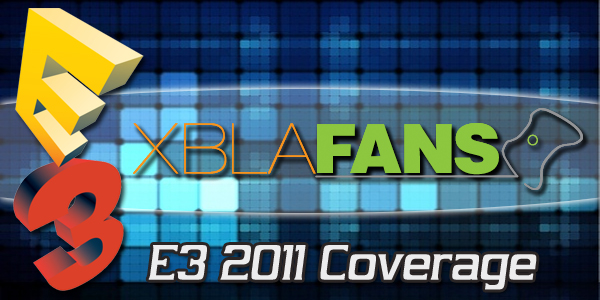 E3 is upon us again, and XBLAFans has your Xbox Live Arcade coverage. We’ve got four of our talented staffers on the show floor and the rest of us are holding the fort down here on the site. Check back frequently as XBLA Fan breaks Xbox Live Arcade news and previews upcoming games. All our E3 coverage can be found below. Make sure to follow us on twitter and like us on facebook as well.

Thursday: Man, as busy as we’ve been E3 is just flying by. But what a great year it’s going to be for Xbox Live Arcade, and what a rush of news! In the past 72 hours our team has been getting hammered with news, and we’ve put out a record 38 articles in that time. The best news is there’s more to come. We’ve got over 25 games we’ll be previewing in the coming weeks along with interviews, special developer guests on our podcasts, giveaways and more! Time to dig our heels in for one last awesome day at E3. At this point we’re keeping fueled solely by caffeine and adrenaline, but man is it worth it. Time for the gang to hit the show floor! — Steve

XBLA developers representing in the top 100

An explosion of Dungeon Defender information

Wednesday: Last night ran super late for me so today’s update is going to be a little shorter. Saw a ton of tremendous XBLA games yesterday. The clear highlights for me were Ms. Splosionman, Skulls of the Shogun, and Skull Girls (apparently its a good year for female protagonists and skulls). All three are beautiful, innovative and feature tight controls. Hard to ask for much more from a game. Since we only have a few people at the show preview coverage is a little backed up, as we are literally meeting with people from 8AM to 2AM; however, in the next couple weeks expect to find more detailed XBLA coverage than you can find on any other site. — John

Mercury Hg confirmed for this Summer

More Bastion is always for the better

How Skullgirls gets very detailed animation

Tuesday: Last night was absolutely incredible. Not only were we one of the select few chosen to check out the Microsoft Showcase, but afterwards we went out and talked with numerous XBLA developers and publishers and just had an all-around awesome time. Huge thanks to the guys at Microsoft, Halfbrick, Zen Studios, Obsidian, Ignition, Ska Studios and Fuel Cell Games for putting up with us and taking the time to talk games.

We had the opportunity to take all of the Summer of Arcade titles hands on, and I can promise everyone they are in for a treat this year. Bastion is incredibly unique and doing things totally different than a typical game from the action RPG through both innovative story telling and gameplay. The only way to describe Insanely Twisted Shadow Planet is to call it art. Michel Gange and the development team for the game have pushed the boundaries on what animation for games can be. Fruit Ninja Kinect takes a highly exciting iOS franchise and brings it to the living room on the big screen. Utilizing Kinect, the developers have made the game in a completely new and exciting way. The team at Signal Studios has perfected the formula with Toy Soldiers: Cold War. Last year’s smash hit is back with dozens of new features, beautiful graphics and even tighter gameplay. From Dust allows players to play as God with all of the elements of the earth as they try to help a tribe of people survive. The physics behind this game absolutely astounds me. We will have detailed write ups on each of these games later on in the week. — John

Croteam getting Serious about an XBLA Release of Serious Sam 3

Breaking News: Anything With an Engine is anything but downloadable

Even more ‘Splodin in this new Ms. Splosion Man trailer

You too can be a fruit hating ninja

Monday: E3 hasn’t even officially started, and we’ve already had plenty of exciting news. While the Microsoft Press Conference was largely devoid of XBLA games, we did learn a lot about the new dashboard update for this fall. The usual suspects were all in the building with Call of Duty, Halo Anniversary, Mass Effect 3, Ghost Recon, Fable: the Journey and Halo 4 headlining the conference. Microsoft has pushed all in with Kinect and has clearly emphasized this to its third party partners, as EA and Ubisoft had some cool, ancillary Kinect features. And nearly every first party title seemed to be built around Kinect. Tonight we are going to another Microsoft Event where will have the opportunity to check out many of the games being published by Microsoft Games Studios. Hopefully we will see the Summer of Arcade lineup which was announced earlier today as well. We can’t wait to hit the show floor and start posting hands on coverage of XBLA titles. Let us know if you have any questions you want asked!

And so it begins again