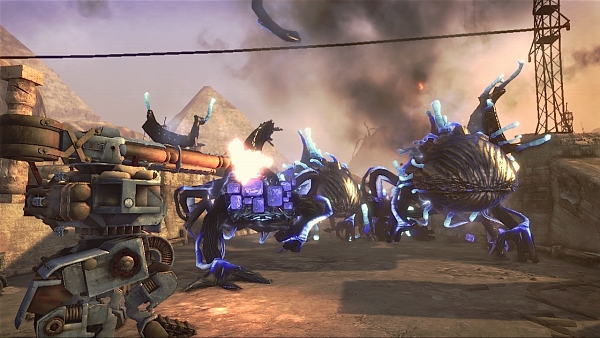 With only two weeks until release it looks like Trenched still has a few tricks up its sleeve. The hybrid mech combat/tower defense game has some very promising systems in store for players who plan of taking the war online. One of the bigger bullet points when Trenched was first revealed was the ability to customize your mobile trench units to induce destruction in the way that you see fit. To build off of that idea, Double Fine has implemented an upgrade system similar to those in the FPS genre, using specific weapons or completing a goal to earn unlocks for a class of weapons. While this feature is fairly standard these days in games like Battlefield, it was certainly a nice surprise to see that kind of depth in Trenched.

What is more surprising than the addition of unlocks is the innovative Regiment system. As you play online in Trenched, you’re likely to play with your friends or meet people that you like to play with. What Regiment does for the player is develop a support system for those who play together. Tying into the unlock system, those who are a part of your Regiment and vice-versa are entitled to unlocks that have been made available barring a level restriction. While not all of the highest tier weapons will be usable to someone new to Trenched, some upgrades that wouldn’t be be there from the start will be unlocked. Also, even if you aren’t able to be online at all times friends in your Regiment can unlock artillery for you even when you aren’t playing.

Double Fine has obviously thought about how to make multiplayer more accessible, and with systems like Regiment they could be the innovators the industry needs in the online space.