This Lord of the Rings MOBA was built from the ground up to be about the action and overall have shorter match times than other games in the genre. To achieve this, the foundation had to be set with the controls. While the answer to how a MOBA would work on a console has been of some debate lately, Monolith claims they had a rather easy time with it. Compton told us that “putting the player in direct control was a really satisfying experience. Using the left stick and “driving” the character around on the battlefield, rather than clicking and orienting your character that way.” Using rectangular, wedge and circle attack radii all aimed with the left stick, the game achieves precision even without a mouse.

Several mechanics contribute in tandem on top of the control scheme. “We decided to have 3/4 abilities available [from the start of the match]… you feel more powerful right out of the gate and have a feel for what this guardian is capable of doing.” Like any MOBA, the action is layered between the “meta” of the game, or the overall strategy determined by the specific guardians being used in each particular match. To pressurize the gameplay in Guardians of Middle-Earth, Monolith has developed a sort of meta-sandwich. Sounds delicious, right? 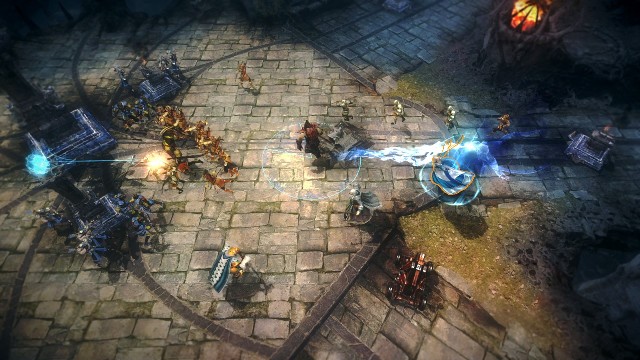 Of course, to begin with there are five different classes, and each guardian within that class has a different playstyle. “We wanted to move the meta-game outside of the match to the in-between match time. You need to react to the other team,” Compton told us. “When you’re matchmaking, you have a window of time where you know who you are going up against so you can gear yourself to deal with that.” During this window of time you can see the enemy guardians and adjust your runes, or passive bonuses, accordingly.

That’s the top layer of the sandwich. Under the action is a focus on the battlefield itself. In most PC MOBA games, there’s a “laning” phase where players focus on gathering money, experience, and generally just trying to stay alive. According to Compton, in Guardians of Middle-Earth “the laning phase is rather truncated. In the first few levels there’s some laning going on, but it’s very easy for poeple to start roaming and… see more clustering in one given area for control.” To seal the meta-deal, as you level up you can upgrade both your towers and minions to counter any enemies who have been dominating your lane.

Guardians of Middle-Earth is aiming at a fall release, and there’s still a 10+ characters, from familiar to obscure, that we’re waiting to hear announced.