Well. Mostly. There’s no hiding the core MOBA-ness of this game, but the developers at Monolith also want to bring new mechanics to the table and tailor the experience to the console. For instance, you can upgrade your minions and towers, but there’s no shop and there are shrines to fight over which grant buffs. How’s that for new mechanics? 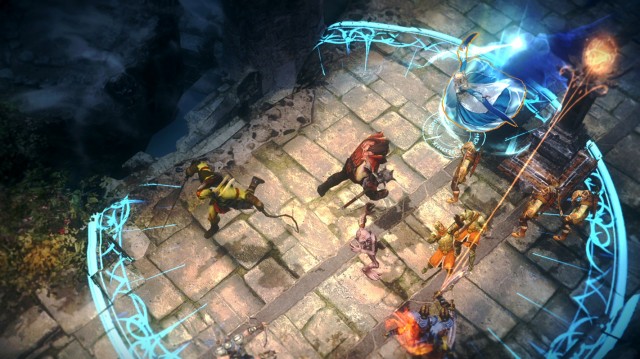 Each match in Guardians of Middle-Earth aims for around a 15 – 25 minute game, but since E3 is a busy place ours was limited to 15 Unlike most MOBAs however there is a scoring mechanic built into the game so matches can be judged fairly when the time limit is reached. Destroying towers counts for the most points, then guardian kills, then finally first blood is the tie breaker; being the first to go could cost your team the game!

I sat down on the side of good for my demo and donned the role of the mighty Gandalf. While the demo was setup to be good versus evil, one of each character, any mix of guardians will be possible in the full game. Like most MOBAs, the map was divided into top, middle and bottom lanes. I chose bottom lane with Hildifons, the good’s current “Warden” class.

In Guardians of Middle-Earth roles are a bit more defined. Gandalf is a mage and comes with big areas of effect and damage, but low survivability. My lane partner was a Defender (a title Monolith said is likely to change) who excels in lane control with a strong ability to push up to the enemy tower. Other roles include Strikers (damage), Warriors (tanks/fighters) and Defenders (support, ridiculous level of survivability). 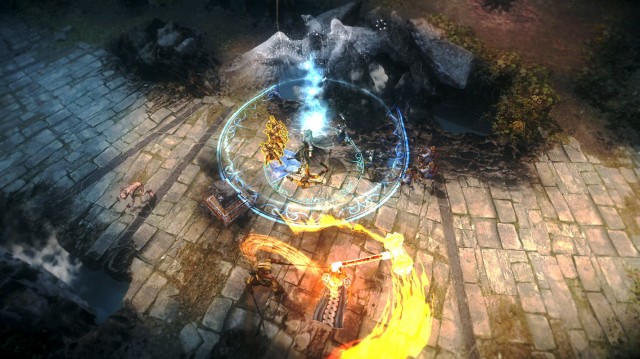 Honestly I have no idea what Hildifons did during our demo. Since it was my first game, I just relied on my own skill set. Some of these spells are throwbacks to the movies/books, like Gandalf’s ultimate, Fireworks. For the most part I relied on his powerful single-target stun at the beginning of the game, upgrading it as much as possible as I leveled up. Leading with a blinding attack that does damage over time, I’d follow up with the stun and by then the enemy was severely hurt. I picked up quite a few kills early thanks to that stun and the fact that Golum is super squishy — that is, he has low survivability. He also has a really low body mass index, so that may be it as well.

As the game progressed, Sauron was wandering around ganking the other lanes. Every time he came into my lane there was this sense of a glorious battle. The back and forth of massive spells and the assistance of the other characters gave tension and ambiance to what is otherwise a very gameplay-focused experience. I tunnel-visioned hard on the bottom lane and took the first tower and both shrines next to bottom, but that’s all I know we did. Eventually I started helping out mid, but by then the game was almost over. I ended with 9 kills, 4 deaths and quite a sense of accomplishment.

There are a few things that really stood out during my time with Guardians of Middle-Earth that excite me. Starting with your three main abilities at level 1 (you get a fourth at level 5) means you can instantly perform your role; there’s no having to wait 5 – 10 minutes for the game to actually start. Health pickups being scattered across the map means you don’t have to return to base constantly, and really helps up the pace of the game. Lastly, despite not having a cursor, skill use was pretty precise, I always managed to hit who I wanted and had no trouble pulling off complex MOBA-style maneuvers. After our match we attended a briefing about the game which shed light on what just happened. This hands-off unveiled more to the game than just the leveling and map control. This is when they explained the minion and tower upgrade options, so unfortunately I did not know about them while I was actually playing. Since the game has no currency or shop system, they explained how they handled the customization element of their MOBA.

Command skills and potions are the active aspect of the customization. Command skills are powerful skills with very long cooldowns that are meant to be clutch abilities. I had one that launched a massive eagle, doing good damage to a gigantic area and a speed boost I used a few times to escape death. Potions are attached to the D-pad and are single-use for the entire game; again, this is a feature for clutch moments. The potions vary in type as well, but I only ever used the healing potion.

The final touch in Guardians of Middle-Earth‘s customization options, and the most interesting, is the gembelt system. These gems alone grant small bonuses such as additional speed or resistance, but they really excel when placed in specific orders. Placing gems in precise sequences form relics. Relics add passive abilities which activate based on your actions. These abilities vary widely, from having every third basic attack be a stun to reducing all your cooldowns as you use your abilities. However! One does not simply wear their gembelt to battle. Each gem in each slot is unlocked every other level, so the size and order of your relics and gems is important to your progression throughout the match. 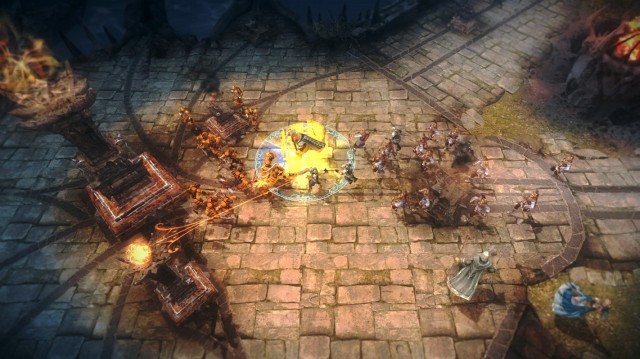 As you play matches in Guardians of Middle-Earth you’ll earn coins and experience. Experience raises your rank and unlocks more command skill and potion slots. Coins are used to buy more types of potions, command skills, gems and relics. Persistence is pretty common to MOBA games, and this game is no stranger to that. Guardians of Middle-Earth invites players to compete in ranked Battlegrounds on either 3 or 1-lane maps or play in Skirmishes cooperatively against bots.

While it’s no League of Legends or DotA 2, Guardians of Middle-Earth is a MOBA for the core MOBA fans out there. Sure you’ll enjoy it if you like Lord of the Rings as well, but it’s not an adventure nor an exploration of canon — besides, aren’t you tired of that by now? This game is something unique to consoles, and it’s showing ridiculous amounts of potential. This is lane control, this is map awareness, this is MOBA- THIS IS… oh, wait, wrong movie.