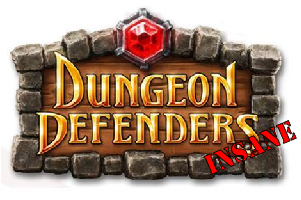 Welcome to the XBLAFans Dungeon Defenders Insane Challenge Guide. We would like to thank RhinoStarr, ThC x LeThaL and the multitude of people who filled the fourth spot for their tireless work, without them this guide would not have happened. The original guide was targeted at the easy – hard difficulties, the reasoning for a completely separate guide for the hardest difficulty challenges is that Dungeon Defenders is really broken into two parts. Early game and end game, insane is of course end game.

It has completely new drops, new formations of waves, MUCH harder enemies and requires the most intense team work imaginable. If you want to go the whole nine yards and complete all insane challenges, be prepared to sink in many hours and start to form a regular team.

You will need very specific character set ups, turret placements and equipment to pass many of these levels. Not to say you might get lucky with some of them, it won’t happen with them all though. The guide will work under the assumption that you know the levels and emplacements mentioned, as well as a fluent understanding of characters and items. If you don’t then we suggest you continue to level your characters and gather equipment.

If you are on the cusp of being able to begin your insane adventure but still need to polish some characters, then take a look at our Insane Preparation Tips page, it will show you where to grind for the fastest exp and the best loot.