Awesomenauts is a MOBA game, first and foremost, and a 2D Brawler second. However, while we can explain strategy, tactics, and even all the way down to how to control your character, there’s no accounting for your ability to react, target and survive. Here’s the disclaimer: reflexes are a huge part of this game and we cannot teach them, knowledge only takes you so far.

Welcome to our tutorial on Awesomenauts. The game includes a tutorial, which you should play, but we’re going to cover that material anyways. Because ours is more awesome.

The Objective – The goal in Awesomenauts’ only mode is to destroy the other team’s Solar Drill. Depending on the map, each drill is defended by a number of towers. These towers have a lot of health and dish out a lot of damage to the enemy closest to it. Destroying towers is the only way to get to the enemy’s Solar Drill. Note that not all towers need to be destroyed in order to attack the solar drill, just the ones directly in front of it.

Your character – Awesomenauts has several heroes with their own unique abilities and upgrades. Different heroes accomplish different things and can be built in many different ways. It’s important to understand the capabilities of each character (see below) both for your own use, for supporting your team mates, and for defeating your enemies.

Building your character – There are myriad ways to play each hero as they all have different capabilities. As you level up your actual account (to a max of 45) you unlock new upgrades with which to customize your loadout for each character. These loadouts consist of three upgrades for each ability, three for the basic attack and three general upgrades. Depending on the upgrades you bring into battle, your character’s role can change drastically, but here’s the gist of each character:

Staying alive – While two of the heroes in Awesomenauts can heal their team mates (Yuri and Voltar) and everyone but Froggy G can modify their abilities to heal themselves, it’s important to stay healthy as much as possible. Every map features neutral monsters, and every neutral monster you kill gives you 30 health back. These monsters respawn fairly often and usually in contested areas, so kill them often to stay at peek condition.
Dying is almost never worth it!
Consider the math: two deaths to one enemy puts them a full level above you on bonus cash alone; four deaths means the entire enemy team has earned at least a level above of you. Don’t die if you can help it. Dying to get three enemies killed is worth it; dying just to do a little damage to an enemy turret is not.

Solar (Currency) – In Awesomenauts, money is incredibly important because there is no experience; only cash. Your hero’s “level” is the sum of its acquired money divided by 100 and rounded down. I.e. if you’ve acquired 354 solar so far into one particular game, you are level 3. Leveling has no inherent benefits, only spending money on upgrades affects your character.

There’s a lot to do in Awesomenauts, so we’ve made a nifty chart of things to be perpetually aware of: 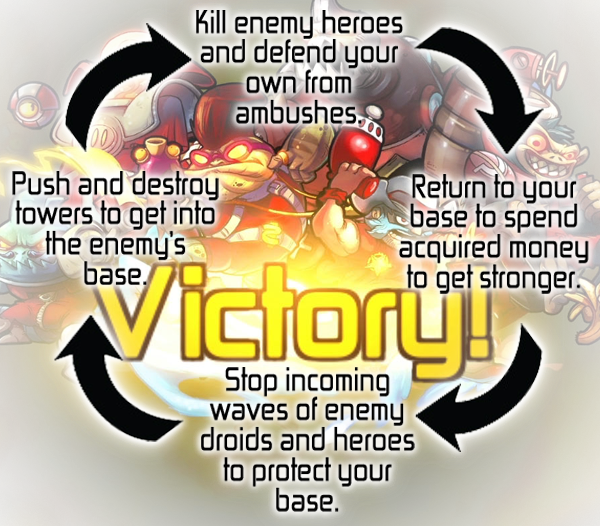