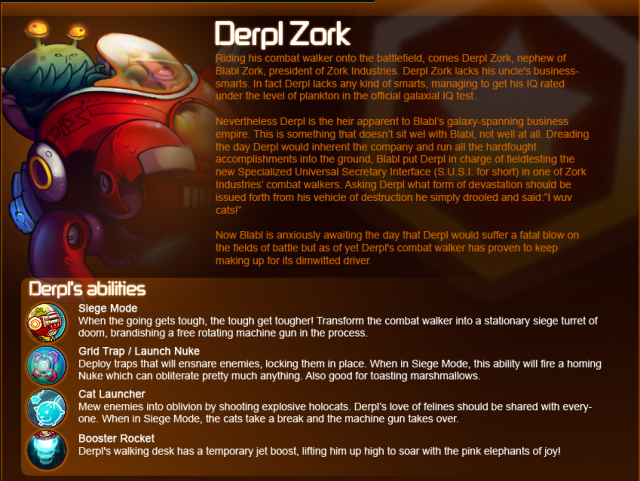 Special 1: Siege Mode – Derpl’s Siege Mode skill when activated turns his combat walker into stationary turret. While the turret can be moved by attacks and other moving objects, he cannot move himself while deployed. In this state, he fires bullets similar to those fired by the turrets featured in the game with stats independent of his basic attacks. This ability has a lot of gameplay elements to consider when using it due to the cooldown and immobility. Without support, it may not be a good idea to deploy into siege mode, but Derpl wins many a fight with unsuspecting enemies if he has the shield upgrade. When he’s deployed his second ability, the grid trap, becomes a nuke which tracks enemies and explodes for massive area damage. This is Derpl’s main feature, so learn it well.

Special 2: Grid Trap / Nuke – While outside of siege mode Derpl can deploy traps which ensnare any enemy who enters it. Be careful when using these because amongst those affected are enemy droids and even Voltar’s drones or Lonestar’s bull (this is actually a great counter). This ability has a ton of utility, and while the obvious use is for defense, it can be used to pick up easy kills on overconfident enemies. Place these traps near you; even with upgrades, they won’t last long enough for you to do anything about them if they’re too far away. Since they don’t do any damage, it’s important to follow up on activated traps with a quick nuke, or at least some heavy turret/cat fire. These things will save your bacon a million times and more.

Derpl can fit a few roles and has many strategic syngeries. Using grid traps really helps box in the enemy and manage the lanes, while the siege mode turret damage is ridiculously painful, but we can’t do everything in one build. As such, our build focuses on the long-game, winning with pushing and tanking.

We’re going to focus on these things:

Derpl’s early game can be very tough depending on the enemy team. With very limited range and a large hitbox, Derpl is a pretty big target. His basic shots don’t do nearly as much damage as Clunk’s, so it’s important to play conservatively early on. Get grid trap as soon as possible so you can be of some service to your team. Use grid traps to keep the enemy off your tower if you’re being pushed, or place them between you and their tower if you’re pushing well. This strategy is pretty simple, but exemplifies the use of grid traps for the rest of the game; lock the enemy in or out of important push-related locations. Also use them to stop chasers.

Moving forward, take points in siege mode then max out your entire bottom shelf. You may think “Well then I’ll have no damage!” and you’d be right-ish, but Derpl’s nukes will bring plenty of damage when you need it. On top of that, staying alive is very important for Derpl due to the speed of his development (this build maxes out at level 36) and the cost of making it to “useful” with him. Once you’re nice and tanky you’ll be able to stay in lane for lengths on end, pushing and counter-pushing incessantly. Max out siege mode next, focusing on shield so you don’t die getting too crazy (you’ll get pretty crazy).

Mid-late game is where Derpl gets super fun. Protip: Derpl can drop through glass platforms even while in siege mode. This can be used as an escape, to chase dropping enemies, or simple to show up in the middle of a fight instead of having to run into it. Be careful not to extend past your team mates when doing this. That said, being right in the fight (with your ridiculous shield) means you last a long time and draws the enemy’s focus, leaving your team mates free to pile on the damage. While all this is going, focus down (with your bullets) the strongest threat, usually Lonestar or Leon, and fire off a nuke as early as possible. Just remember, doing this means you’re pretty much in it to win it; if you die, you die, but by this point you should be plenty farmed and your team mates will be able to run clean-up.

Towards the end of the game, just max the nuke and push like a boss. Popping out 85 damage over a huge area every 10 seconds is pretty dang scary. Use grid traps to stop enemies from running behind you; force a fight, or force the push. Derpl is all about presence, like stomping loudly around snakes to get them to fear you, he fires nukes and doesn’t care who blows up.

Derpl snowballs hard when he’s losing — meaning he goes from useful to useless pretty quickly. Thankfully, the “I’m losing” strategy is pretty simple. Let the enemy push, counter push from the safety of your turret. Going into siege mode is a good idea, but if they have a Leon be careful because he can pull you while you’re deployed. It’s important not to extend out too far because Derpl has no escape mechanisms, only ways to stop chasers.