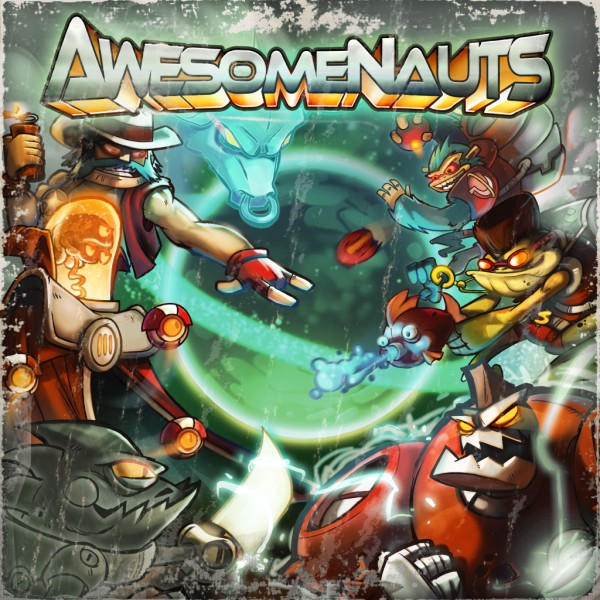 If there is one thing that Awesomenauts has reminded us of it’s the fact that the ‘80s were awesome. In fact, even the fictional ‘80s characters of Awesomenauts seem way cool. Despite some earlier uncertainty, Awesomenauts launched on Wednesday, May 2. The title looks to try to revamp the Massive Online Battle Arena (MOBA) genre on consoles. Outside of a brief flirtation with Monday Night Combat, MOBA has largely kept to its PC roots (think major success League of Legends and one of my personal favorites, Super Monday Night Combat). If you’re unfamiliar with the genre we highly recommend checking our XBLA Primer on MOBA. If you are on the fence with buying the game, check out our review.

We were huge fans of the game at PAX East so when the opportunity came around to throw a giveaway related to the game we were ecstatic. We’ve teamed up with Ronimo and Sonic Picnic for a pretty exciting giveaway totally deserving of the ‘80s: we will be giving away EIGHT vinyl records (pictured above). On the front side, the record contains an exclusive version of the complete Awesomenauts theme song and a fitting drum & bass remix. The B side contains a mega mix of all the songs in the game.

The last TWO will be available through Twitter and Facebook respectively. We want to get the word out about this, so everyone who likes our post  about the contest on Facebook and everyone who shares the following tweet will be entered for a chance to win a copy.

In order to win one of these beauties on our site, all you need to do is comment below with which character you are looking to play as in Awesomenauts. While you’re at it, you should probably familiarize yourself with the maps and how to play as well.

The contest will run until Friday May 18th. You may enter once on each website.