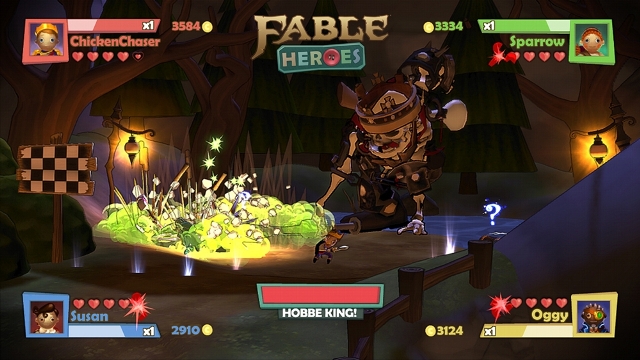 It started innocently enough, which is appropriate given the the innocent faces featured in Fable Heroes. Tim Timmins, who worked as a scripter on all of the previous Fable titles, and a handful of his co-workers said to each other “Let’s make a Fable game!” There was no Molyneux-esque bravado about crafting the greatest RPG of all time. Instead, Timmins and company were content with just making a game of some sort in the franchise they knew best. The next thing they knew, they were set up in their own offices with more than a dozen staff members working under them on Lionhead Studios’ first XBLA title.

“Every year at Lionhead we have a Creative Day where everyone gets together and can make whatever they like,” Timmins explained to Xbox 360 Achievements. “It can be a game, a new piece of tech, it can be a tool, it can be a PowerPoint presentation of the greatest thing ever made… We decided to make a game.”

“It started off with me and my friend Jon chatting over a coffee,” Timmins continued. “We said, ‘Wouldn’t it be cool to have a 4-player Fable?’ And it was like ‘Ding!’ So we went away and grabbed four other guys and we said, ‘We’ve got this crazy idea of doing a retro feel Fable game.’”

Convincing four video game designers to work on a video game was easy and stress-free, but the real test came next: Timmins had to present the first level of their game to Peter Molyneux and Louise Murray, the steward of the franchise. The two took to the game immediately, with Murray describing the work-in-progress as “awesome…and unexpected.” After a few days had passed, they were given the go-ahead to move into full production. 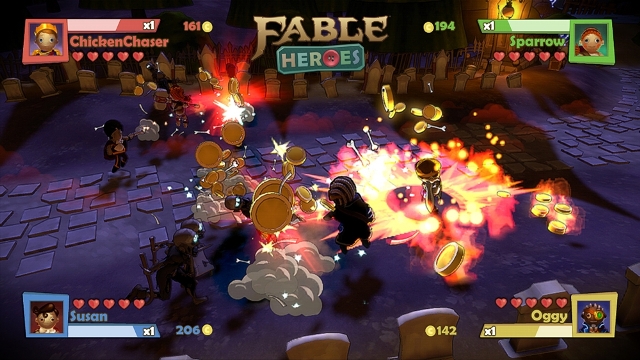 Although they were developing the game in isolation from the majority of the Lionhead staff, word soon spread and suddenly everybody seemed to want in on the action. So popular was the project, that certain elements of it ended up being created by contributors who volunteered to put in some work during their own free time.

“I’ve tried to create this open forum design feel,” Timmins said of his management approach, “where if people think the game needs balloons, or slippery ice, or exploding heads, we’re like, ‘Yeah, just do it.’”

With just over a month to go until Fable Heroes‘ May 2 release, it indeed looks as if they have just about done it. The public will get its hands on the game for the first time next week during Boston’s PAX East convention. For those not making the trip, keep your browsers pointed right here for our preview of the demo Lionhead brings across the pond for the weekend.

Molyneux on next Xbox: “I just want the ultimate gamer’s device...

Read More
Molyneux on next Xbox: “I just want the ultimate gamer’s device”