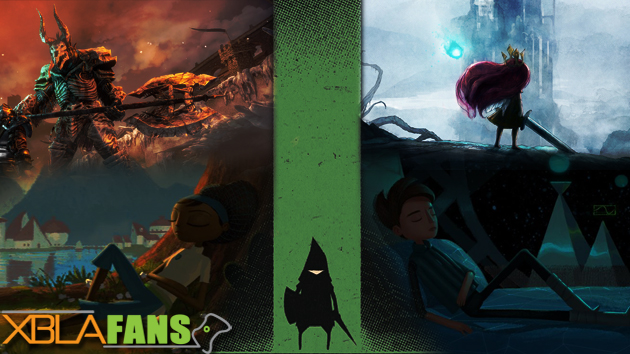 Blood of the Werewolf

In Blood of the Werewolf you play as Selena, a loving wife, a caring mother and a bloodthirsty werewolf. When monsters kill her husband and kidnap her child, she must use her powers to slay everything that stands between her and her baby. During the day you’ll play as a human, but once night falls you’re transformed into a powerful beast. You’ll venture through a post-war city run by classic movie monsters: Frankenstein, Mummy, Mr. Hyde, Creature and Dracula. The game comes filled with 10 unique worlds, 34 terrifying monsters, five boss arenas and a scary amount of collectibles. The game is already out on Steam and has been received well, with many noting that Blood of the Werewolf is quite challenging. If you’re not prepared to yell at your television and throw your controller, this game may not be for you. Blood of the Werewolf will tear its way onto XBLA in early 2014.

Bound by Flame is a fantasy RPG with a big focus on combat and choices. You play as a mercenary who, when trying to become more powerful, became possessed by a flame demon. As a result, he constantly has to pick sides between his humanity or the demonic powers, and the choices he makes will have an effect on both the story and his powers. Giving in to the demons gives you more strength, but your blackened soul will have an effect on your outward appearance. You’ll also have to choose how to level up your character; do you want to focus on fighting with two-handed weapons, or do you prefer the stealthier route and using lots of daggers? You’ll be fighting hordes of the undead, demons, dragons and all sorts of terrors – so be sure you make your decisions wisely. Bound by Flame is coming early 2014. Which side will you choose?

Not too long ago, Double Fine began a Kickstarter for a brand new point-and-click adventure game, a genre that has been all but forgotten. Its campaign was a massive success, and now the double coming-of-age story Broken Age is almost ours. A girl is chosen by her village to be sacrificed to a monster, but she does not accept her fate and decides to fight the beast. A boy is living alone on a spaceship, cared for by an overbearing computer, wanting to break free and have his own adventures.

Broken Age marks Tim Schaffer’s return to the genre, as he previously worked many Lucasarts classis such as Full Throttle and Grim Fandango. The classic genre is brought into the modern age with a wonderful art style and a voice cast filled with celebrities, including Elijah Wood and Jack Black. This crowd-funded game is also a crowd-pleaser; Part 1 has already been released on PC to critical acclaim.

Ubisoft’s UbiArt Framework has done a great job at bringing Rayman’s world to life, but the engine will be taking on a whole new beast in Child of Light. Aurora is a child who wakes up in the mythical world of Lemuria, a mystical world darkened by the Black Queen, who stole all the celestial bodies from the sky. Aurora has to save the lost lights and defeat the evil queen if she wants to see her loved ones again, but she doesn’t have to do it alone. A second player can take control of Igniculus the firefly, who’ll aid Aurora on her adventure. The game plays like a classic RPG; if you want to survive turn-based combat against powerful foes, you’ll need to level up stats, gain new skills and craft more powerful weapons. Child of Light will be available for both Xbox One and Xbox 360 on April 30.

Cyborgs and slow motion — need we say more? Cobalt is a side-scrolling shooter that puts you in the metal shoes of a cyborg. Bullets, rockets and various other projectiles will be flying everywhere, but whenever you’re in direct danger time slows down to give you the opportunity to pull off amazing, life-saving maneuvers.

The game features an Adventure mode that can be played single player or cooperatively. On the competitive side, there’s Deathmatch, Survival and Capture the Plug (aka Capture the Flag), so you can fight your friends while showing off your Matrix-style moves. Cobalt is being developed by Oxeye Game Studios, and is the first third-party game to be published by Mojang. It is currently in alpha on PC, so while it is confirmed for XBLA, it may be a while before it arrives.