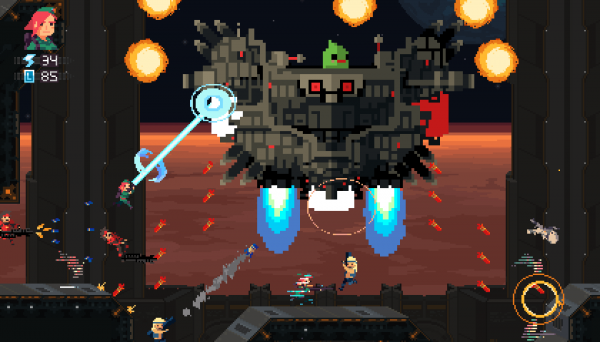 Super Time Force has unfortunately been slightly delayed, but the reason is so that developer Capybara Games can make a version for your shiny new Xbox One via the ID@Xbox program. The game is now set to release in early 2014.

Capy was determined to release Super Time Force this year, but it decided to go for a simultaneous release on both Xbox platforms during the next calendar year. Speaking to Joystiq, Capy co-founder Nathan Vella said, “As 2013 waned and the ruckus around new consoles got louder, we decided that launching on both the Xbox One and Xbox 360 would be the best way for Super Time Force to get out there. We really believe in our game, and we’re happy that ID@Xbox gives us a chance to bring it to players who made the jump.”

Super Time Force is a side-scrolling arcade shooter in which players take control of a spunky squadron that can use time travel to gang up on enemies and save each others’ lives. It’s one of our most anticipated XBLA games.

Confused about how it works? See the game in action in this gameplay trailer, learn the basics in this Super Time Force 101 trailer, and read about how the team resolved temporal paradoxes. Read More
Below preview: How far are you willing to go?
Top