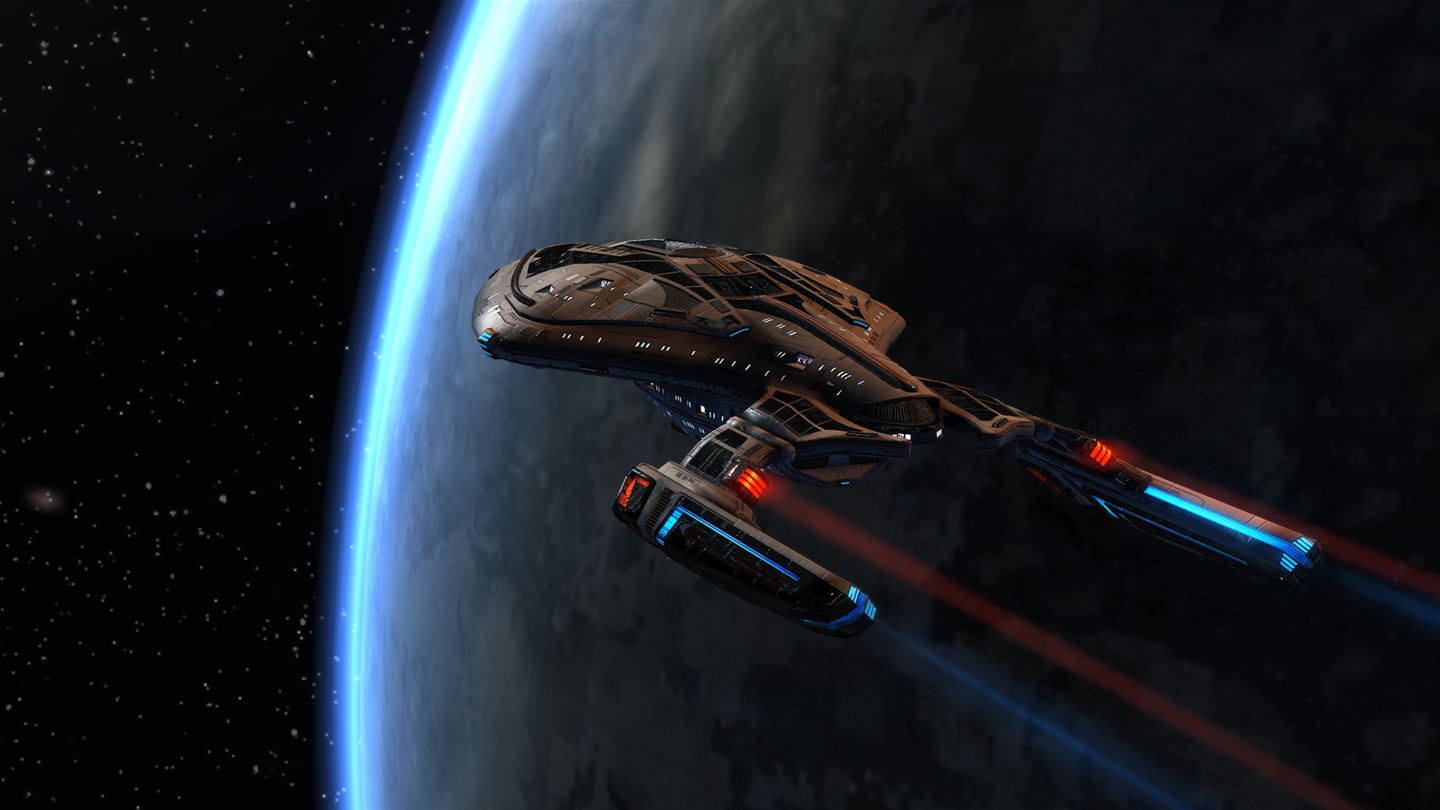 I’ve always loved the Star Trek series, especially the era of The Next Generation. However, despite its deep, rich lore and vast, eager fan base, Star Trek has always struggled to deliver high quality video games. Star Trek Online represents the first series outing on the Xbox One, and it takes the form of a free-to-play online role playing game that splits itself in two: ship based navigation and ground based third person exploration. Combat plays a part in both, giving the game two distinct identities that are married together by the storyline and mission structure.

To its advantage, Star Trek Online benefits from a very robust use of the license. Characters from relevant series’ (such as The Next Generation, Enterprise, Deep Space Nine and Voyager) appear in the game, and are often voiced by the original actors who played them. Many alien races are present, along with suitable ships, buildings and so on. This authentic use of the license is excellent, but players will need to decide for themselves whether or not the game that sits beneath it is befitting of Roddenberry’s creation. As an online RPG, Star Trek Online aims to strike a balance between creating interesting scenarios for cooperative play, whilst also providing solo players with something to do on their own. As a result, like most similar games, a few compromises have had to be made. 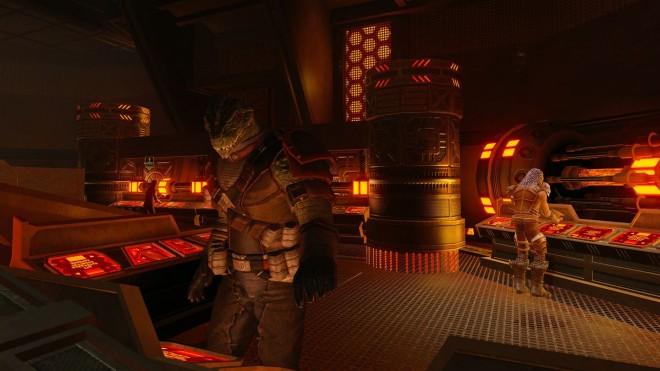 Klinging-on to the license – As a Star Trek fan, there is no doubt that the best bit of Star Trek Online is seeing your favourite races, ships, planets and cities recreated in game. There’s no doubting their authenticity either, because the look and feel of the Star Trek universe (prior to the JJ Abrams films) has been recreated admirably. Players create a character belonging to either the Klingon Empire, The United Federation of Planets or the Romulan Republic and can pick from a number of races within each of those factions. This choice dictates the starting location and initial story arc, and each is as well featured as the others, with entirely unique characters, locations and missions to undertake. All of these use the Star Trek lore to its fullest extent, and if, for example, you choose a Klingon race expecting a tale of bloodlust, honour and vengeance, you will not be disappointed.

Change-ling experiences – Later in this review, I’ll talk about the fact that neither of the gameplay styles that Star Trek Online offers is perfect, but despite that, there is a lot of variety and content here to explore and have fun with. Ship based activities largely include navigating around a huge, authentic map of the Star Trek universe to undertake missions, track down bounties, collect cargo and generally do Star Trek stuff. The ground based sections, referred to as “away team missions” are a bit weaker overall, but provide a welcome change of pace. Players choose their away team from an ever-expanding crew of ship’s officers, allowing the selection of a best mix of classes and skills. Missions largely involve running around a wide variety of locations eliminating enemies, hacking terminals and completing straightforward objectives which vary in flavour depending on your chosen faction.

Federation of cooperation – Clearly, as this is an online RPG, the main focus is on collaborative play. In Star Trek Online, this is known as creating teams and/or fleets depending on the gameplay mode used. The system works well, with easy mechanisms for asking random folk to join your team, or for joining missions that are already underway. Such missions occur both in space and on the ground, allowing for a decent bit of variety. Tactics are hardly high on the agenda, but playing with likeminded folk is nonetheless enjoyable. There is a player vs player mode, but I was not able to test it extensively at the time of writing, although I can say that it also takes place across both space and ground based missions, and is centred around the war between the Klingon Empire and The Federation, with the Romulan Republic acting on either side as it sees fit. 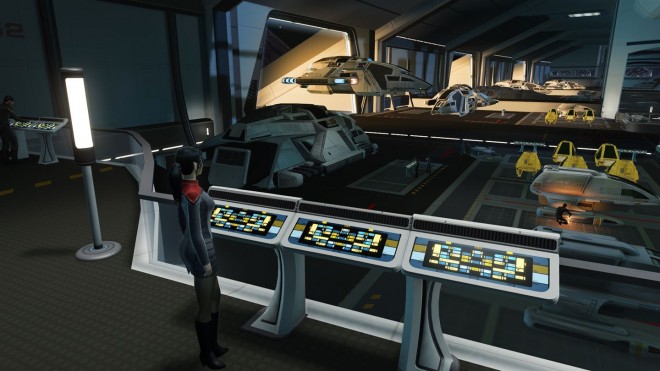 Impulse engines only – Whilst I enjoy the variety that Star Trek Online offers, the inclusion of two fundamentally different gameplay modes does lead to compromises. I found the ship based missions to be the most enjoyable, but even so, there are limitations. Firstly, navigating around the map (as large as it is) is a bit confusing, a bit slow and a bit clunky. Once a course is plotted, ships ponderously fly themselves very slowly across the map without any further input from the user. The options for fast travel – or perhaps more appropriately, warp speed travel – are strangely limited to the players home system only, yet there is rarely anything to see or do between some of the more far reaching mission locations. Being British, I usually make a cup of tea during these sequences. Ship based combat is more fun and looks great, but it does lack interactivity. Once the enemy is engaged, players hold the right trigger to automatically fire at the targeted enemy as long as it is in range. As players progress, they gain access to Captain Skills that enable benefits in battle such as boosts to weapons or shields, and these must be used tactically in battle, as well as shield maintenance, ship orientation and use of weapons like photon torpedoes.

Phasers locked to stun – Away team missions tend to provide most of the story content for each faction. This content is good, but the third person shooting and running around is very, very basic and reminiscent of a game that would have been average at best several years ago. As an aside, Star Trek Online debuted on PC in 2010, so it’s no surprise that it has gathered a few cobwebs. Having been recently revamped, it doesn’t look too bad, but the core mechanics are the issue. Players roam around the various planets, ships and stations shooting and interacting with stuff, but it’s all very disconnected. Press the left trigger to auto-aim, hold the right trigger to shoot; rinse and repeat forever. Much like the in flight controls, the only additional input required from the player is to activate special skills and abilities, or to use the very limited set of evasive maneuvers and team commands. It’s functional, but without features like direct aiming and snapping to cover, the gameplay becomes very basic.

Mercy mission – Many of the missions in Star Trek Online are dull or contrived, with one early example being a Klingon Empire mission to track down an escapee on a prison planet. Once all hell inevitably breaks loose, the player receives a secondary objective to quell rioting prisoners. This manifests itself as having to exterminate every single prisoner in the area, even though they are largely unarmed and barely aggressive due to the cack-handed AI that causes them to hang around looking sheepish, rather than attacking, escaping or doing anything at all that requires quelling. On the duller side, there are tons of fetch quests and lots of grinding options, which I suppose is normal for an online RPG, but it’s still notable that I found them fairly repetitive. 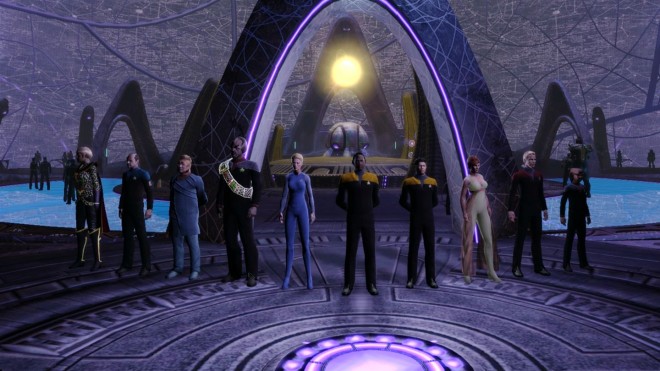 Scoring Star Trek Online is hard because whilst it is a very basic, outdated and often boring gaming experience, it has a few key things going for it. Firstly, it is entirely free and I haven’t found any major pay walls to contend with. It does offer excellent use of the license. It is also fun with a few friends floating around the galaxy to play with. It doesn’t offer high octane thrills or cutting edge graphics, but fans of Star Trek (especially the core storyline following The Next Generation) should visit to see if it hooks them, whilst others looking for perhaps a more dedicated shooting or space faring simulation could do better elsewhere, albeit at a cost.

Star Trek Online was developed by Cryptic Studios and published by Perfect World Entertainment on Xbox One. It releases on September 6 2016 and is free to play. An early access copy was provided for review purposes.