By now you’ve surely heard that Microsoft announced a pair of new games consoles at its E3 media briefing earlier in the week. Coming in August is the 40 percent smaller Xbox One S with 4K resolution, video playback, a “streamlined” controller and — in some pricing models — a larger hard drive. Then, sometime during the 2017 holiday season “the most powerful console ever,” Project Scorpio, will follow. Scorpio has 6 teraflops of graphical processing power, purportedly enough to support 4K resolution and virtual reality gaming without sacrificing the framerate or other graphical aspects. Oh, and, uh, it also can support other stuff developers want to do. I guess. Maybe. Whatever. (More on that later.)

Gamers sans an Xbox One have two choices: buy the Xbox One S after it releases this summer or hold out a year and a half for the vastly more powerful and expensive Scorpio. Current Xbox owners, meanwhile, have three options from which to choose: stick it out with their now so-last-gen Xbox One, grab the sleeker S or wait it out until they can burn their eyes out counting each of the individual 4,000 horizontal lines of vertical resolution in the inevitable Halo 6‘s title screen. All joking aside, this is a fairly expensive decision, and nobody wants to mess it up by purchasing the wrong box. 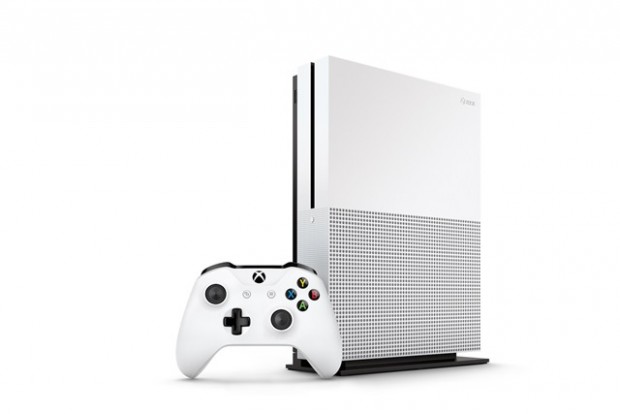 So which box is the “right” one for you? Surely in Microsoft’s eyes it’s the most expensive one or at least the mid-priced S (the standard Xbox One is temporarily on sale for $279), right? Well, actually, not exactly — at least not if you already own an Xbox One. Microsoft’s head-of-things-that-are-Xbox, Phil Spencer, told GI.biz this week that “if you’re an Xbox One customer and you bought that console three years ago, I think you’re a great customer. You’re still using the device. That’s why we focus on monthly active users.”

That last sentence is in reference to Microsoft refusing to release Xbox One hardware sales numbers as of late 2015, which many assumed was motivated by Microsoft not wanting to report that Sony had kicked its butt 10 or 11 months out of the year, and there is almost certainly some truth to that. But Spencer — who is generally seen as being about as forthright as a high-ranking executive at a very public business-to-consumer company can be — reiterated that it’s also because Microsoft’s biggest concern is getting people buying and playing games in its Xbox Live ecosystem. Spencer says he doesn’t give a damn whether you do that on Xbox One, Xbox One S, Project Scorpio or even on a Windows 10 PC, a fourth device about which Microsoft has lately said much in regards to further aligning it with the greater family of Xbox Live-enabled machines.

OK, fine. That all sounds well and good, and even though I refuse to believe that Microsoft not wanting to say “Sony bent us over its knee and spanked us” month after month is the main reason why the company no longer releases Xbox sales numbers, I’m willing to buy into the idea that engagement numbers are as important to Microsoft as hardware sales numbers are. After all, Spencer rightly points out that no console holder makes a ton of profit off selling the actual boxes. They’re just the gateway. The real money is in the games, the services and the add-on peripherals.

Still, isn’t this all just completely insane? When has a company ever simultaneously unveiled two new consoles less than three years after debuting its last one and also told you it doesn’t really care if you buy either of them or even if you don’t buy the current one and just play games on your PC? That would be never. True, Microsoft did launch the Xbox 360 after the original Xbox was on the market just four years, but the first Xbox was basically a highly efficient money-shredding device, costing Microsoft between $5 and $7 billion. Further, by late 2017 the Xbox One will have a significantly larger install base than the original Xbox ever managed to put together. And now you’ve got two new boxes coming but Microsoft doesn’t care if existing Xbox One owners buy them or not, which was most assuredly not the marketing strategy the company had in mind for original Xbox owners when the 360 was released.

What’s in the box?

So just who exactly should be putting aside money for a Project Scorpio preorder? You’d think Phil Spencer would have dropped at least a few hints about that, and you’d be right. In fact, ol’ Phil had plenty to say on that matter. Unfortunately, despite occasionally seeming clear when taken piecemeal, it didn’t make a lick of sense when you looked at it all together. Do you only have a measly 1080p HDTV?

“Then you should buy [an Xbox One S], because Scorpio is not going to do anything for you,” Spencer told Eurogamer. “Scorpio is designed as a 4K console, and if you don’t have a 4K TV, the benefit we’ve designed for, you’re not going to see. Clearly, you can buy Scorpio, and if and when you decide you want to buy a 4K television to take advantage of the increased performance, obviously the console will be ready for you.” 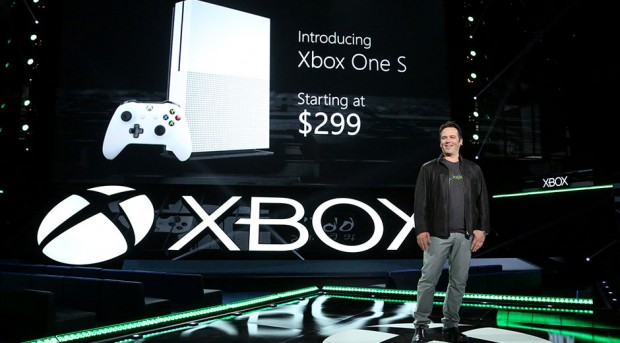 Seems like an open-and-shut case from that quote. If you have a 4K TV, Microsoft wants to sell you a Scorpio. If you don’t, it wants to sell you on an Xbox One S, which will almost certainly entirely replace the standard Xbox One in time. But as great as 60 frames per second at 4K resolution sounds, is that really the only benefit Scorpio will have over One?

Sure, 360 and PS3 brought HD resolutions whereas their predecessors could only play games in standard def, but that wasn’t the limit of their advancements. Among other improvements, we saw bigger worlds with more and smarter enemies when that generational transition occurred. And while Microsoft claims Scorpio is going “beyond generations,” what that essentially seems to indcate is that their next console will play all the games from their current one and allow gamers on both to play with each other. Those half dozen teraflops of GPU power and possible 12 GB of DDR5 RAM packed into its next-gen (lateral-gen?) console have to be good for something more than just improved resolutions at great framerates, right?

It sounds like, yes, yes they are. Spencer, in an interview with fellow Microsoftie Larry “Major Nelson” Hyrb (below), reiterated that Scorpio “will be a great gaming machine for true 4K gaming, giving you a native 4K frame buffer so you can see games in all their beauty.” But he didn’t stop there. “Or, if developers want to use those 6 teraflops in other ways they’re free to do that.”

Oh. So, then his insistence that Scorpio is 100 percent only for 4K TV owners isn’t really true, huh? So it would seem. In trying to clarify the conflicting messaging he had put out there, Spencer went on to tell Giant Bomb that Microsoft, after speaking to some developers like Bethesda’s Todd Howard, “made some slight changes in terms of memory bandwidth and stuff to make sure that we were also a great platform for high-fidelity VR experiences that a console player would expect.”

Continuing, he confirmed that “Scorpio is more powerful than the original Xbox [One] — four and a half times.” Watch the video around the six-minute mark, though, and you’ll see Spencer repeatedly stumble over his words in trying to explain just what the heck all that extra power is good for. The man responsible for so clearly articulating Xbox’s new vision of being all about games and connectivity with Windows 10 since taking the Xbox reins in 2014 is all over the place in this interview. Every time he gets a sentence or two into trying to explaining who Microsoft does and does not want to buy a specific piece of hardware he stops and starts again in a new direction. Spencer is so all over the place on this that he’s echoing the mixed messaging that came out of Microsoft under his much-maligned predecessor, Don Mattrick, during the Xbox One’s original unveiling with its confusing DRM policies and focus on TV streaming.

Should I get in on the box?

Look, it was no doubt a long week for Spencer. I’ve personally read at least a dozen interviews he did on this topic, and I’m sure he did at least a dozen more that I haven’t read. When you have to talk that much and you’re constantly being shuttled from press conference to interview to partner meeting and likely getting little sleep while tending to all the rigors of E3, all that running around and promoting of your products is going to take its toll on any human being. That being said, when you’re being paid to lead the way for one of the two most important pieces of hardware in the games business, you need to be more on top of your game than this.

Microsoft no doubt spends an astounding amount of time in meetings and on calls and through emails discussing the precise minutiae of how it wants to present itself. Spencer probably went through countless mock interviews with his public relations team. He had talking points — yes, those things those of us in the media usually complain about because they make every answer in every interview sound exactly the same, keeping the subject “on message” and preventing him or her from revealing info that isn’t currently or never will be on the established PR roadmap. But if you’re going to announce to new consoles less than three years after releasing your last box and tell us one of the new ones is the most powerful thing since ever, you better be prepared to tell us who should buy the thing and why. 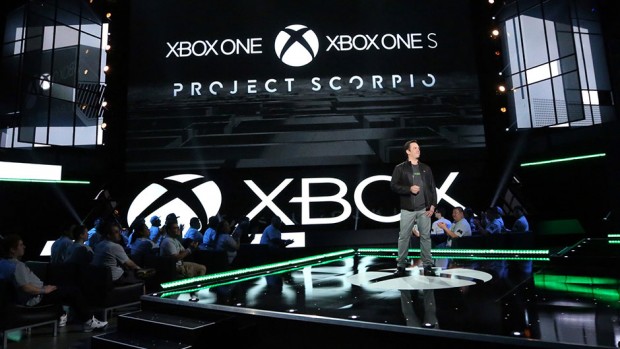 I’m going to buy a Scorpio. That much is already settled. But I’m a crazy person: under my TV is a PS4, an Xbox One and a Wii U. Somewhere in my house is a Nintendo 3DS. And I’m typing this right now on a PC that’s probably capable of playing everything shown at E3 2016 at max or near max specs. That’s not normal. Normal people need concrete reasons to invest in a new games console, especially if it’s going to (presumably) be the most expensive one on the market. People with 4K TVs have that, but no one else does, and because of Spencer’s mixed messaging, it’s not even clear whether or not they should.

You now have to wonder if Microsoft is regretting announcing Scorpio so soon, especially since rival Sony only made mention of its upcoming PS4 Neo in passing before E3, electing to not talk about it at all during the week of the show. As a gamer and someone who reports on the games industry, I love hearing any and all info about new consoles as soon as I can. My needs aside, though, was this announcement really good for Microsoft? With roughly 17 months ahead of itself before it launches Scorpio, perhaps Microsoft would have been better served by spending more time thinking about who it wants to sell this thing to before telling everyone all about it. Maybe a year for now it will have more and better answers.

For now, all I have are more questions. And I don’t think I’m alone in that. 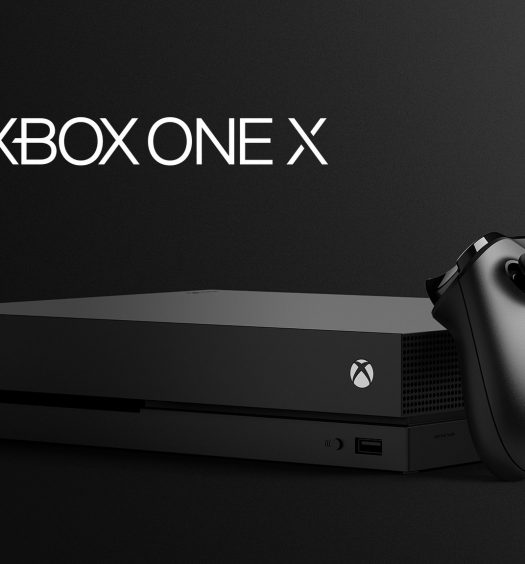