As season five of Fortnite Battle Royale draws closer and closer to its end, we are once again met with more weekly challenges. Week six presents itself with more of the same. This week, however, will give you the opportunity to put those stone heads to use; it also will give you the opportunity to put your running, jumping and building skills to the test with some rather interesting time trials. Eliminating opponents at a specific location makes its return, along with the ever constant chest looting challenge. Let’s take a look at all the challenges presented in week six. 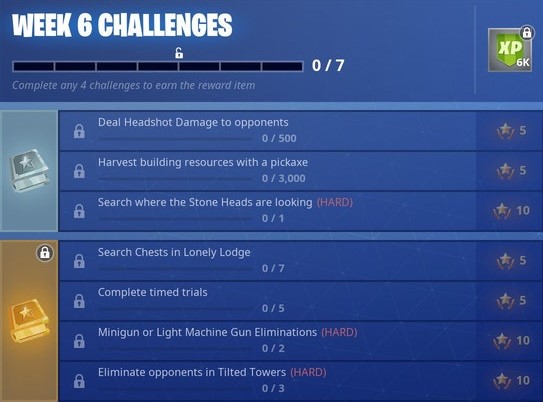 Not really much of a challenge, nor is a guide really needed. Simply aim for your opponents’ heads. This challenge is easily completed by shooting enemies standing still in that ball-shaped melon on the top of their head, or by downing them and shooting them in the head while they’re crawling on the ground. Using a weapon with a scope can make this easier, as enemies won’t expect a shot ringing in from a distance.

Harvest building resources with a pickaxe

Another challenge that really needs no explanation. Unless you’re trying to play Fortnite like PlayerUnknown’s Battlegrounds, you most likely harvest materials each and every game. This will take a few matches to complete, but simply harvesting anything made of wood, stone, or metal will give you progress towards this challenge. The only structures that do not grant materials upon destruction are player-built structures.

Search where the Stone Heads are looking

The only aspect that makes this challenge difficult is knowing where every stone head is located, and in what direction each one is looking in. Thankfully these statues have been present since the start of season five, so players should have had plenty of time to pinpoint exactly where they all are looking. In case you haven’t been paying close attention, or if you’re stumped as to where it all points to, here is a map to help. You want to look on the hill a little to the southwest of Salty Springs. Lonely Lodge, the place that really only gets any attention the moment there is a challenge active. Any other ordinary day, this place is considerably empty. The location does offer 12 different chests for the taking, though with everyone landing here, these are sure to go fast. Landing on the tower may seem like the best bet, but considering its height, a lot of players tend to go here. Landing on the western cliff next to tents should normally net a chest, and considering there’s another right underneath a cave, it can lead to the potential of collecting two in one trip. Here is the outline of chests for Lonely Lodge. 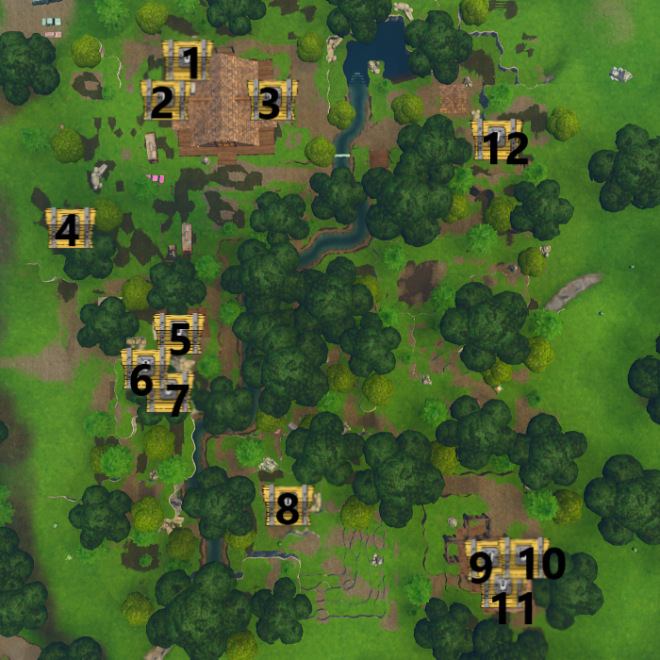 The time trials offered as part of this week’s challenges will have you feeling relative to old-time trials from classic games. Personally, most feel like something straight from a game like Crackdown given the 3rd person perspective and the amount of verticality required to reach the checkpoints. These challenges are simply starting from a blue stopwatch, holding X to activate the challenge, and then running from checkpoint to checkpoint. The time trial closest to Tomato Town requires an ATK to complete successfully. The trials near Shifty Shafts and Junk Junction both require the player to build up to the various checkpoints. Be sure to bring plenty of materials, and potentially a vehicle if you can find one. Also be aware it may take multiple attempts to successfully complete a timed trial. Here is a map to pinpoint you to every trials location. There are seven total, and only five need to be completed. Good luck! After the nerf the minigun received for headshot damage yesterday, the weapon still appears functional, but only if you’re fighting an opponent with no shields. Really, neither of these weapons work great against shielded opponents. Sure they have a fast fire rate, but they have too much spread at medium to long ranges, and their damage numbers aren’t really of shock value. The best course of action to take when completing a challenge such as this is to down the opponent with another weapon and finish them with the LMG or minigun. If you’re playing 50v50 (or Soaring 50’s as its currently called), it can be easier to down an opponent with either weapon as people tend to stand still more in this mode. Here are the two weapons you want to be on the lookout for. 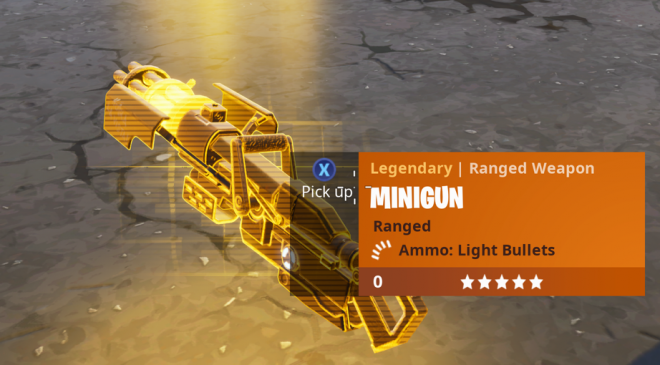 Here we are. Tilted Towers. The bane of most Fortnite players existence. With the challenge this week, you can expect a heavier amount of enemies dropping than normal. Tilted Towers is the one place its better recommended to not go for floor loot but to consult the nearest chest for a viable weapon to eliminate opponents with. Thankfully there are plenty of chests to go around. Chests are everywhere. Most buildings have 3 or 4 in them, and there are even some pretty interestingly hid ones where you wouldn’t think to look. Simply eliminate three enemies while staying within the boundaries of Tilted Towers. Here is a map of the various chest locations and where to find them. This week’s hidden battle star is beyond easy to find. The location of the star is in the same location as what’s being presented in the image. Upon finishing all the week six challenges, players will be presented with the following loading screen. 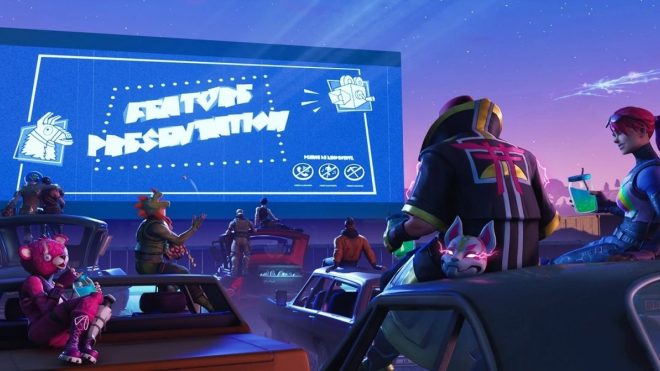 The battle star can be very hard to see considering how transparent it is. If you divert your attention to the red truck up front, with the shield potions in the hatch, you’ll see the vague image of a battle star. You’ll want to head over to Risky Reels to collect the star. It can be found on the back of the red truck that’s found in the first row closest to the screen.

We are one week away from the reveal of the secret character unlocked by completing seven weeks of challenges. Need help finishing previous week’s challenges? Check out our other guides below! 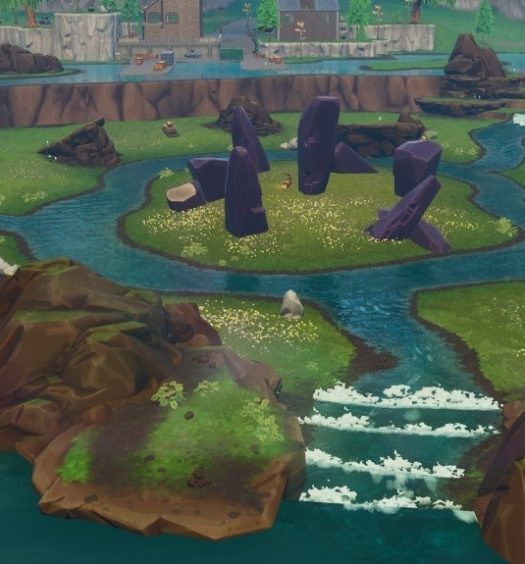