Here we are with the 2nd week of the 5th season of Fortnite. After the considerably easy but time-consuming challenges that the 1st week had to offer, it’ll be interesting to see just how much the difficulty of these challenges increases as time goes along. As previously stated, the challenges in season five work differently than previous seasons before. Players who do not have the battle pass are still given 3 total challenges to complete for the week. Battle Pass holders get the seven total they are accustomed to getting. Free players will only be able to earn 5,000 experience award for completing four challenges if they purchase the battle pass. Let’s take at what we have in store for week 2. 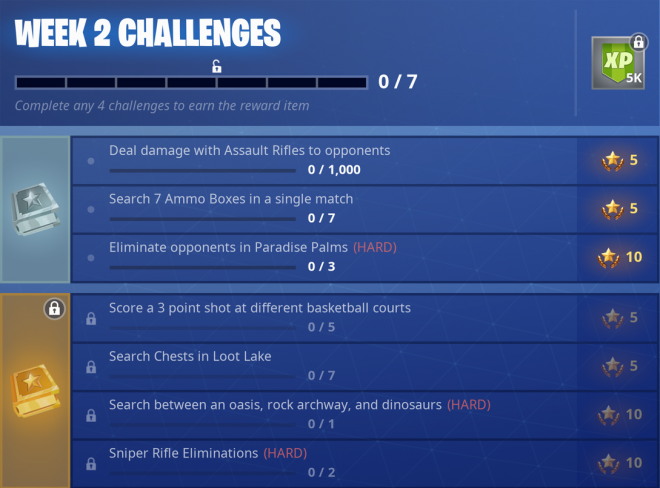 This is possibly the easiest weapon challenge you’ll ever receive aside from shotgun damage or shotgun kills. Assault rifles are the most balanced weapons in the game. Granted each weapon fires differently, but they are the go-to gun for new players. This challenge tasks you only with dealing damage to opponents, so if you don’t get the kill, it won’t matter. The important thing to remember with assault rifles is that up close they may be accurate and deadly, but from further distances, you’ll want to crouch, wait for your reticle to shrink in, and fire in short taps. Here are the weapons you want to be looking out for to complete this challenge.

There’s not any kind of map for this challenge. Ammo boxes are everywhere in the game. On the floor, on tables, counters, under stairs, you name it. Getting 7 ammo boxes is easier in bigger cities such as paradise palms or tilted towers, but there are also a lot more enemies in these locations. Searching in areas that you know other players have already been is a great idea, as many players don’t bother to open ammo boxes. To make this challenge even easier, playing a match of 50v50 can get this quickly for you. There are times that you can land at a location by yourself, and chances are the several buildings in that one location will have more than enough ammo boxes to complete the challenge.

Welcome to one of the several new locations of season five. Paradise Palms is a new location that covers territory that the prison and moisty mire you to inhabit. Grabbing weapons straight off the floor is definitely an option here, but there are so many buildings that grabbing loot from a chest is also a considerable idea. Using the buildings as cover or even to hold your position is warranted here. Many people land here and you wouldn’t want to get caught out in the open. Here is a map of all the chests paradise palms has to offer. 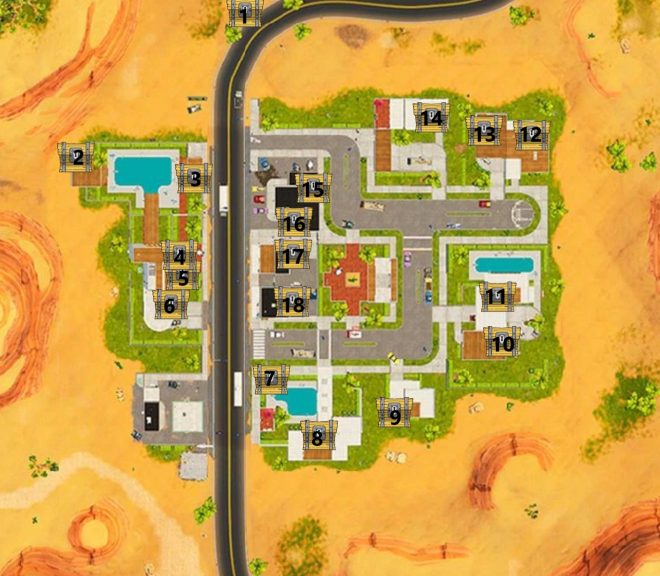 For this challenge, you will have needed to have unlocked the basketball toy from the battle pass. This toy unlocks at level 11. The toy works similar to an emote. When used, your character will toss a basketball. Around the map are various basketball courts. Originally, this challenge only asked players to make a basket at different courts but was recently changed to 3 point shots. For those who don’t know much about basketball, here’s a picture to help. You’ll need to stand on the outside of the line marked by the arrows. 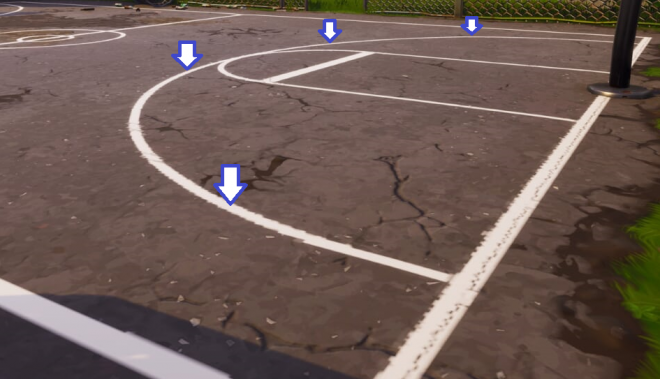 Any shot from the outside of this line will be considered a 3-point shot. For the challenge, you need to make a 3-point shot at five different courts. There are a total of ten courts available. Here is a map of every basketball courts location. Let’s be completely honest here. It’s a great thing that this was the location to loot chests in week 2. Loot lake is the considered the worst place on the map. A few islands surrounded by waist-high water with no real way to get around other than building. Landing here outright makes moving around from place to place very difficult. Also, the lack of chests makes it worse. Here is a chart of all the chests in loot lake that will count towards the challenge. 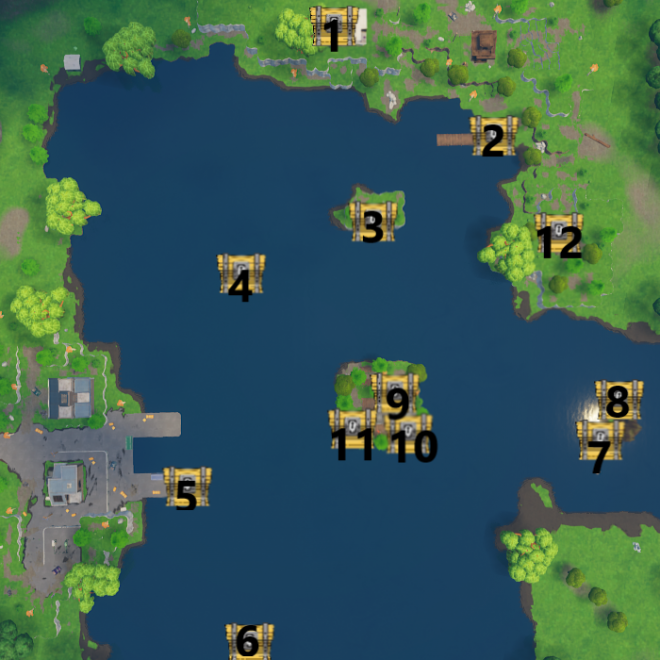 Search between an oasis, rock archway, and dinosaurs

If the term oasis in the description didn’t give it away already, you’re looking for a place in the desert. The oasis you’re looking for is directly above of the gas station at the very south of the desert. The rock archway is to the northeast of the oasis, and the dinosaurs are to the south-east of the rock archway near a tiny version of junk junction. 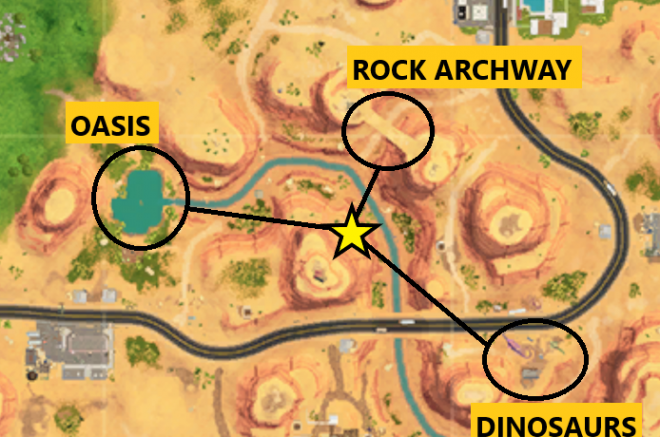 To better advise where to find the star, first look for the mountain that has an RV at the very top. Come down from paradise palms and climb on top of the rock archway. Directly ahead of you, you’ll see two cactuses on opposite ends of each other, with a rock in between them and an empty space. The star is in the space between the rock and the cactus. Here is a visual to assist.

Here it is! What can be considered the hardest challenge in week 2! Getting a kill with a sniper the correct way can be difficult. Having to compensate for bullet drop and every little move your opponent might make can make it hard to land a shot. Thankfully the challenge is made easier by the fact that you can down in an opponent in duos, squads, or 50v50 and then finish them off with a sniper rifle. There are a few different choices in snipers. The hunting rifle doesn’t have a scope but zooms in your view when you aim down sights. The bolt action sniper rifle is considered one of the best in the game. A headshot will down most opponents, though if you miss you’ll need to wait to load the next bullet in the chamber. The semi-auto sniper rifle has less damage output for both body and head, but can be fired multiple times. Really, it all depends on preference. Would you rather put your enemy down quick, or would you rather make them your pincushion? Here are the weapons you want to look out for. 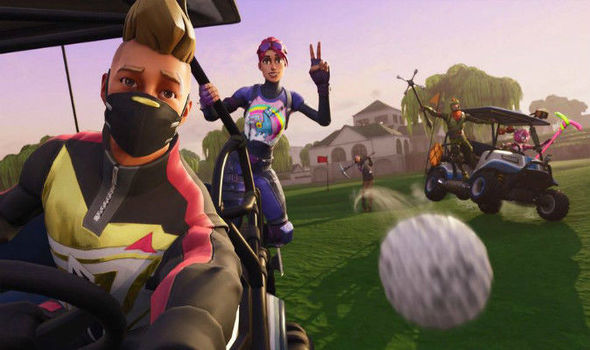 It may be very hard to see. But the battle pass star is on the very pointy top of Lazy Links in the background. You are seeing the main building. Land here once you finish all your challenges and this battle star will be yours. Here’s a marker for it on the map, just in case it’s needed. 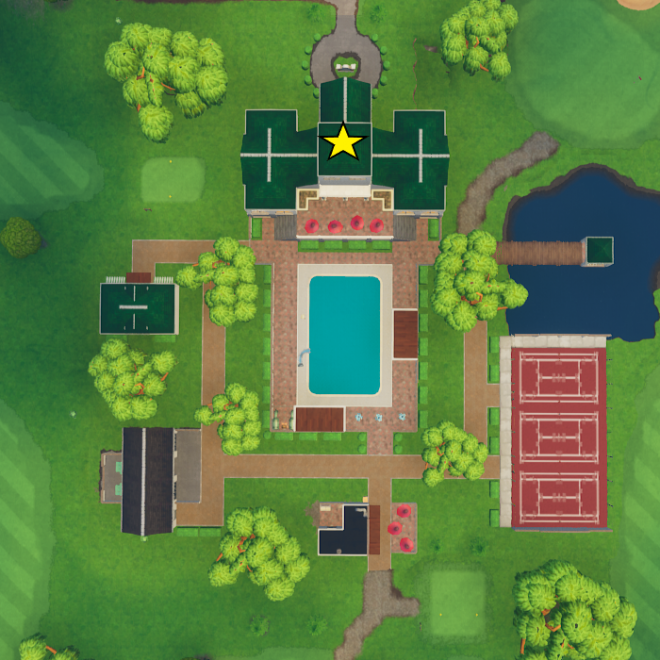 We will have guides up for every week of challenges. Make sure to check back each week! 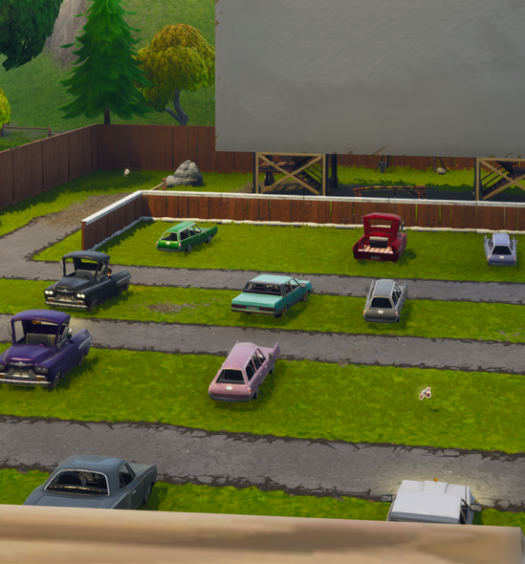