Our demo was cut into thirds, with a tutorial and gameplay rundown to start, an explanation of the deeper features of the game following that, and lastly a match played to completion on the game’s desert themed level. 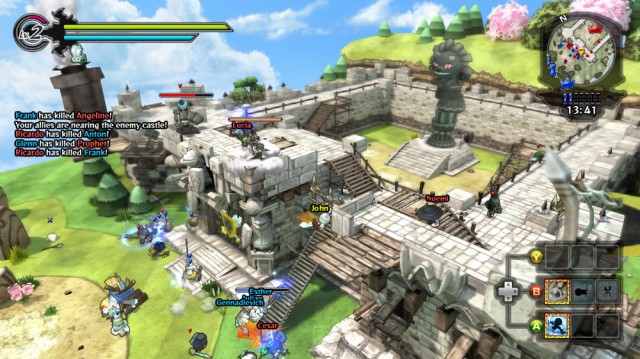 The tutorial took place in a snowy level that was setup more or less in a straight line from castle to castle with plenty of room to maneuver around the tower areas. You start each match out by picking a class (we played a warrior) and are randomly assigned three skills from your class’s set of 27. As you level up to a max of 5, you acquire a full set of 9 abilities; three each for the A, B and Y buttons. In each match players destroy enemy towers and build their own on the way to the enemy’s castle to destroy the “Big Tower” and win the game.

Happy Wars is far deeper than its premise. Each class performs a different role with warriors being melee attackers and defenders (with their block ability), mages being ranged offense with massive area-of-effect spells, and clerics being able to heal, buff, revive, summon walls, and even go so far as to build ballistas, canons, battering rams etc. on the field. Since you get a different set of 9 skills every match, not only is no match the same but also you have to play to the strengths of the abilities you are assigned. Every ability we saw was quite powerful (there’s no “upgraded version” abilities), especially the team skills (the Y button abilities) which call for team mates to line up in specific formations to perform powerful attacks, buffs and otherwise tide-turning events. 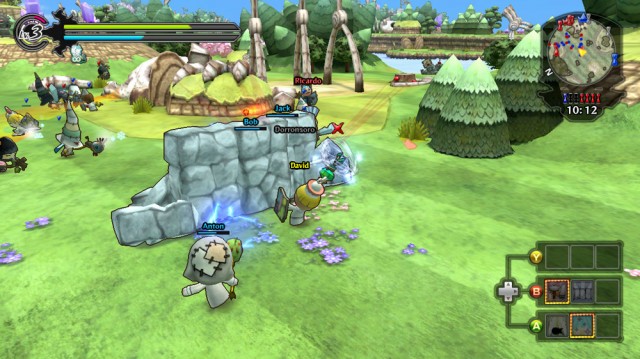 Finally, I got to play a full match against AIs with a full team of AI allies. I played the warrior again, but this time on the desert level. The developers told me this is one of the largest levels in the game and is meant for higher level play. The game started with a massive stampede towards the middle onto a large, circular area connected to by four narrow bridges. We fought around a pillar atop which was the tower. I used this awesome aim-able rocket jump to hop around the battlefield picking off mages and clerics, sometimes dying when I got too far behind enemy lines and the AI ganged up on me.

After taking the tower, we fought our way across the narrow bridges. I used a cool warrior ability that knocked enemies off the bridge if they weren’t blocking, sending them to their doom. However, this only worked for so long. Soon, the enemy AI coordinated around the tower, holding us off and we were losing ground. As we had to fight to retake the bridge, I used my super-guard ability to hold off the enemy team and slowly advance up the bridge with the mages raining damage on our enemies from behind me.

As we re-approached the tower, the developers told me to use the quick commands (follow me, attack, defend, heal me), I was skeptical that they would have any affect. I was also wrong. Clerics backed me up as I attacked from behind, mages responded to my “attack” command to keep the pressure on and we took another tower! Unfortunately I took too long to figure this out so the time limit was reached, but we won because we took more towers. I then understood why they meant this level was for higher level player. 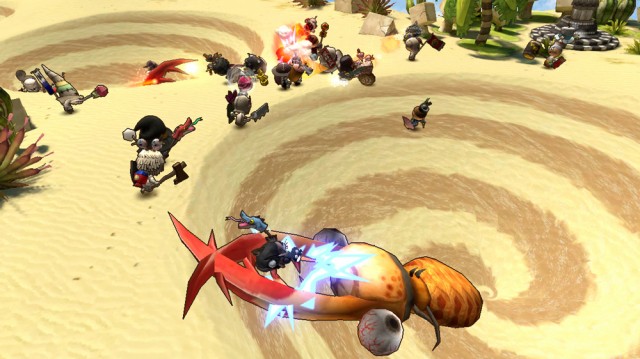 This level, along with every level, had a gimmick to it. Due to my inexperience I never took advantage of it but there are two antlions on each side of the map which can be fought around. Though they’re dangerous, taking advantage of that territory makes for an advantageous assault on the castle, or so the devs told us.

Here at XBLA Fans we are always cautious about multiplayer games, worried that they won’t last because of the community or a lack of content. Not only is Happy Wars full of persistence with its deep item and customization engines, but the bots are actually worth their salt. The AI is competent on its own and yet subservient to the player’s commands. They react quickly to team skills, and give feedback to commands they cannot follow. Using the command radial becomes less of a suggestion to other players and more of a command center for your AI companions, giving you a greater sense of control.

Happy Wars‘ item system is very core RPG styled. This is a piece of the game I was entirely unaware of prior to E3. As you play the game (be it in single player, coop or multiplayer mode), you collection Happy Coins. The more matches you play consecutively and the better you perform, the more coins with which you are rewarded. These coins can be used to buy item packs which come in a very wide variety, from cheap, class-based starter packs to rare packs all the way to the more silly packs. Each pack has a random selection of armor and weapons, all with different stats and cosmetics based on the type of pack you selected.

You can level each item to a max of 10. This is done by picking a host item and a secondary item as a catalyst, then combining the two. The host item stays and takes on a trait of the catalyst item to further customize that host item, along with improving its stats. Some combinations can improve weapons beyond just their stats. For instance, combining a weapon that’s physical with a magical weapon can give the physical weapon a magical bonus along with any attributes you add. This system thus creates massive depth in the RPG-esque customization element to go along with its massive variety of visual styles.

By variety of visual styles we don’t just mean from the basic to the cool. For instance, there is one helmet that fuses Grecian-style helmets with an awesome Samurai mask. There’s a weapon that’s literally a hotdog on a stick. Some faces are angry, some are goofy, there’s room for every form of seriousness and silliness in Happy Wars. 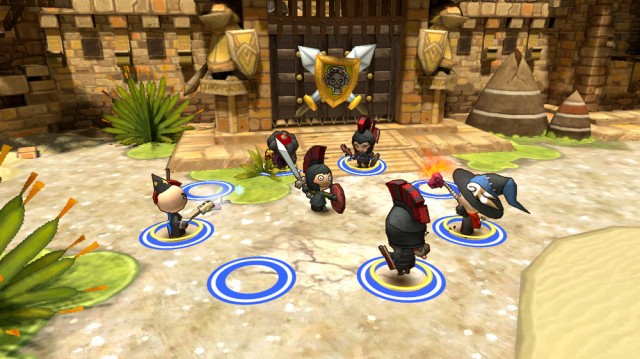 What we didn’t get to see

Of course we couldn’t play all the maps, but they were greatly varied in nature if the map select screen was any indicator. These maps varied from day to night, from huge to small and in all manner of themes. Each of the maps has different gameplay hooks as well. The desert level I played was very large and featured massive areas for battles, but the snow area was essentially a straight line with much more focused combat. Other levels are massive loops, or had treacherous holes or other hazards around them.

The different modes also play each map differently. The rule of thumb is that single player (which still includes a team of 14 AI allies) has rules to follow for each map and that in coop you fight against a different theme of enemy with different abilities and traits. Each level differs, so we don’t know them all, but we do know that you get unique items for beating single player missions and that coop rewards follow the multiplayer rules (more consecutive matches = more money).

Two features govern how players are sorted when they enter matchmaking: rank and map preference. While you can’t select which map you want to play in directly, you can choose your favorites and the matchmaking will consider that when finding you a game. To increase your rank, you’ll need to support allies, killing enemies, or build/destroy towers to accumulate points that raise your rank. There are five leagues which divide players by rank (e.g. 1 – 6 are “Fledgling” rank) and only players in the same league will be matched against each other. Your rank also judges how powerful your equipment can be. The max rank is 50. 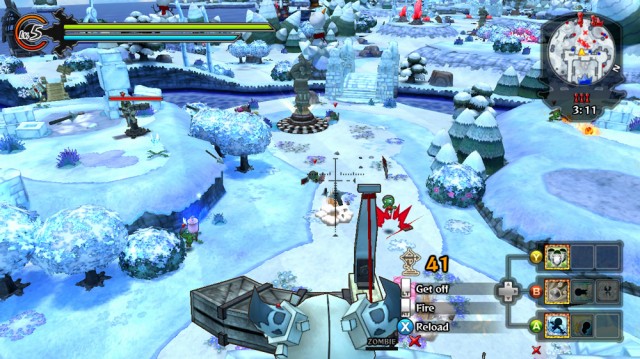 Happy Wars is simple fun on the surface. Take your favorite class into battle and coordinate with your team to achieve victory. Dive deeper with a massive tactical kit at your disposal. Furthermore the depth of the item customization, dynamic gameplay and amount of content will solidify your spot in the Happy Wars community as Toylogic supports the game post-launch.