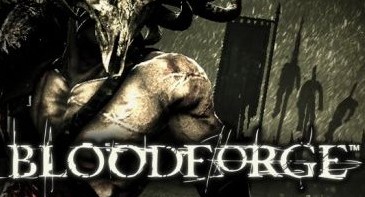 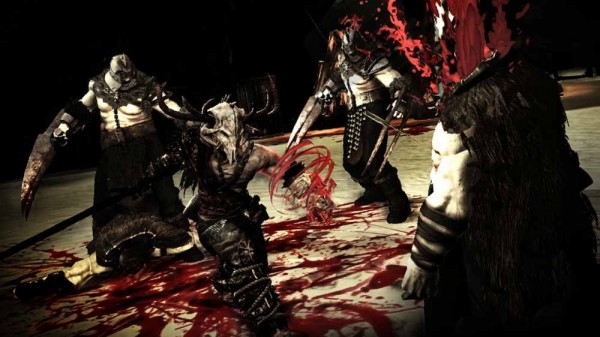 Bloodforge is a hack-and-slash where action is ultimately key. You’ll go through different environments and kill more and more enemies to build up rage. It’s fun for the first couple of hours but quickly becomes formulaic and filled with nonsensical shouting by the end. 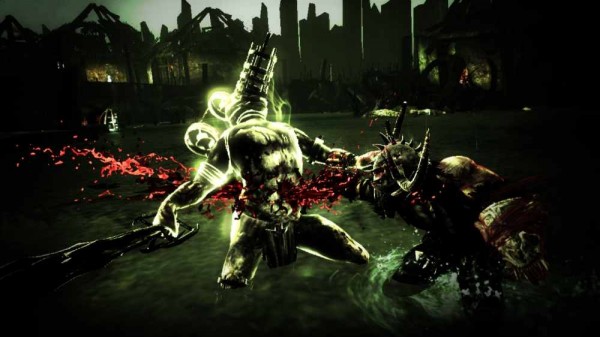 Combat system – The combat system in the game is actually quite good. You have a light and heavy attack which combine to make longer combos. You’ll also have a bow and arrow for long-range attacks. But the thing about the combo system is it’s pretty lenient when it comes chaining attacks together. You’ll have 10 hits on an enemy while someone comes up behind you and if you roll to evade (since there’s no block), your combo meter will still be going. It makes combat feel slower, which might bore people who like quick combos but it works and allows the combat to feel hefty.

Graphics and presentation – When you first see this game in action, you might need to be reminded it’s an XBLA game. Instead of the whimsy platformers or space-themed FPS’s, it feels like a retail game to a degree. Where games like Amy tried going for a retail survival-horror feel and failed, Bloodforge feels like a hack-and-slash you could pick off a shelf and play. With gritty graphics and cut-scenes that pay close attention to detail.

Variety in weapons – While there aren’t many weapons in Bloodforge, the three you can choose from do vary. Your normal sword will get most of the grunt work done but the hammer can yield devastating results although slower to use. But the claws are a favorite, since you get up close with these nasty blades on your hands and rip enemies to shreds. All the weapons do become upgradable over the course of the game with new moves and added abilities. 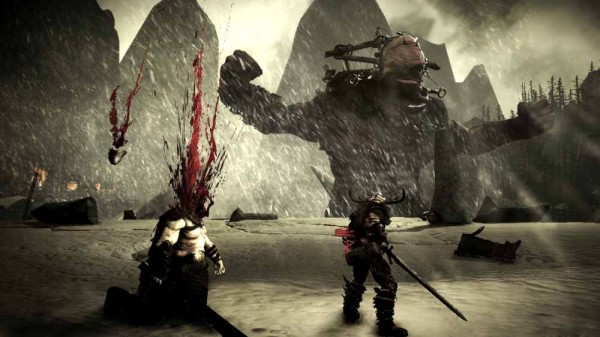 Story and pacing – The story of Bloodforge goes with the “vengeance is the best path” trope but ultimately feels like God of War Lite. Within the first level, you’re introduced to a helper character while Crom shouts about his problems. He meets a big monster who shouts back at him. A battle ensues, quick-time events, sound familiar? That continues for about five more levels after. It’s cool to see this style of gameplay carriy over to our digital shelf but it ends up feeling generic.

Lack of exploration – At first, playing through the game won’t make you explore much. The game hinges on you taking the correct path and while it may split sometimes, it ultimately leads to the same place and even if you backtrack, you’ll find you missed one item or a mana upgrade if you’re lucky. They aren’t necessary items rather one will either heal you or add more to your blood meter. Later on, more branching paths are introduced but again, they feel the same way leading to one path and having no alternate choices. Not to mention invisible walls which are never fun to come across. The game wants you to go down the linear path a lot of the time.

Camera control – During some of the most heated battles, you might find your camera all over the place. When constantly rolling to evade, the camera tries to lock in place where you are but sometimes has problems. In large groups of enemies, the camera might be behind a wall leaving you hacking and slashing something you can’t see. While it wasn’t a huge deal since we got out of most fights with the bad camera, it’s something we can see frustrating some people who prefer a smooth camera rather than a hectic one. For the second title in the Arcade Next, Bloodforge is good but a bit of a letdown. The hacking and slashing bits of the game are great but bogged down by a generic story filled with shouting and Celtic (although feels like made-up) gods. The look of the game is quite fantastic and something you don’t see everyday on XBLA. But there’s not too much to see due to the linear nature of the game and lack of environments. At 1200 MSP, it’s kind of hard to recommend this to everyone but if you really like the combat engine from the trial, you’ll probably get some enjoyment out of it. If you’re someone who likes a good story for your actions, you won’t find it here. Bloodforge sheds a lot of blood but that doesn’t mean you should give up yours for it.