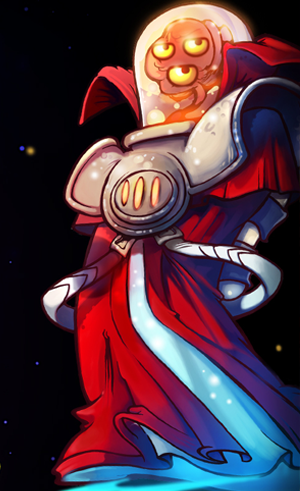 [springboard type=”youtube” id=”P_VdG6XSXQM” player=”xbla001″ width=”640″ height=”360″ ] Special 1: Heal bot – Voltar’s heal bot is many things, but first and foremost it’s a useful. This ability places a bot which heals all friendly units in the aura range. After a set amount of time or if the heal bot is destroyed, it disappears. The heal bot can be healed by Voltar or anyone else with healing powers. The bot is great, obviously, for healing while defending a turret but it can also be used to tank tower damage so your allies can attack from behind it. It’s for this reason that Voltar’s heal bot is a far more awesome ability than it sounds. On top of that, Voltar’s healing wave doesn’t heal himself, so the heal bot is a good way to accomplish that.

Special 2: Drone Gate – The drones that surround Voltar are even more versatile than his heal bot. Each drone, of which there can be 2 – 4 depending on upgrades, has its own bit of health and will seek out high value targets surrounding Voltar. His drones can put out ridiculously high amounts of damage on single targets, making assassination attempts far more dangerous for the enemy than for Voltar. The drones can also be specialized for tanking, stopping all incoming bullets and other forms of pain for quite a bit of time before they start to dwindle away. Suffice to say, Voltar’s drones can turn him into pretty much whatever he wants.

Voltar is a pretty interesting character with tons of different ways to play him. Luckily, what we feel is the best way to build is synonymous with how he’s played when you first acquire him. Of course with later upgrades you pick up the cheaper versions of some of the upgrades, so we take those, by since they’re the same as the earlier versions we’re going to combine this and our actual build together. 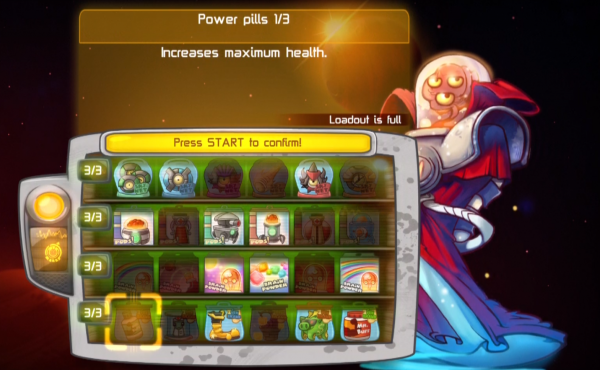 Voltar is all about support, no matter how he’s played, so Voltar always needs to pay attention to his team’s makeup. Of course, it’s not just the teams, sometimes people play their heroes one way or another way, so it’s important to communicate with them. However, we’re going to run with some typical compositions and strategies here when discussing how to build Voltar. Keep in mind no matter what you do, nine times out of ten you should take your solar gain on the healing wave first to help boost level progression. Take piggy bank or solar tree next, depending on what you brought.

If your team has a lot of sustain…

If your team is perfectly capable of taking care of itself, but needs help pushing and dealing damage, it’s your job to be a pusher. Here you’ll take your heal bot and quickly get its damage upgrade. This will help with your pushes as well as make you more difficult to kill should someone attack you in your healing field. Getting the heal bot to maximum longevity and cooldown reduction will allow you to have it up at all times (unless it gets destroyed), turning you into an absolute pushing machine. The damage output also helps.

As the game progresses into late game, take your damage boost and amount of drone upgrades for your drone gate so you can help with dealing damage. At this point in the game towers should start falling to massive Voltar-supported waves of droids you help create. Also, pool your resources as a team to keep super droids alive, they do impressive damage and get harder and harder to fight as they stay alive since they do such painful damage in such a wide area.

If your team has low overall health…

If you’ve got a team of low health characters all running in and out of combat, dealing damage, hit and run, assassinations etc. then you’ll need to be able to accommodate them. If you want, you can just push on your own (see above) but that may not end well if your other team mates are under-leveled because they’ve been dying. Should you choose to chase your buddies and keep them alive, you’ll be taking your drones with shield upgrades so you can stay alive, boots to chase (and escape), and your healing power bonus. If you need to, take the range as well, but Voltar is pretty fast on his… robes?

Building the healing bot will help late game, but max out your droids and healing power first. This build makes Voltar not only helpful to your team, but scary to the other. It allows you to run after your team mates, but render your enemies ineffective while they chew through the drone shields. The healing bot will be helpful in the later game since the distance covered becomes greater and so does the overall amount of damage being traded.

If you have to push on your own…

Sometimes your team is being crazy, and sometimes you’re not sure what their goals are or how their strategy is hanging together but they seem to be holding their own. In times like these (or… just because) it’s up to you to be your own unstoppable force. When your goal is just to get damage dealt to towers and pick up droids for money, it’s all about Voltar’s own sustain. Take your heal bots and drones early, then boots and health so you can survive out there.

As the game goes on and you start to really take towers with massive droid waves, get shields on your drones and increased range and heal on your healing wave. The goal here is not only to be able to escape, but to force the enemy to choose between you or the massive, full-health wave of droids you’ve amassed in front of their turrets. While effective, it’s important to remember that just because you can push well with this build doesn’t mean you can leave defense up to your team mates; since you can only be in one lane at a time, make sure you still are supporting other lanes when they need it.

Voltar can be either unstoppable or completely useless when his team is losing. There are two situations, either the enemy team is putting out way too much damage or your buddies can’t bring them down. If the enemy team is putting out too much damage but isn’t particularly healthy or tanky, build up your droids and put damage on your heal bot to make every push of theirs painful for them. Then your team mates should be able to survive long enough to finish them off, if you don’t do it yourself. If the other team is too tanky and your team mates can’t survive long enough to get through them, it’s time to start supporting players directly. Take a powerful heal wave and heal bot (maximize healing potential) and just keep them alive as they peel enemies off your turrets.

Voltar’s drones, healbot and even his healing wave can be turned into powerful damaging forces. This build, while expensive, can be incredibly painful. Take max health and regeneration for your general abilities, then focus on your drones. Get them to full damage (with both damage upgrades and increased drone count) and then you’re free to run around the map ganking people by chasing them. Use Voltar’s floating jump ability to stay uncomfortable ranges above characters (especially Leon) to force them to jump at you to maximize damage. Late in the game take the damage heal wave and your enemies will crumble before you!

This build is similar to the above build, but you take maximum healing on everything rather than damage. This allows your healing wave to amass incredibly large droid waves and keep your super droids alive. Use your healing bot to tank towers (and players) and get knockback on the healing wave to keep enemies at a distance while you facilitate safe droid passage. Lastly, the drones on this build are for protection, so get the cooldown and shield upgrades so they’ve got your back at all times.