Games that have featured war as a key component have proliferated both retail and digital game shelves practically since the beginning of gaming, but never before has a game focused on the lives of refugees instead of the lives of soldiers. This War of Mine: The Little Ones is a survival-based exploration game that puts you in control of a group of war refugees trying to navigate the waters of war while barely knowing how to swim. The game is inspired by the Siege of Sarajevo during the Bosnian War, and it’s clear from the beginning that 11 bit studios wanted the experience to feel as realistic as possible. Going into the game I felt this goal of realism was admirable. The question was, would it still be fun to play? 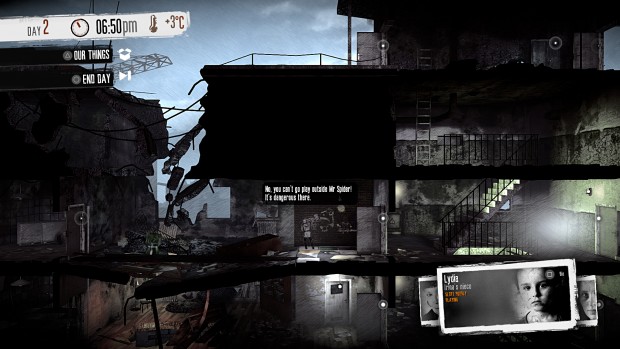 Near impossible decisions — From the very first day of life as a refugee every single decision that came my way put me between a rock and a hard place. Whether I was faced with deciding what was of utmost importance to bring back while scavenging; who had the pleasure of getting to eat or sleep; or just trying to figure out what tools I should be building back at home. For every door that one my choices seemed to open it felt as though two doors were closing behind me. Another source of decision making is bartering, which is very much alive and well while the war is happening. After bartering with someone I never truly felt as though I had come out ahead. Whatever plans I thought I had mapped out to survive the war frequently needed to be entirely rethought out every few days because something I hadn’t accounted for happened, be it a raid, an injury or even an inability to find the goods that were of utmost importance.

An excellent portrayal — This War of Mine: The Little Ones is one of the best portrayals of war that I have ever seen or played. It showcases the horrid nature of war but at the same time shows that humanity can and will prevail despite the terrible conditions surrounding the refugees. Characters battle with depression and lack of any noticeable comfort throughout the entirety of the game, and as the war drags on the toll it takes becomes apparent in both the characters’ actions and their biographies, which serve as journals. The writing is fairly simple, but I still managed to form bonds with each person in my group. These bonds were so strong that at times things would get too depressingly bleak, and I would have to take a break and walk away for a few minutes in order to feel ready to play again. Everything about the experience feels genuine, which helps lead to great empathy and connection with all of the game’s characters.

Plethora of play styles and characters — The way that a group of refugees survives the war is left completely up to the player. Players can choose to invest heavily in the bartering, attacking/defending, sustainability or scavenging methods of playing or some combination of them all. Each person has different attributes to make them all equally suited to survive the war, as well as different backstories to bring all sorts of perspectives to the story. This War of Mine: The Little Ones also sees, as the subtitle suggests, the addition of children as characters. This completely changes the way that players need to approach the game since there is another mouth to feed that can’t really pull any weight around the house. Seeing children go through the war also brings an entirely new perspective to the conditions that each person is going through.

Write your own story — There are 18 different characters who have already been prearranged into groups to go through the war with. However, there is also the ability to “Write My Own Story,” which allows players to pick which characters they would like to play as in a group, not to mention that one has the ability to create characters who are fairly diverse in terms of backgrounds and attributes. Players can also choose the duration of war and intensity, every aspect of winter and even what locations are on the map. This adds a ton of replayablity and the ability to tailor your own story together is fantastic. Load times and auto saves — The load times, while not unbearable, can take up to 30 seconds, which slows down an already slow-paced game. The game also only auto-saves after an entire day and night has passed, and with no ability to save at will this can be a real pain. Depending on what I needed to accomplish during any given day and night it could take upwards of 20 minutes between saves.

An accurate portrayal of war doesn’t make the best game — As was mentioned earlier, the war portrayed in This War of Mine: The Little Ones is incredibly accurate, and while that serves the game well as a piece of art, it can make it fairly frustrating as a game. I would often go through cycles where I really needed various items to craft whatever it was I needed to survive, but by the time I would find them I’d already been raided multiple times and lost the items that I already had that were also necessary for this crafting. This vicious cycle happens fairly often and even though it does make the game a lot better from an artistic perspective, it also makes it a bit harder to enjoy playing. 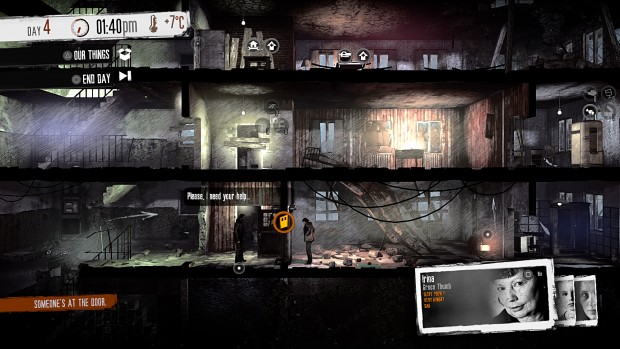 If you’re interested in gaining a new perspective on war or want to play a true emulation of war’s reality then look no further than This War of Mine: The Little Ones. Those that fear what the realities of war may bring will almost certainly face frustrations throughout the game, but despite that, everyone should at least give such a unique game a chance.

This War of Mine: The Little Ones was developed by 11 bit studios and published by Deep Silver. It will be released on January 29, 2016 for $29.99. A copy was provided by Deep Silver for review purposes.

Deep Silver 11 bit studios This War of Mine: The Little Ones 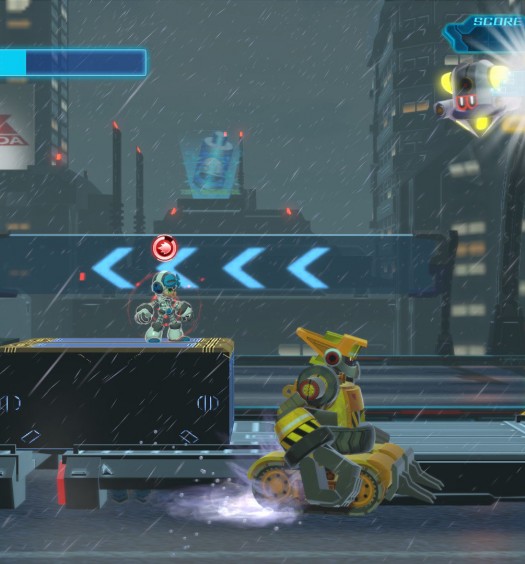