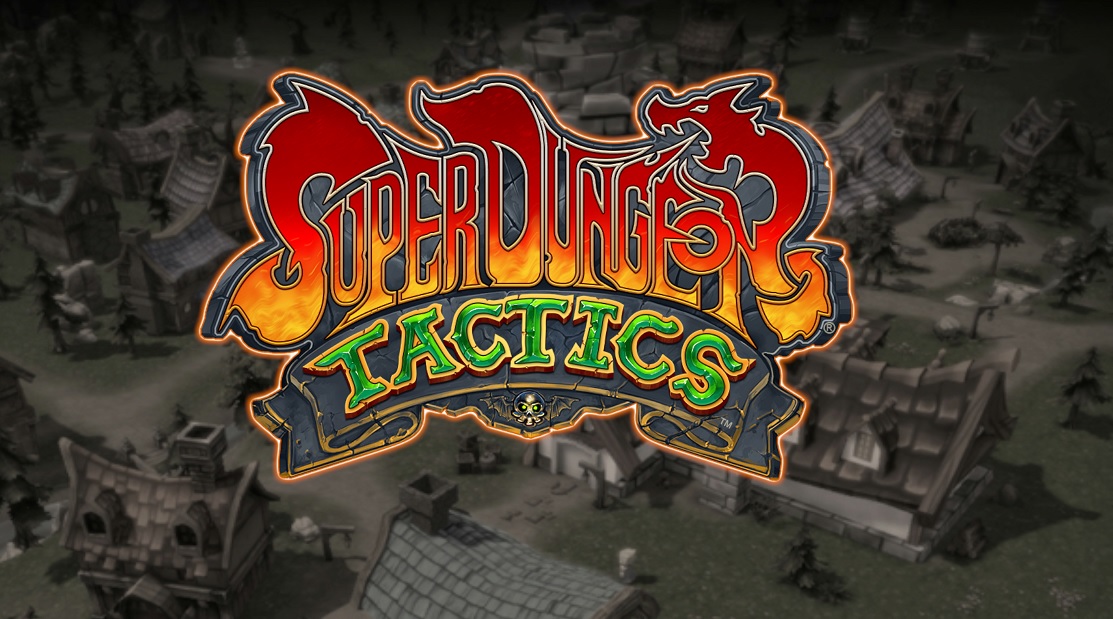 Super Dungeon Tactics Review: Will you get board?

Super Dungeon Tactics Review: Will you get board?

At first glance, you may think you’re looking at a bad game that you would normally download to a smart device. The title Super Dungeon Tactics is similar to those that are free-to-play but have advertisements and require you to buy gems to progress. In actuality, there is a real-life board game called Super Dungeon Explore. The goal was to create a digital version that still gave you the feeling of an actual board game. No miniature collecting needed! While somewhat simple, there is a definite uphill battle of learning all of the mechanics. There isn’t much of a tutorial, you’ll just have to figure it out as you go.

The Heroes — There’s a plethora of characters to use, gaining them as you finish quests. You can even rename them! They’re all different in personality and it’s always exciting to try out the new ones you’ve picked up. You can customize what weapons they have and choose which to bring into battle. This allows for strategies to evolve as you edit your party to fit the needs of the quest. Depending on the items you get from rewards, you may actually start having favorites or go-to heroes. A wide array of choices never seem to end. If you like strategy based on party building, you’ll fall in love quickly. 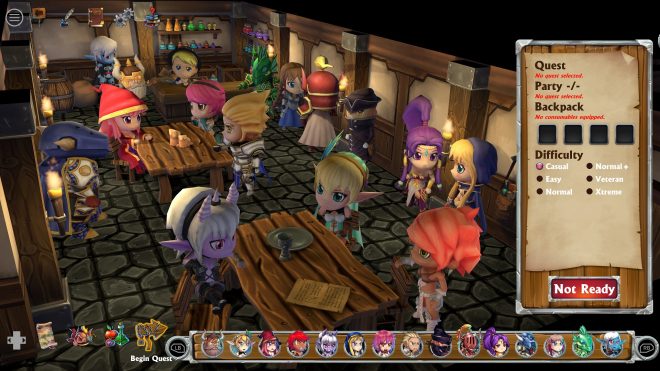 Items Galore — Win or lose, you’ll constantly be raking in the treasure. The reward system makes failed battles still seem worth the effort. It’s a treat to check the treasure chests and discover if you’ve obtained that next mystic weapon to destroy your foes with. Increasingly better gear keeps you replaying missions on harder difficulties to build up your inventory options. Being able to change the difficulty at any time allows you to find gear and then play the tough battles on casual to continue the story. There are loads of items and weapons to discover. This helps even rookie tactics players excel, yet gives a challenge to those who love struggle.

What’s the damage — There is no randomized roll for what damage you’re going to do (besides buffs). You are treated to seeing the impact your attacks will do, and having this knowledge gives you comfort in your decision-making. Since the time is stopped while you choose, you can play around with who to attack with and what enemy you’re going after. This helps lighten frustration that typically arises with chance-based attacking. Just make sure you’re absolutely doing the math right, because you could waste a turn if you, for example, hit an enemy who has armor (armor regenerates each turn) and does no actual health damage. Simple math is still math! 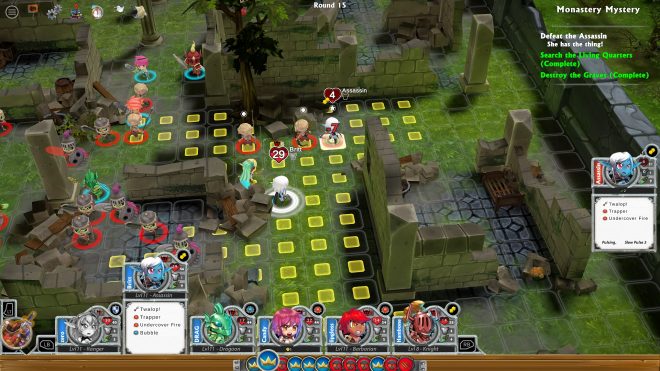 The Dice — The excitement of dice rolling has been around for a very long time. Not just for gamers, but for gamblers as well. A simple toss of an object, even a coin, has determined many outcomes both positive and negative. From winning or losing money, to the extremes such as death. People are willing to risk it all with a false sense of hope. Russian Roulette anyone? The excitement in Super Dungeon Tactics dice rolling does not seem to exist. Another turn, this again? However, it does add depth that some will admire. The buffs can be helpful but it can be tedious when there are a lot of turns. Frustration can also ensue if forced to take the skull dice, which can have huge negative impacts on your quest. This version of the game doesn’t have an auto-assign, which would have been a great feature to help blow through quests faster. 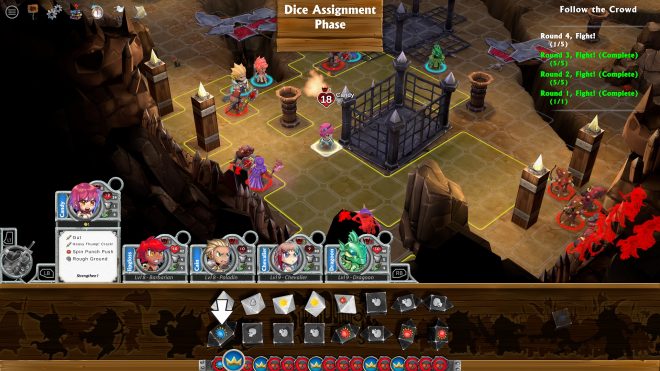 Preparation — Before each quest, you prepare by selecting items to bring with you. You always start on the backpack, which makes no sense. Why would you ever take a pack that has fewer item slots than your highest? It creates an extra step that doesn’t belong. Picking a set of items for every mission would be great, and allows one less step before battle. There are clearly better items than others so scrolling through the mediocre ones becomes a chore. Selecting the members of your party and getting everything ready for your next confrontation is clumsy. There are too many buttons to remember and you’ll constantly hit the wrong ones. Forgetting to pack items in long quests will force you to quit out when you go to heal with a potion and find nothing there. I feel setting up is a letdown and something that pushes the game back a step instead of forward.

No Merchant — Loot cannot be sold nor bought. As you amass a horde of treasure, it simply builds up and soon you have too many options. Even a trash system would have been acceptable. While lots of rewards can be awesome, you start to have junk piling so high you might be on the next episode of Hoarders. A filter could have helped, so you could filter specific levels of weapons. Too much of a good thing can be a bad thing. 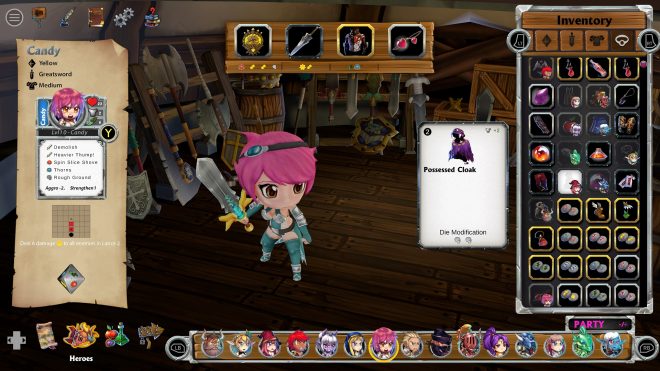 Fans of turn-based RPG can rejoice with a well-made title to add to their arsenal of tactical warfare. There are tons of cute and interesting characters to customize and build stronger. While this genre can be slow to play and learn, the interest level increases with progression. Replaying quests you’ve already completed to acquire more loot doesn’t feel draining. There is a ton of content and the price of the game is easily justified. I would like to stress that at times, this title can feel slow and may be one you won’t have enough time to sink into for enjoyment. If you’ve played the actual board game I would highly suggest giving this a shot. If you haven’t, I still think it’s worth a roll of the dice.

Super Dungeon Tactics was published and developed by Underbite Games on Xbox One. It was released on August 3, 2018 for $19.99. A copy was provided by the publisher for review purposes. 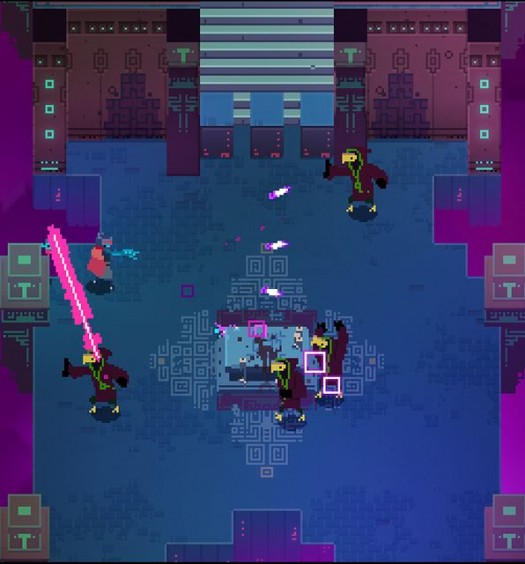 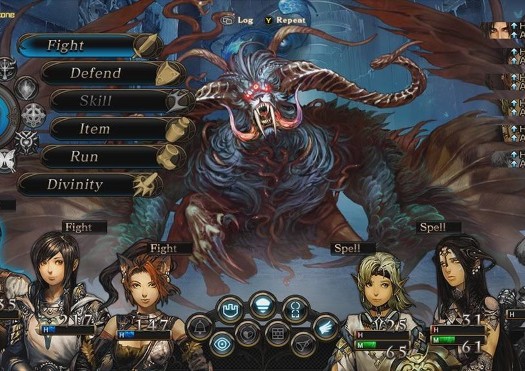