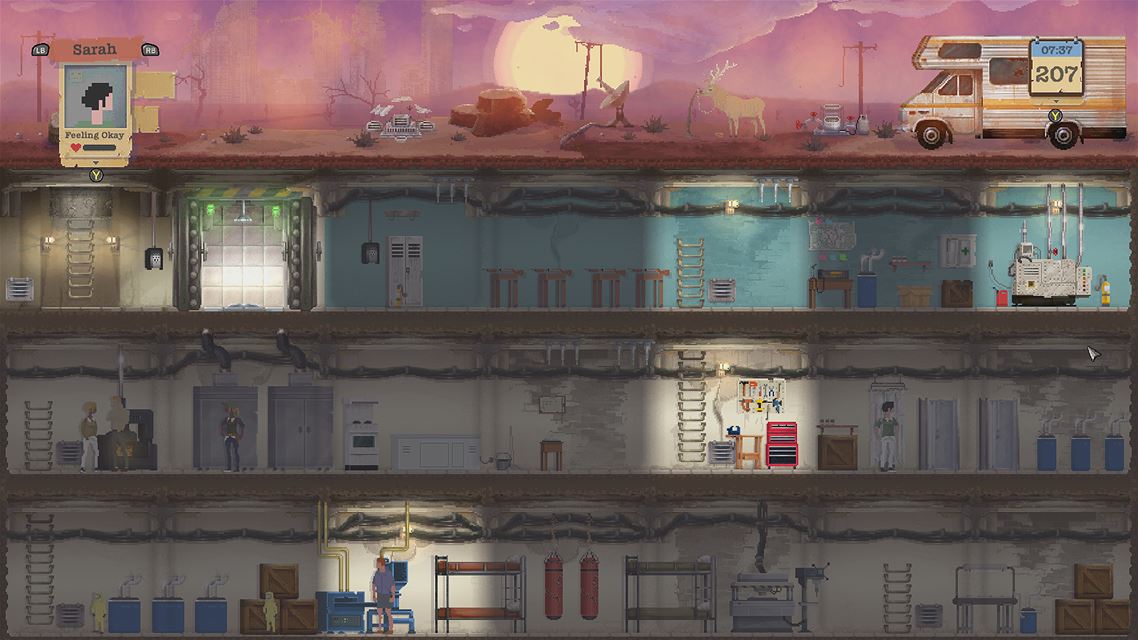 When I wrote my preview of Sheltered, I thought of it as something of a rough diamond. Here was a brutally unforgiving game with a clunky control system that translated poorly onto a gamepad and betrayed its PC roots, but still, it was a game that offered rich rewards to those who persevered. Now, almost six months later, Sheltered has been honed and polished into something both much more forgiving and a lot slicker, making it a more enjoyable game overall.

In many ways, Sheltered is like a lot of other survival sims, insomuch as its featuring of the standard requirement to meet the basic food, water and hygiene needs of in-game inhabitants. What makes Sheltered interesting, though, is that the player is able to customise every aspect of the family featured from the outset, and the game does its very best (not always successfully) to make you feel invested in their long-term well-being and self-sufficiency. 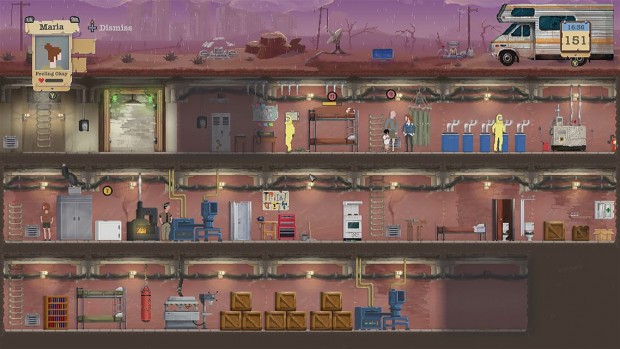 Going deep — One thing I particularly like about Sheltered, and perhaps the thing that kept me playing for as long as I have, is that it is undoubtedly one of the most comprehensive survival simulators available on Xbox One. As in most games of this type, gameplay revolves around balancing the basic survival needs of the utterly dependent characters whilst simultaneously improving their chances of long-term survival through iterative upgrades to their home, which in this case happens to be the titular shelter. Initially, survival is a struggle, and food and water are the main focus, but after a few hours the focus shifts to resources like wood, metal and electronic parts. By the end, you’ll be recycling old laptops into the raw materials required to press your own bullets.

Playing the long game — Should you succeed in surviving to that point, you’ll already have encountered the rather subtle and ingenious way by which Sheltered introduces new challenges. I don’t quite know how the game knows when it’s time to start doing so, but there is no doubt that as your family becomes more capable, well-armed and better organised, so too do the occupants of the wasteland outside the shelter. Later in the game, the threat from extortionists, home invaders, lone psychopaths and even named gangs becomes considerable, and it seems to happen at the exact moments when you begin to get just a bit too comfortable.

Personality traits — It’s quite unfortunate that Sheltered depicts its characters as faceless blobs of pixels, because aside from that, a great deal of effort has been invested toward injecting personality into each and every person in the game. The dialogue is utterly forgettable, but each character’s attributes, strengths and weaknesses become ever more important as the game goes on, and you’ll soon feel comfortable with each character’s looks and the role you want them to play in your post-apocalyptic family unit. Watching your favourite scavenger starving or dying from radiation poisoning never fails to invoke a desperate struggle for food or medicine. 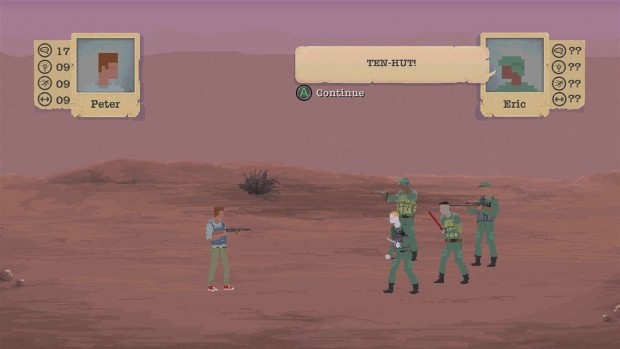 Lobster claws — Sheltered‘s interface has improved since it launched in the Games Preview Program: a few features that would have felt natural on a mouse but not with a controller — such as opening the shelter door — have been automated, but even so, the controls still feel inherently clunky on a gamepad. Luckily there are few occasions requiring great dexterity, but, along with a handful of other issues, it is possible to miss a radio call, or fail to arm a trap in time when the shelter is invaded.

Vegas stakes — Every game of Sheltered begins with a randomly generated map, and each location on that map features randomly generated loot. The game does seem to be pre-programmed to ensure that basic essentials such as food and petrol are readily available, which feels like a Godsend early on, but by the late game you’ll be swimming in the stuff, whilst something far more mundane like wooden planks or wool remains consistently elusive. The ability to broadcast a request for traders to visit your shelter is a good way to mitigate this, as is the inclusion of a broken RV, which can be repaired and used to travel much farther afield.

School’s out — Perhaps the most frustrating thing about Sheltered is the lack of either an introductory quest with predefined outcomes or a decent tutorial. Aside from perhaps the first 10 or so interactions, there isn’t so much as a tooltip anywhere in the world of Sheltered, which is a big issue considering the game’s relative depth and complexity. It saddens me to think of all the game’s excellent features that I may not have discovered, simply for the lack of knowing they exist. A case in point, I was discussing Sheltered with a colleague who kept making the same comment about how much micromanagement each character requires just to keep them alive — eating, sleeping, drinking, visiting the bathroom and so on. I asked why he didn’t just use the Automate button. His response: “You mean, I can automate all that stuff?” Yes, you can. With just a single click of the left stick when the character you want to automate is selected, all of the mundane stuff is taken care of. 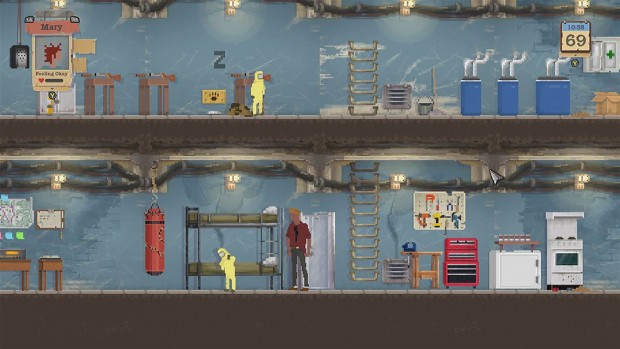 There is no doubt in my mind that Sheltered is now a very accomplished game, and easily my favourite survival simulator, but due to the control issues and general clunkiness, it certainly won’t appeal to everyone. Players who enjoy the likes of Don’t Starve will get along well here, and Sheltered will also appeal to fans of more traditional, dystopian visions of the future or to anyone who enjoys management simulators. By contrast, players who expect instant gratification from their games are likely to be frustrated, whilst many others will be put off by the combination of a steep learning curve and lack of useful tutorial or starting scenario.

Sheltered was developed for Xbox One by Unicube and published by Team 17 Digital. It was initially released on the Microsoft Preview Program, and was promoted to complete release costing $14.99 on March 15th. A copy was provided for review purposes. Click here for information on XBLA Fans’ new scoring system. 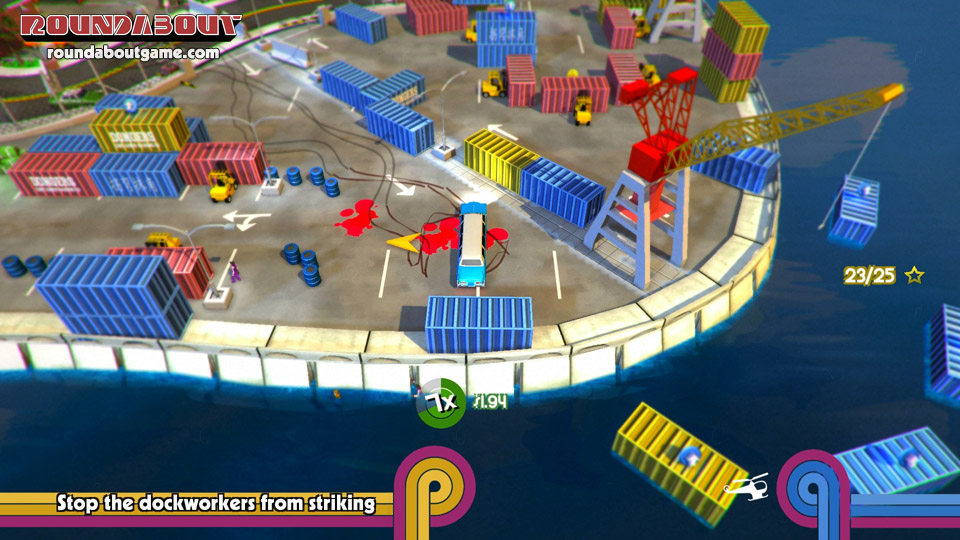