If you read XBLA Fans with any regularity — or even any irregularity, for that matter — then you’ve probably noticed something about us: we cover indie games. A lot. It’s kind of our thing. We’ve had to change our coverage area a bit over the years as Microsoft retired the old Xbox Live Arcade label and moved onto ID@Xbox, which, unlike XBLA, is just a program for developers instead of also being a specific section of games on the Xbox Store. While this move was more than a little inconvenient for good ol’ XBLA Fans’ branding, it made a lot of sense for developers and gamers.

The once mighty XBLA label — which helped games like Geometry Wars, Castle Crashers and Braid usher in the indie revolution that took the industry by storm in the last generation — had taken too many lumps to continue on to the Xbox One. Prominent indie developers behind games like Monday Night Combat, Fez, Super Meat Boy, Retro City Rampage and even Braid had publicly, and often repeatedly, blasted the XBLA platform and Microsoft’s treatment of indie studios. Further, the definition of just what exactly an indie game is continued becoming even more liquid. Is it any developer that doesn’t’ work with an external publisher? Is it every developer that isn’t owned by a publisher? The answer is murky, especially when you consider that some developers move in and out of those publisher relationships.

And then there was Sony. Still reeling from its downright ugly PlayStation 3 unveiling and floundering in second place, Sony eventually stepped up and promised a better console experience for indie developers. Many listened and jumped ship to Microsoft’s rival. This became increasingly apparent during the generational shift to Xbox One and PlayStation 4. Microsoft infamously spent its 2013 E3 press conference talking about motion controls, its complicated DRM strategy, the ability to watch TV on its new console and oh yeah, by the way, also some video games. Sony used its E3 conference to talk up PS4’s initially lower price point than Xbox One and lack of convoluted DRM. But what has long outlasted those former Sony advantages after Microsoft eliminated them by reversing some policies, is Sony’s focus on games and especially on indie games.

Headlined by the absurdly hyped No Man’s Sky and The Witness from none other than former Braid creator Jonathan Blow, the PS4’s indie game lineup has been seen by gamers as more impressive, its indie policies as more friendly by developers. The largely accepted narrative this generation has been that if you wanted a games console that was rich with creative games from independent studios, you wanted the PlayStation 4. Microsoft, of course, wasn’t going to take that lying down and did everything it could to highlight its ID@Xbox games and initiatives. Once a console generation’s story is written, however, it’s pretty much impossible to white it out and write a new one. It’s appropriate, then, that the same press conference when Microsoft announced it was moving “beyond generations” with the unveiling of its Xbox Scorpio, was the one in which Xbox took back the indie crown from Sony. We could argue endlessly about who put on the overall best E3 2016 press conference — for my money, Sony did — but one of the major console holders walked away with a smaller victory that really isn’t even debatable. Microsoft’s media briefing had a much better showing of indie games than Sony’s did.

Here are all of the indie games Microsoft chose to showcase during its E3 briefing:

And now, here is an exhaustive list of all the indie games Sony chose to highlight at its own briefing:

That’s not much of a competition at all, is it? It’s more like a mercy killing. To be fair, many of those ID@Xbox games appeared only in a quick sizzle reel (below) Microsoft ran, showing only seconds from each game, but showing a few seconds each for a dozen or so games beats the heck out of basically not showing anything at all. Plus, it’s not like none of the indie Xbox games got their own spotlight. We Happy Few and State of Decay 2 certainly did, and it’s the sequel to a game that most gamers thought was packed with at least as much fun as it was hidden penises. And while We Happy Few‘s demos have bored me, everyone else who’s played it seems to love it, so I’m probably the odd man out there.

Speaking of putting yourself out there, ID@Xbox Director Chris Charla was so enamored with Playdead’s Inside that he took the stage to profess his love for it: “I can honestly say Inside is a masterpiece. It is one of the best video games I’ve ever played, and I can’t wait for everyone to try it.” That’s quite a statement, but his claim isn’t too hard to believe when you consider that Playdead was also responsible for Limbo, which is one of the best XBLA games ever. And, oh by the way, Inside got a release date, and it’s next week. Playdead sent XBLA Fans review code last night, and I am dying to dig into it later today and to let you know next week whether or not it holds up to Charla’s praise.

Meanwhile, Below, a console exclusive for Xbox, is a game from another storied developer in Capy Games, and it’s one I’ve had the pleasure of playing several times over the last few years. Below feels like it’s going to be another hit for Capy and possibly its best game to date. Flinthook‘s convention demo is little more than a proof of concept, but it’s one hell of a fun concept. Cuphead was announced two E3s ago and, sadly, still doesn’t have a release date, but what I’ve played of it is as exhilarating as it is gorgeous, and it’s really gorgeous.

By comparison, PlayStation 4’s Farpoint VR‘s trailer looked so impressive that it almost could have been confused for footage from EA’s Mass Effect: Andromeda when it first started playing. But that was one indie game, the only one Sony showcased at E3. It’s true that Sony also had a respectable collection of indie games on the show floor, at its separate PlayStation Showcase event and during its media briefing pre-show that weren’t put on display on the big stage, but those are all ancillary to what we’re not talking about here: the media briefings that virtually everyone uses to decide who “won” and who “lost” each E3. Those of you keeping score from home don’t get to play the games on the show floor, and playable indie games there get far less coverage than, say God of War 4 or The Last Guardian, so if an indie game wasn’t on the big stage, you probably haven’t been able to read much or even anything at all about it. And let’s not forget that Microsoft also had a show floor and separate events full of its own lineup of indie games. 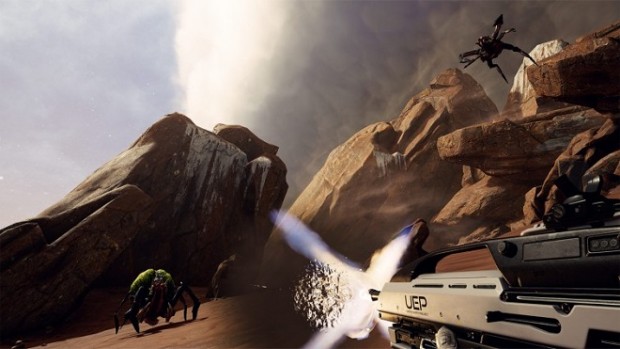 When you get down to it, Sony focused much more on games than it did on anything else at its E3 show, and it was indeed a wildly entertaining show. It was full of exciting AAA games like Horizon: Zero Dawn, Resident Evil VII and whatever in the Seven Bloody Hells it was that we watched Hideo Kojima show us from Death Stranding, a game apparently featuring lots of dead fish, floating deities and actor Norman Reedus maybe somehow giving birth via C-section. Neat…I guess.

Microsoft, of course, had Gears of War 4, Halo Wars 2 and more from the world of blockbuster games, and where Sony spent time showing off lots of PS VR stuff of varying quality, Microsoft gave plenty of show time to its (somewhat confusing) new console strategy. With that impossible-to-ignore cacophony of gaming spectacles going on, it’s easy to see why so many gamers and journalists overlooked the battle of the indies. But another reason why it was easy to miss is that Microsoft was really the only console holder that bothered showing up to the battlefield.