Beyond a familiar art style and a healthy dose of teenage angst, the premiere of Life is Strange 2 is setting up something entirely unlike its predecessor. It opens on something that’s a stark contrast to anything we’ve seen in this universe thus far: a normal life. Protagonist Sean Diaz has the usual teenage problems of trying to sneak out to parties and having to deal with his younger brother, Daniel. The two live with their father, and together they make a quirky, functional family unit. The extended, laid-back opening does a fantastic job of developing these characters through their everyday life. Despite only experiencing this normalcy for just under an hour, it hits incredibly hard when that peace is quite suddenly shattered. 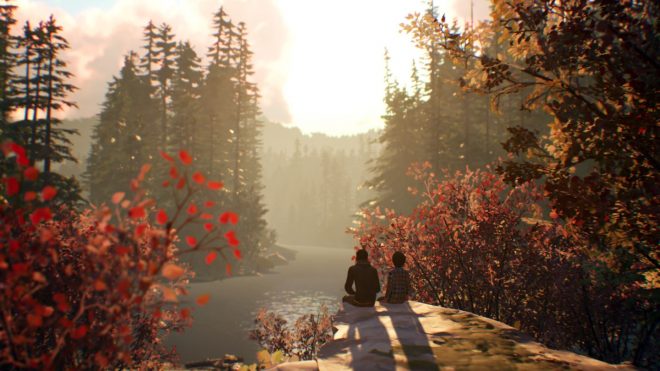 After a tragic accident is made worse due to one of the brothers suddenly developing superpowers, Sean makes a snap decision to keep them both safe by going on the lam. Heading south from Seattle with nothing but a hastily packed backpack and the hopes of reaching their father’s hometown in Mexico, the two are left to their own devices to survive. This core relationship is the heart of the game, with fantastic voice acting and writing making these two feel like genuine brothers; they butt heads, but no doubt care for each other. Sean’s faced with some tough choices in how to care for Daniel, not only because of their dire situation but also because of he’s still an impressionable child. He’s going to mimic or be affected by everything you do, even if it seems inconsequential at the moment. I’ve made it through this first episode without making a regrettable decision, but when you spend all your money instead of stealing it becomes increasingly obvious I won’t be able to sustain this good guy act over the long haul. While the gameplay lacks a defining feature like the original’s time travel, Daniel’s curious, wandering AI is a joy to watch and play with. Some environmental interactions can be augmented by including Daniel, which can result in everything from a simple teaching moment to cooperative puzzle-solving. While I felt there were a few too many times conversations went on without any player choices, the overall gameplay feels more dynamic thanks to being able to carry discussions while exploring the world and the little details that carry over from previous actions. The overarching story is shaping up to feel like a modern-day Huckleberry Finn, with the duo only relying on each other as they experience various slices of life in late 2016 America. The game doesn’t shy away from our current political climate, and how despite being raised in America their heritage makes this journey that much harder. Some interactions are harrowing, depressing and all too familiar, while others are incredibly warm in a dark place. This episode felt more like a series of vignettes than the start of a story; major story threads like the sudden powers are barely touched upon, instead focusing on the relationship between the Sean, Daniel and the long road ahead. Above all else this episode was a brilliant introduction to the series newest leads, and now my heart’s fully invested in seeing their journey through.

Life is Strange 2 Episode 1: Roads was developed by DONTNOD Entertainment and published by Square Enix. It was released September 27, 2018 for 7.99.

Read More
Batman: The Enemy Within Kicks off August 8