Scarygirl was developed by TikGames and published by Square Enix. It was released January 18, 2012 for 800 MSP. A copy of the game was provided for review purposes.

Everyone has bad dreams but some have deeper meanings than others. Scarygirl keeps having dreams where something or someone is haunting her. She decides to go on a journey to discover what her dreams really mean. Along the way, she’ll discover octopus shops, a man looking for his wife’s bones and some of the creepiest owls you’ll see.

Scarygirl‘s universe is based on the mind of Nathan Jurevicius who wrote the graphic novel and the story will be an animated film also. A whimsical tale about a girl with a tentacle arm in a 2D style platformer similar to Tomba! or classic PS1 style platformers. Ones that relied more on camera angle tricks rather than a 3D camera. Does it offer us a treat or is it a scare to play? Read on to find out. 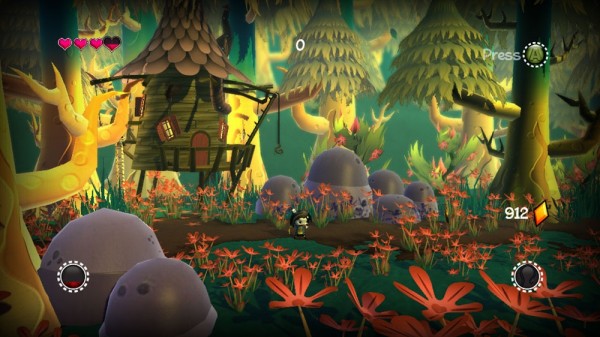 Occult Art – The art style in Scarygirl is very Tim Burton-esque where the art is vibrant but slightly off-kilter. The titular character has one arm longer than the other and a bone for the other, with stitching around her mouth and a party hat. The description of that alone will make a Hot Topic shopper fall in love. Other craziness involves Kung Fu rabbits and giant octopuses and let’s not forget the Onion Bar. We wonder what kind of inspiration Nathan has up his sleeves.

Just jumping? Nope, there’s fights – The game gives off the persona of just being a platformer but that tentacle arm will surprise you. Scarygirl will use her arm in battles with light and heavy attacks in addition to a grapple to roll her enemies in balls. She has a choice whether to throw it at other enemies or smash them with a rolled-up bad guy. It’s quite difficult to decide sometimes since they’re both so satisfying and empowering. Either way, someone’s turning into dust. There’s also a block mechanic that’s very similar to Super Smash Bros. which not only blocks but deflects projectiles. For a small girl, she sure knows how to take care of herself.

Environmental effects through the camera – If you’ve ever played Pandemonium! or the original Crash Bandicoot‘s on the PS1, the camera operates in the very same way. Instead of being in control, it’s set on the path but it zooms in and out or swerves around you at certain moments; This shows off some of the gorgeous environments. With Gothic forests, industrial cities, and rolling boulders that come right into the screen, there’s a lot of neat camera tricks in Scarygirl. 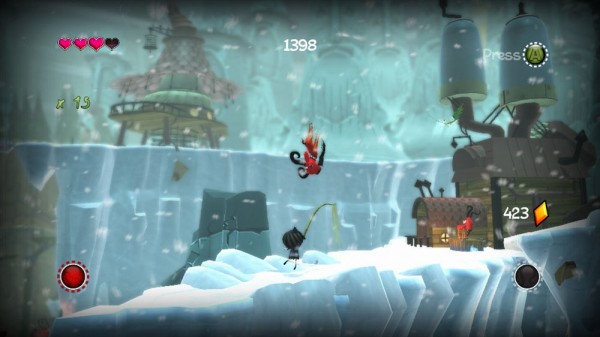 Fluidity – When you play a platformer, there’s a certain type of tightness you get from playing them. Super Meat Boy has tight, precise controls while LittleBigPlanet has really floaty platforming mechanics. Scarygirl falls in the floaty camp since it lacks a double jump and run mechanic and relies on your tentacle floating mechanic. Some of the levels require precision platforming and she’s sometimes not fast enough to react. Not to mention some surfaces that looks reachable, she won’t actually react to it. The game could lend to much faster style of play instead.

Misleading fights and lack of bosses – The first boss in the game isn’t actually all that terribly hard but figuring out the pattern feels slightly convoluted. Some of the regular fights even feel misleading where you’re required to be hitting at least four buttons in combat in case you want to block (which you’ll heavily rely on in later levels) or grapple. The difficulty ramps up around the later stages which is nice but ultimately feels like they wanted to make the game feel longer. For a neat combat system comes a few drawbacks in how it is presented.

Lack of online co-op – Do we still have to have this conversation? It’s becoming increasingly more annoying the more people make games local co-op only. People have friends who want to play side-scrollers over the Internet! Castle Crashers and ‘Splosion Man proved people will go from right to left online with others. Let us platform with friends please. It’s nice that Scarygirl has one but for local only, it might be hard to find friends who’ll want to play this.

Price confusion – When the game was originally released, it was 1200 MSP even though Major Nelson wrote it as 800 MSP. It was later fixed a week later even though some people already bought the game. Now, if it was still at 1200 MSP, we have a hard time recommending the game since it lacks a lot of features and would feel better at a cheaper price. At 800 MSP, it’s a bit of an easier pill to swallow but we might wait on a sale in the near future. If you happened to purchase the game at 1200 MSP, we suggest you contact the developer/publisher about it in case something can be done. 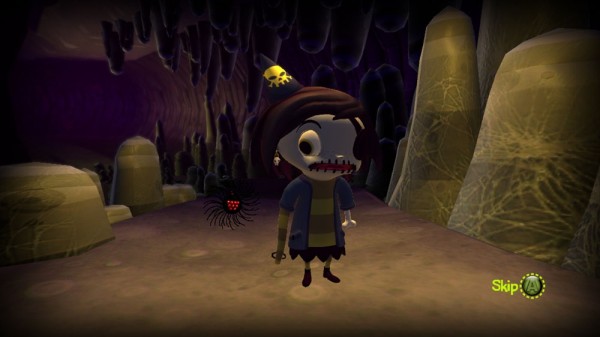 At the end of the day, Scarygirl is a fun if flawed, light-hearted platformer with some neat action elements. If you’re looking for something akin to ‘Splosion Man, you might not find it here but you’ll find some neat art, colorful characters, and whimsical narration. However, what it has in style, it lacks in fluidity in the platforming, leading to some imprecise moments. At 800 MSP, you should go out and try the game to see if it’s worth your money but with a crazy February looking ahead, you might want to save them up.