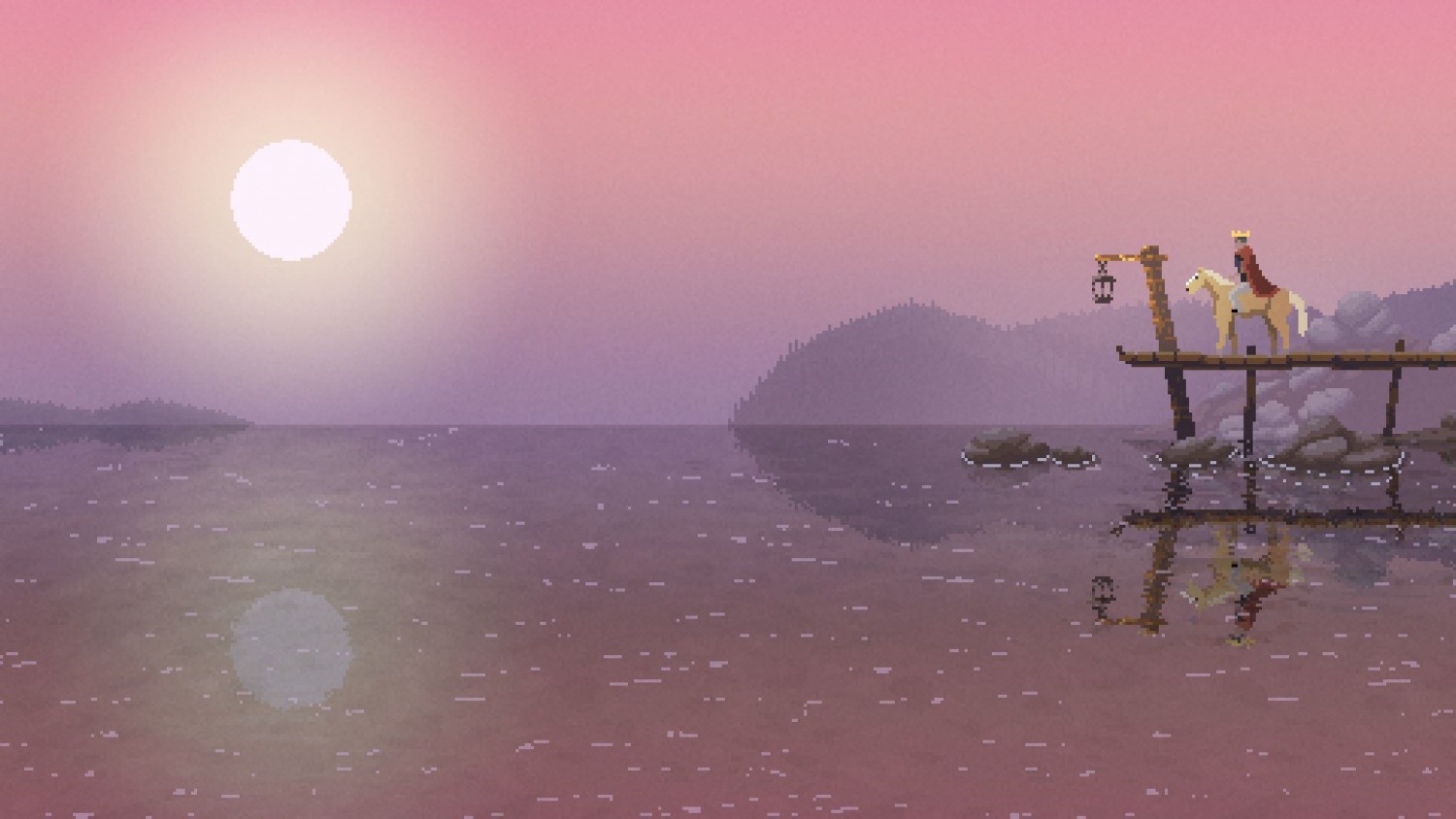 Kingdom: New Lands is described as a minimalist strategy game. And when they say minimalist, boy do they mean minimalist. It has minimal old school graphics, a subtle soundtrack, three button controls (left, right and A to spend coins), and next to no instruction. But minimal appearances can be deceiving because Kingdom: New Lands holds deep secrets and after spending my maximum spare time playing it, I was utterly consumed.

Before we launch in, you might want to know that Kingdom: New Lands was originally a PC only game known as just Kingdom. It was a sleeper hit earning rave reviews on the indie game circuit and recently received an expansion known as New Lands. It is this new version that makes its console debut on Xbox one.

Addicted to the crown – The basic premise of the game is to build your Kingdom on the 2D landscape and survive the onslaught of imps which attack when the sun sets. However your interaction with the world is limited to riding your horse left or right and spending coin. Meaning, whilst you can’t physically build your castle, giving coins to the right people will get it done for you. Similarly, there’s no attack button but you can of course pay people to do it for you. On the other hand, you yourself can be attacked and if your crown is stolen then it’s game over and since Kingdom: New Lands is also a roguelike, your downfall is permanent. However, each death feels more like a lesson learned than a punishment, which makes you want to keep trying. For instance, I ran out of coins on day 5 and couldn’t pay for new protective walls to be built, but on the next life I made it all the way to 15. The try after that. with more knowledge under my belt, I escaped the island altogether. There are 6 islands to make it through but you can also choose to just stay put and see how many days you can hold strong. With an achievement to make it all the way to 100 days, you’ve certainly got your work cut out and more often than not I found myself hanging in there until the wee hours of the morning.

Mysterious world – Kingdom: New Lands offers next to no instruction which is usually a bad thing, but here, it’s pretty much the main draw making it one of the most secretive games I’ve played. On starting a new game, you are assigned a random King or Queen to play as and a ghostly figure instructs you to light a fire then points you to a couple of beggars to recruit to your Kingdom. After that, you’re pretty much on your own. In most other games this could be a source of frustration but given the simplistic nature of the game, you don’t mind the odd punt in the dark. Whilst it may be tempting to fire up Google for some kind of guidance, much of the beauty of the game lies in your own discovery. Each small action you take has a subtle consequence: what happens if I give money to this church, what if I cut down these trees, what does upgrading this wall do? Well, I’m not going to tell you, but it’s rewarding when you find out. 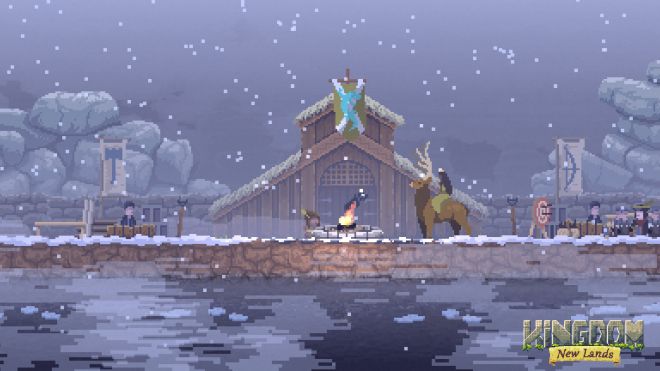 Pretty as a picture – Kingdom: New Lands graphics may have basic 8bit style, but on a large screen TV they are simply stunning. The water glistens, the stars sparkle and the wildlife is lush and beautiful. The characters and structures have a blocky look but are detailed enough to add character to your surroundings. The game also has a day to night cycle and whilst I loved galloping through the map with the wind in your hair during the day, it was at night with the glow from your torch and the moonlight in the background, that things were taken to another level on the beauty scale. As time progresses the weather also changes with the passing seasons keeping things interesting giving rise to moody fogs and harsh but magnificent winters.

Music to my ears – Similarly the game’s soundtrack is worthy of a mention too. Haunting and beautiful, the music is able to bring about a sense of calm despite some stressful situations I found myself in. Being wonderfully eerie and atmospheric too, it really adds to the game’s mysterious feel. It’s also not just there for décor either with subtle changes in tone and tempo giving hints to players what may be coming up next. The themes also change with the seasons so the music never feels repetitive like it can do on smaller budget games. I also enjoyed how despite game’s medieval setting, the music avoids being twee and is actually fairly modern and synthy whilst still fitting with the feel of the game and I could actually listen to this out with a gaming environment.

Point me to a checkpoint – To be honest I struggled to find something that I didn’t enjoy in Kingdom: New Lands. However the more I played, the more I could see potentially a time where I wouldn’t want to keep playing. Having roguelike features of permadeath hanging over me isn’t too much of an issue in the early stages, but as the game progresses and you devote more time to a particular run, the thought that one mistake could force you to have to start from scratch is a daunting one. It would be nice to at least have the option to store a checkpoint when starting on a new island so if you do die on level four or five you don’t have to go all the way back to the first island again. 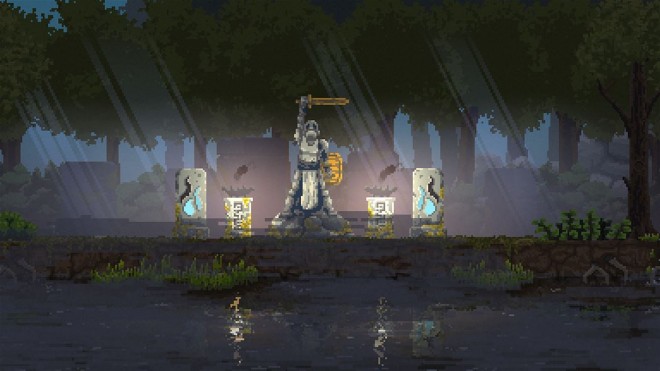 Kingdom: New Lands really took me by surprise. It’s a fairly basic strategy game with only the ability to go left or right and drop coins but the secretive gameplay drew me in and had me hooked. It’s the sort of game you can pour hours into and not even realise. The graphics, which I admit don’t look like anything special on a screenshot, are really impressive on a HDTV, and the games haunting soundtrack is utterly absorbing. If you’re already a strategy fan or enjoy the ever growing breed of roguelikes that seem to be springing up everywhere, you’ll almost certainly enjoy Kingdom: New Lands. On the other hand if you’re new to either then I can’t think of a better place to start.

Kingdom: New Lands was developed by Noio and published by Raw Fury on Xbox One. It was released August 10, 2016 for $14.99. A copy was provided for review purposes.