Street racing has evolved into something quite more furious. In a similar fashion to Blur, which I would call a matured version of Mario Kart, GRIP utilizes laps around a track with pick-ups. You can grab weapons and a defense shield to help you get ahead of the competition. As you win (or lose) and gain experience, you can customize your vehicle and eventually get new ones with better stats. What’s unique in GRIP is that your car can ride on ceilings and walls. The wheels are designed to “grip” onto any surface. It’s extremely fast-paced and defined accurately as a high octane racer.

Speed and Chaos — The ability to race on any surface creates a complex decision-making process that you must undertake in fractions of a second. You’re going extremely fast and momentum can not only be your friend but your enemy. There are speed boost arrows that can be on ceilings or the walls. You can play it safe on the ground or flip the world upside down to go faster. It’s quite the adrenaline rush and you pay for poor judgement. Along these routes you can also pick up some weapons to attack the rival cars you’re up against. There aren’t that many maps, but this is countered with the fact not every race will be the same depending on how you choose your routes. You can even go Mach speed with the right uses of ability and boosting. Any faster and I think the car would explode!

Audio — With a roar of the engine, the race starts. From there you’re treated to equally fast-paced music and sound effects. Taking tight turns or brushing up against the wall creates a low screeching sound. Falling onto the ground from the ceiling provides you with a thud. I haven’t tried it with headphones, but the sound coming from the TV was enough to tickle my senses. Hitting the nitro boost on my controller makes a sound that screams “you’re going so fast”. The only real thing I desired was the use of radio stations you find in a lot of sandbox games. Being able to pick what type of music I listened to would have given a personal touch. But what we have is what we have, and it sounds great!

Modes and Unlockables — There are a bunch of different choices when it comes to playing. You can play a tournament, arena, time trial, and even carkour levels. Sometimes games focus just on the racing, but it’s essential to have more to do because not everyone likes to spend all their time doing the same thing. As you race, you gain experience to level up and are rewarded customizable parts and even different cars. It’s a joy to choose your car and completely give it the paint job you want. I’ve always felt it’s important to give a game a sense of accomplishment and progression.

Boring Arsenal — With so many possibilities, it’s a shame all of the weapons are so basic. There is a machine gun, a missile, a cluster of missiles, and a back shield. That’s what you start with at least, gaining another missile that hits whoever is in first (yep, like a blue shell in Mario Kart). Where is an area of effect shock wave that can push cars off the road? Or a lightning bolt that shocks and slows down another vehicle? There is just nothing at all cool about what is offered. It’s so basic that you barely even need to use it to succeed. You’re be wanting the speed boost ability every single time. In the choice of fight or flight, choosing “flight” is the way to go.

Uninspiring Tracks — While the areas you race within could have been a grand display of neon lights and explosions, we’re given kind of a mediocre set to race in. There are some things you can destroy if you have weapons (and random barrels) but they tend to just be in your way. There are no awesome shortcuts to shoot your way through (at least that I could find). While there are some neat transitions with gravity, there is nothing amazing to look at. Going through a tunnel that looks so basic isn’t awe-inspiring. Where are the cool lights and shadows that make you feel like the track is alive? It almost feels like you’re in a custom track that someone made. Everything is just so bland.

Wall Transitions — While the ceiling and ground areas feel like a smooth ride, once you’re on a wall getting off of it usually becomes a disaster. The car doesn’t automatically rotate and you end up landing on the side, skidding or rolling which slows you down. Adding a way to rotate your car in mid-air would have been a godsend. It also would have added much-needed control. You’re often punished for taking the wall route, and it makes no sense why. I’ve tried jumping and that still didn’t help. It even looks like it’s meant to be used. You get on the wall and there is a kind of “jump” or fall-off area that never works to your benefit. It makes me question its existence.

I love the idea of being able to race on practically any surface. It adds depth to an already crazy fast racer. With so many customizable parts, modes, and multiplayer options, you’ll find enough content for hours upon hours of gameplay. Unfortunately, the combat aspect is bland and could have used a lot more creativity. It averages out the game to being, well, average. It can get a bit repetitive but then again I’m not a huge fan of racing games, though I’ve played a lot. What I am a huge fan of, is combat racing like Blur which has a heavy focus on combat that actually changes the outcome of the race. GRIP was fast enough to be first in speed but comes last in vehicle combat.

GRIP was published by Wired Productions and developed by Caged Element / Warped Digital Entertainment on Xbox One. It was released on November 6, 2018, for $39.99. A copy was provided through Game Pass. 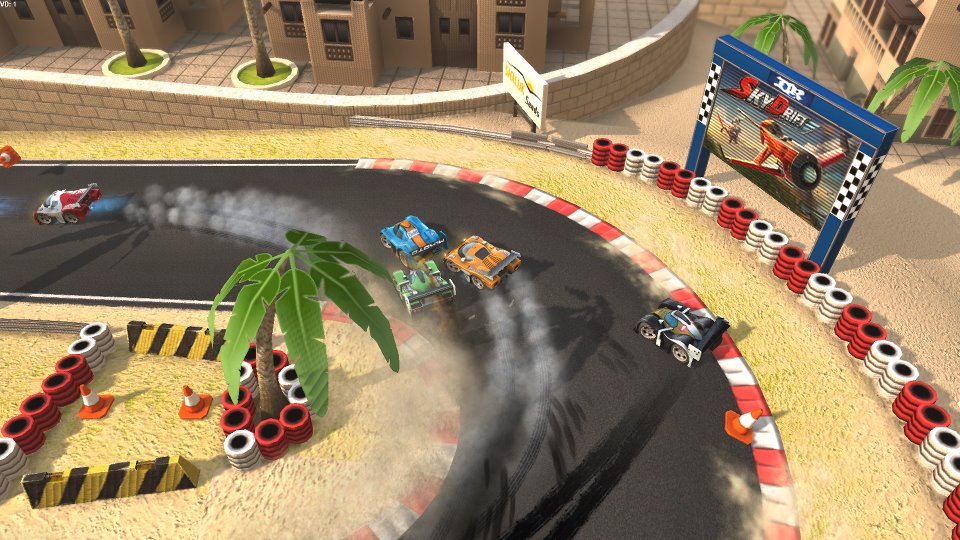