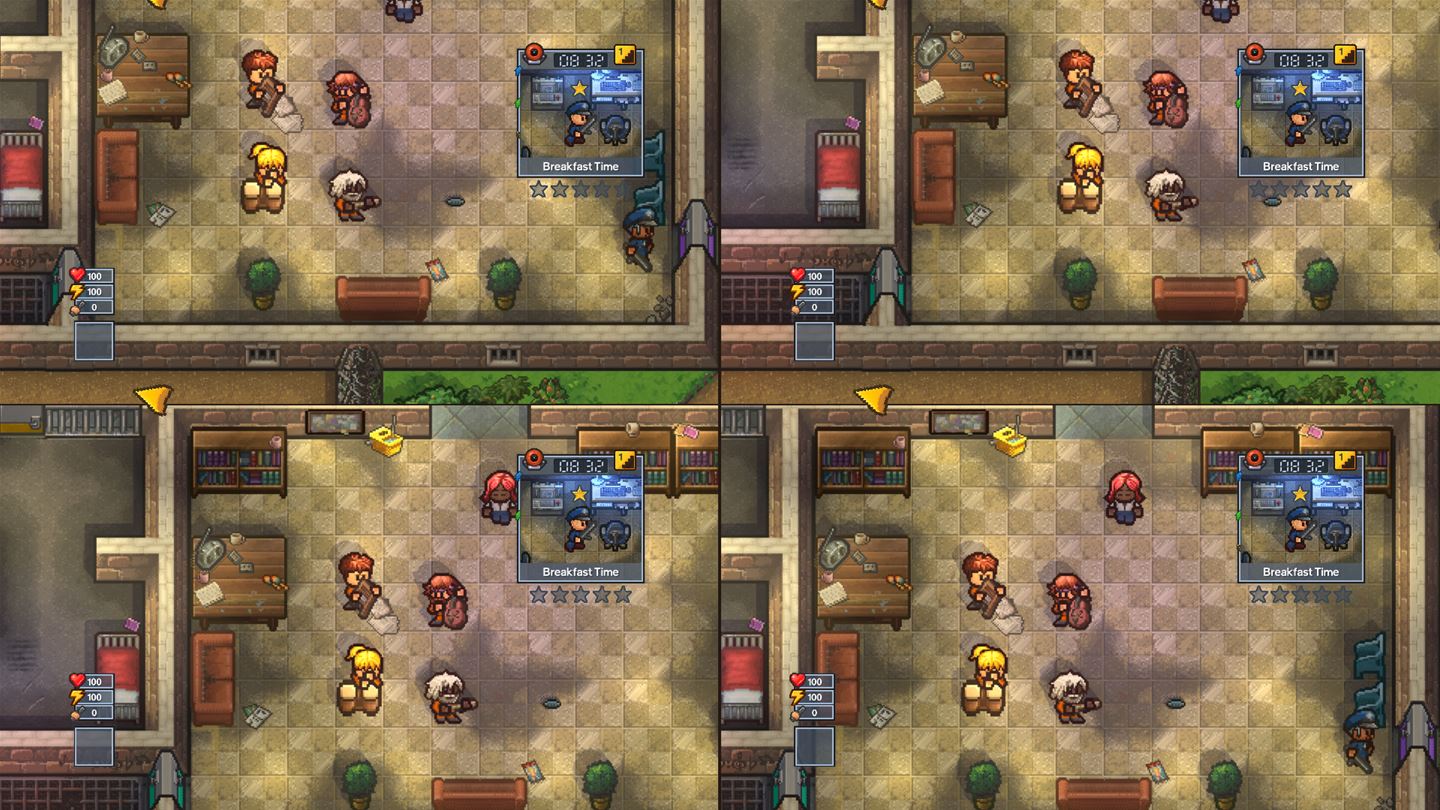 Back for another stretch in the clink, The Escapists is slopping out on Xbox One again. But unlike 2015’s The Walking Dead spin-off, The Escapists 2 is a full sequel with shinier graphics, new modes, bigger prisons, new multiplayer option, and best of all, stairs!

For those who’ve not played any of the previous games in the series, The Escapists 2 sees you thrown back in prison with no sign of parole. If you ever want to see the outside world again, you’ll need to hatch an escape plan, looting supplies or buying them from other prisoners, and then using them to craft tools and weapons. All the while, you’ll need to conform to regular prison life by showing up for roll call, dinner and various other activities or else your threat level will increase, and you’ll be sent to solitary confinement. 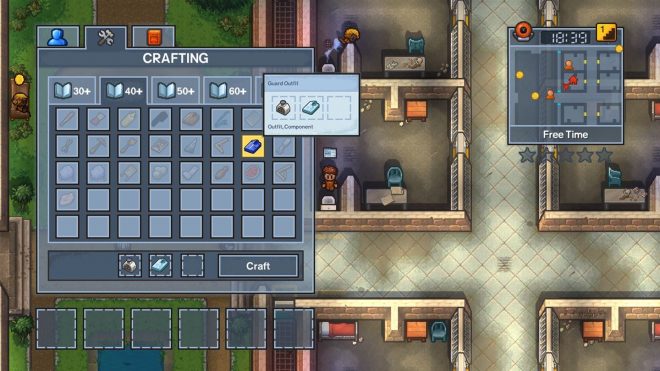 Sandbox – In the same manner as the previous iterations, you are largely left to play The Escapists 2 as you see fit. Your goal is to escape, but there is no time limit (at least on the classic levels), so you can easily take your time and blend in with prison life. Become a rebel, starting fights and stealing contraband till you end up in solitary, or you can be a goody two shoes and become the model prisoner, following your daily tasks and chores like clockwork. All viable ways to figure out the ins and outs of the prison until you come up with a cunning plan.

Checkbox – A true upgrade, The Escapists 2 introduces a few new gameplay mechanics. One of the first you’ll notice is the new Criminal Record screen. This details the main escape methods for each prison and checks them off as you play. These methods include the usual “perimeter break” where you may choose to cut through fences or knock through walls or even dig your way out, but also lists new set escape methods where you utilize a unique aspect of the prison to escape. For example in the first prison, you’ll notice a camera crew wandering around. Without giving away any spoilers, you may want to follow them around to see how they could help you get out of jail. Another big change is the new mobile prison levels which offer a fun timed challenge with a few set methods of escape. Can you find them all?

Friendbox? – Probably the biggest change in The Escapists 2 is the introduction of multiplayer. Players can group up with others online, or beside them on the couch thanks to the split screen option, to plot your escape together. In fact, there are even some specially designed escapes which can only be done with more than one player. The feature is managed as a drop-in/drop-out mechanic and allows you to set your game on the hop to be local, friends only or online. In addition, there is also a new versus mode where you can race against other players to escape the fastest from each prison. This mode forgoes some of the usual rules like daily tasks and prison money to allow for a speedier more arcade playstyle. 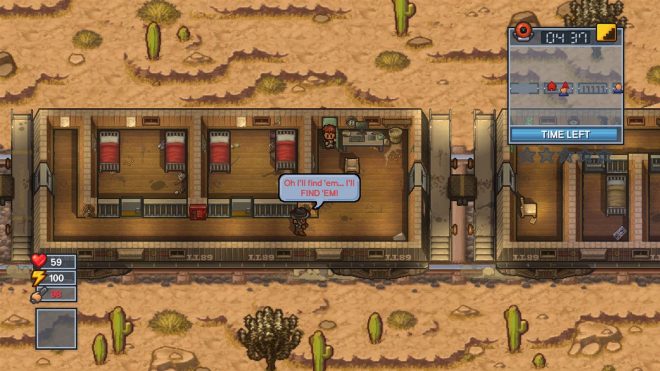 Waiting game – Once you have set your mind to your escape plan and are ready to put things into action, be prepared to hang around a bit. Often the required items won’t spawn for you to loot meaning you need to continue attending the daily roll calls, meals and your menial prison job. What was new and fun at first can soon become a bore as you wait for enough chisels or duct tape to show up to allow you to craft the right tools for the job.

Tougher Sentences – In the previous iteration of The Escapists, your progress was saved as you went to sleep. This is still the case. However, there is also a new auto-save system which punishes you for every error and infinitely ramps up the difficulty in the progress. Previously if you messed up, you could reload the day, now, however, the game auto-saves as soon as you are caught or knocked and all contraband items are removed from your inventory. This means any silly mistake could potentially cost you a few hours of prep work. Whist this may add a sense of realism, it also meant I was less likely to take risks trying out new things for fear that it would cost me dearly in the long run. The game is pretty difficult, to begin with so it would have been better if this was part of an optional “Iron Man” mode for those feeling particularly hardcore. 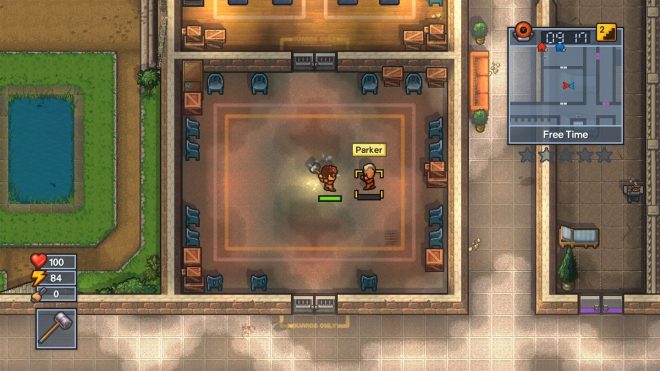 The Escapists 2 is a sequel that manages to build and expand upon the original game in every way, whilst also still making it a great starting point for newcomers. Those familiar with the concept will still have lots to learn with the new mobile prison challenges and unique escape methods, and the game still has that surprising level of difficulty. At the same time, however, The Escapists 2 offers a lot more instruction than the original, with a new tutorial level, crafting guide and a slightly more linear approach overall. The introduction of multiplayer is also a bonus, giving players, even more, ways to escape and cause general havoc.

The Escapists 2 was developed by Mouldy Toof and published by Team17 on Xbox One. It was released on August 22, 2017, for $19.99. A copy was provided for review purposes. 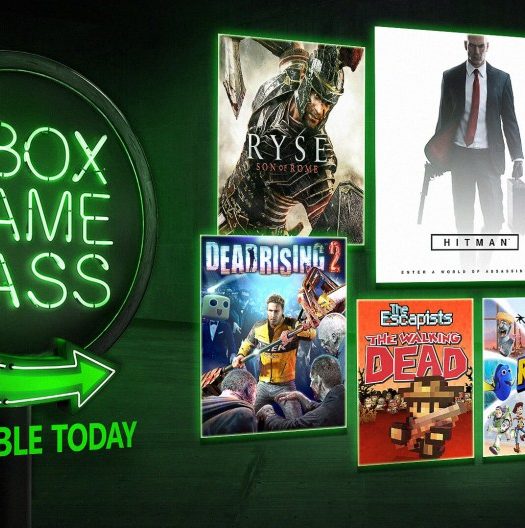 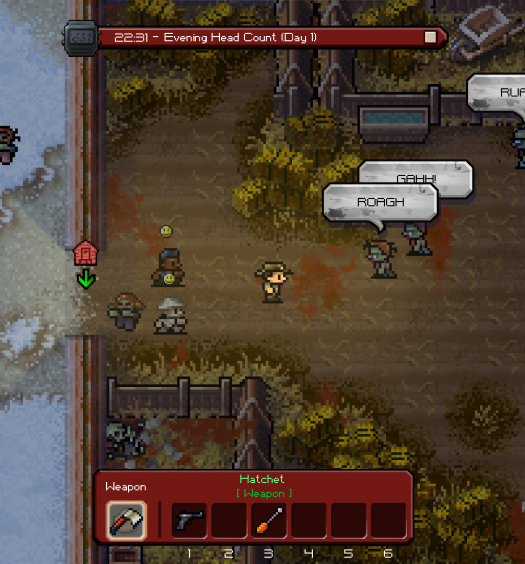