Real time strategy and the second dimension have blended before with games like Grim Grimoire and Swords & Soldiers, but it’s not the most common of sub-genres. That said, CastleStorm blends the RTS with even smaller genres including artillery shooters (Worms) and tower defense. The resulting smoothie is not only delicious, it offers a unique flavor. 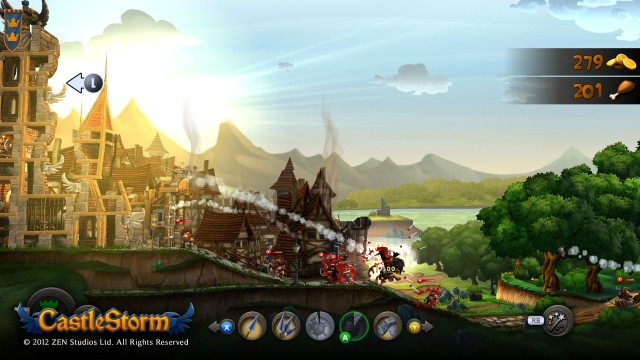 In our demo with pinball masters Zen Studios, we got to sample both the Knight and Viking arsenals. Each faction had a fair amount of options available across all categories, but we were told the repertoires are only about 75% complete. Before each mission, you may outfit your castle for the upcoming battle. Players will get to select up to five unit types to dispatch, projectiles to launch, and abilities to choose from. Units, weapons and abilities provide a wide range of tactical functions, and it’s important to bring a variety of armaments to each mission.

Collect money by defeating incoming troops. Food — which automatically generates at a steady pace — and money are spent on deploying troops to the battlefield. These troops range from tanky knights to archers who will attack from afar, pushing back the enemy’s forces and making their way to the flag.

The troops fight on the ground while you loose arrows, rocks and exploding apples from your ballista to support them. The more powerful the weapon the longer the cooldown, so you won’t be able to spam triple-arrows as quickly as single arrows. Well, not normally anyways. Rack up headshots and mow down enemies in quick succession to catch “on fire”. While on fire you have no cooldowns, so feel free to spam both projectiles and troop production. The build at E3 was pretty early in development so the game still needs to be balanced, but at the moment catching on fire is a surefire way to secure victory. 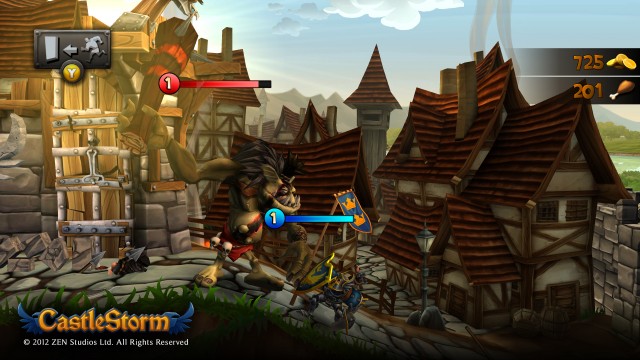 CastleStorm is a very fast paced game. At all times you’ll have to find balance between a healthy supply of ground troops and shooting the crap out of anything and everything you see. In my first mission I lost because my enemy’s forces had quietly waltzed into my castle, took the flag and gone home with it, without leaving so much as a note! On my second try, I found I was constantly juggling building troops, shooting enemy troops in the face and bowling exploding sheep at the castle. My on-the-fly strategy came through and I managed victory, somehow. On my second mission I paid more attention to the enemy’s troop composition, whittled away their forces with well placed arrows and seized victory with far less trouble.

The Knight faction was pretty straightforward, offering more or less basic (though varied) units and weapons to choose from. Cavalry charged at the enemy base while archers picked off the enemy’s supporting line. With all manner of apple bombs and boulders raining down my enemies, the battlefield was a bloody, fantastical scene. The bowling sheep bomb was pretty unique (and overpowered at the moment) and did a real number to the enemy castle’s foundation, knocking it to the ground.

While I personally didn’t play the Vikings [editors note: another writer played them while Todd watched], their differences from the Knights were slight, but noticeable. Axe throwers aimed at the castle, the “knight” equivalent used a shield for protection and the quick “dire wolf” darted across the battlefield far faster than any Knight troop. Their ballista weapons were just as ridiculous including a massive grenade and a giant axe which did severe damage to all enemies it pierced through.

The magical abilities span roles such as shielding your troops or allowing you to send your hero to the field of battle. Just be careful, if he is vanquished, you’ll be unable to perform any actions for a short amount of time. What’s a castle with no leader? 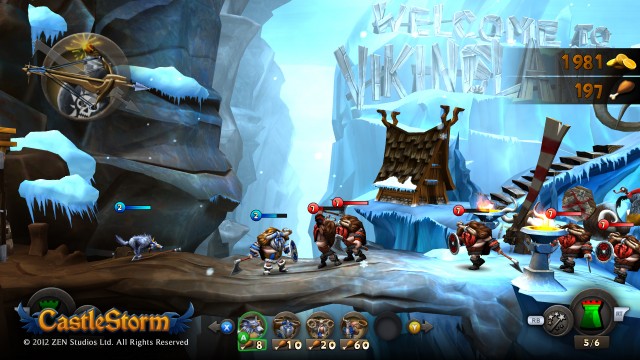 Choosing which weapons and troops to bring to the battlefield isn’t entirely handled by menus. While we weren’t able to see exactly how it works, we were told that the actual, physical makeup of your castle dictates what you can use in combat. Your castle thus is made up of different rooms which provide access to troops or make them stronger in some way. Should any particular room be destroyed, you lose the benefit that room provided to your army; same for your enemy.

After each battle in CastleStorm you’ll be awarded money usable to upgrade weapons, troops or abilities and purchase access to new ones. Your single player, coop and multiplayer castles have separate progression so you can have different castles for each. Playing single player takes you through both the Knights and the Vikings’ story (in one campaign), while in multiplayer you can choose which side to play. The multiplayer will have both local and online one-on-one capabilities on symmetrical battlefields. 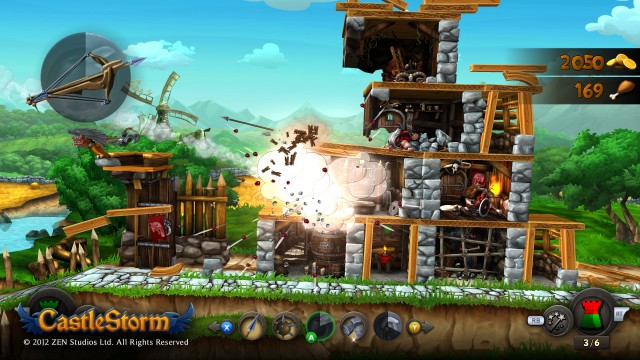 CastleStorm’s strategy and action are well married, so we’re calling it a 2D strategaction game [Editors Note: I prefer strategy smoothie]. There’s plenty of planning before a mission and it sets the foundation of your strategy, but once the arrows and swords start flying it’s all about those tough decisions. Do you build up a healthy-but-slow army to take care of itself on the ground, or pick away at the forces yourself until you catch on fire? There’s a lot to manage between the constant barrage of projectiles and the onslaught of warriors, but cutting a swathe through the chaos manages to be both entertaining and challenging.

Zen Studio’s next XBLA title since smash hit Pinball FX 2 will be out sometime this Summer.