Burnout Crash was developed by Criterion Games and published by EA. It was released September 21, 2011 for 800 MSP. A copy of the game was provided for review purposes.

Crashing cars has always been the appeal and the overall point of the Burnout series. Up until the last installment in the series, Burnout Paradise, Crash mode had been a staple that rivaled the the core racing game in popularity. Believe it or not, six years have passed since Criterion’s puzzle-like mode has seen a release of any kind. The wait has been far too long.

In Burnout Crash, the series is taken to new levels of absurdity as players wreak havoc in Crash City; a city with locations as diverse as those at a movie studio and more natural disasters than a town in Sim City. The game consists of 18 intersections ready to be deconstructed in 3 game modes. Each revolves around the concept of driving a car into a busy intersection and using a recharging explosive blast, known as a Crashbreaker, to how much damage can be done under a given mode’s conditions. How does Crash hold up in it’s solo debut?


Here’s what we liked:

A well-planned accident – Taking the much celebrated Crash Mode into it’s own game was a brilliant decision, but fans of Burnout may have valid skepticism. What worried people the most was taking that concept and changing the perspective to a top-down view, and in turn, away from the twisting metal and flying sparks. Rest assured that, while it takes some getting used to, the changes made were for best. The new camera angle provides a bird’s-eye view of intersections, allowing the player to see everything from the flow of traffic to buildings, explosive barrels, and special vehicles to destroy. While the explosions aren’t as detailed as they once were, they haven’t lost their satisfaction. Instead of just taking out automobiles, the city itself is a target. Houses and monuments can be leveled by the explosions caused by the player and incidental collisions. Specifically in Rush Hour mode, Super Features are brought down upon the city to create even more destruction. Depending on which part of Crash City you’re in a Lobster Monster, UFO, or a plane crash will level remaining structures and autos, giving a boost to your final score. 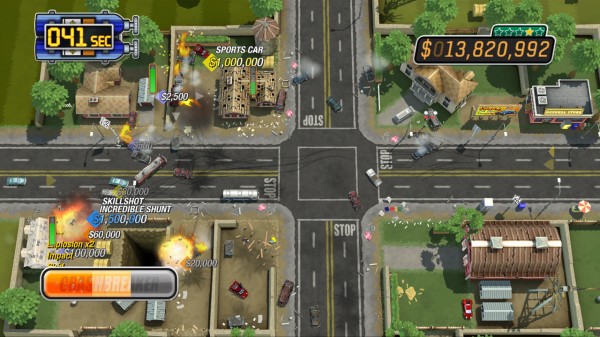 A reason to stay- Each of the 54 levels in Burnout Crash contains a list of 5 obtainable stars that are unlocked by reaching a high enough damage toll or completing a certain task in a scenario. As one progresses through the game, stars will rank the player up and reward them with new vehicles that provide better Aftertouch control or more powerful Crashbreakers. On top of the 270 obtainable stars, Criterion has brought their innovative Autolog to Crash. Autolog is the game’s way of posting high scores to leaderboards and informing the player of where they stand among their friends in each scenario. It creates a constant back and forth that will drive Crash for months to come. Along with the constant score updates, score challenges can be made to friends keeping the game ever-competitive.

A driving soundtrack – EA and Criterion are known for inserting great licensed music into their games and Crash is no exception. Special vehicles or “special feature” (environmental event) has it’s own song associated to it from the Bulldozer rolling in to Salt-n-Pepa’s “Push It”, a blizzard freezing roads in the key of “Ice Ice Baby”, and lightning storms thundering “It’s Raining Men.” It may sound dumb and cheesy on paper, but it’s a fun soundtrack that adds significantly to the ridiculousness of the game. The Primitives’ fantastic tune, “Crash,” may be the highlight of the tracks as it plays the role of title theme and loops in the background occasionally. 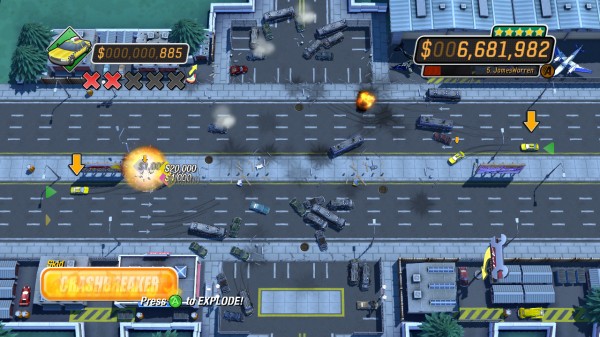 Driving standing up – Kinect support rounds out the package, but overall doesn’t do much that’s worth using outside of a party setting. The initial drive to the accident scene is acted out by miming steering a wheel while jumping and moving around the Kinect’s field of view controls the deployment and direction of the Crashbreaker. What the sensor brings to the table is in the multiplayer setting when two teams of up to 14 people can send representatives in front of the Kinect to take control. If you find yourself in favor of using the Kinect, it can be accessed by the press of a button before any course is started. The controls make sense and work as intended, but just isn’t all that fun.

No couch competition – One of the biggest problems Burnout Crash has, and most unforgivable, is the absolute lack of non-motion controlled local multiplayer. The only way the game keeps track of controller based competitions is through Autolog which would have to be preformed over two separate consoles. Otherwise you’re stuck jotting down your roommate’s score on a pad of paper and proceed to make an attempt to beat it. A terrible oversight that should be the focus of future DLC.

Despite the flaws in local multiplayer, Burnout Crash is still a winner in every other aspect. Crash City is worth the visit and may even be a constant vacation spot. Just don’t be put off by the 20 car pile ups, 20 year old songs, and 20 foot tidal waves. Embrace them because they are part of what make Crash special.