Awesomenauts Assemble! is a 2D action-platforming MOBA. It seems like such an odd and simple concept; taking everything you love about games Like DOTA and League of Legends and simplifying it into a streamlined easy to digest sidescrolling system. Yet at the end of the day, it feels so deep and right.

Awesomenauts Assemble! is sort of a re-release designed for current gen consoles bringing years of updates and balancing with it. Offering up two lanes, a top and a bottom, you are forced to pick and choose your offensive or defensive stances carefully. Between the “jungles” and different strength creeps, this intergalactic battle never stops. 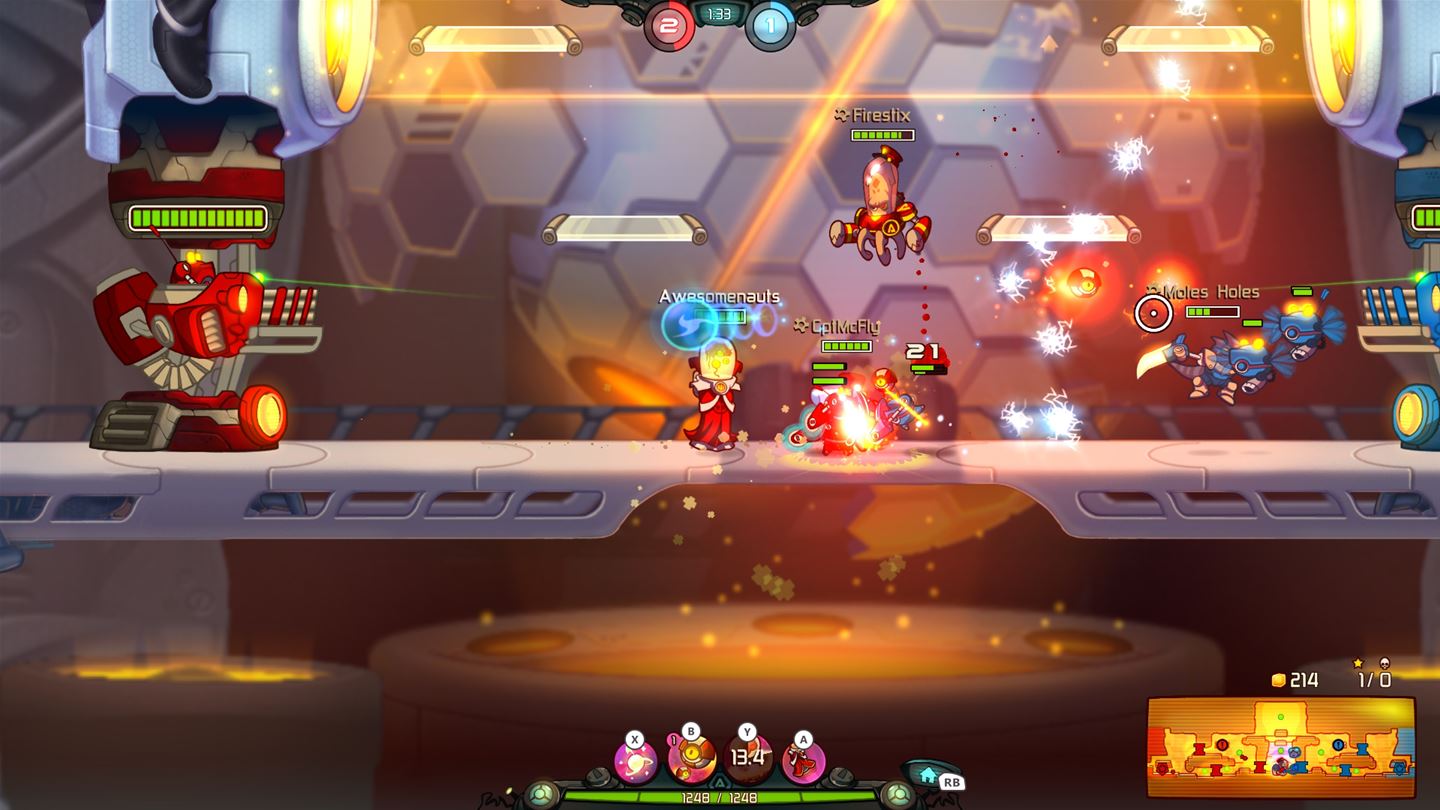 Character variety – Awesomenauts Assemble! offers of up right around 26 different mercenaries to choose from when including all DLC. Each character is unique and feels and plays completely different. Each character has their own strengths, weaknesses and attacks; making it essential to build your group together and actually play as a team. There should be a hero for any play-style.

Shopping help – If you have never played a MOBA or even a RPG for that matter, jumping into the store can feel confusing and overwhelming. Fortunately the shop has items highlighted for you one at a time, keeping you focused on what it is most useful for you to purchase next. This won’t build you some over the top tank or pusher, but it will build you a well rounded character who can perform their basic functions with no problem which is great for beginners.

Beautiful style – Ronimo Games has done a great job at delivering vibrant, bright and detailed graphics. Everything just pops and stands out from each other, never blending in or fading out. Even when the stage is dark and dingy it still feels beautifully detailed and easily readable.

Bots – MOBA says multiplayer right in the title [Editors Note: Learn about MOBAS here], but it doesn’t state that you have to play against other people. So if the online community is just getting under your skin or you just like to play alone, you can always play with bots. The difficulty level (A.I.) is what makes it so great, ramping up over six levels, going from super novice to pro. Anyone will be able to find a good difficulty level for themselves.

Splitscreen – Whether you are playing as a team or trying to kill one another, part of the fun of multiplayer games is playing with your friends. As a kid, one of my favorite things to do was to invite several friends over, hook up my multiadapter on my SNES and get down on some of our favorite video games. Awesomenauts Assemble! brings that back, allowing three people to share one couch, build their team and go kill people, no adaptor needed. 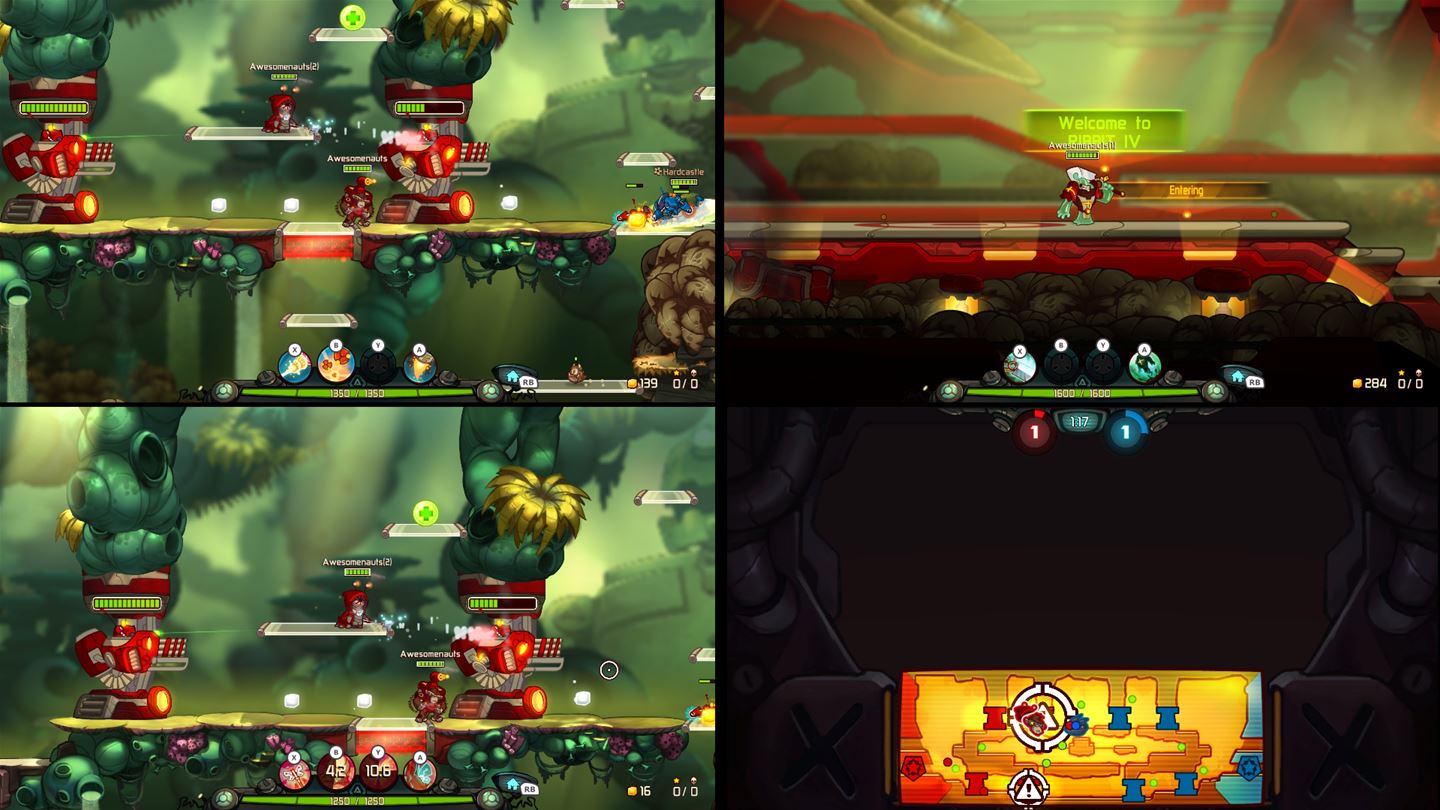 Uneven matching – When playing online, you never want to just get stomped over and over again, yet I constantly found myself in this position. Now before you go spew hatred at me and saying it’s because you suck, I frequently play with one of the top ten ranked players in the world so I have been trained rather well. When you are paired with two randoms who are bottom of the barrel (this seems to be the norm) and it chooses to set you up against a trio playing with voice communication all with top rankings, it seems a little lop sided. Some sort of matchmaking improvements are needed.

Need more stages – Six stages out the gate may seem like a lot to most people, but here it runs its course pretty quickly. Yeah, yeah, I know, MOBA’s are supposed to be about the gameplay more than the stage (League of Legends for example is played on the same three lane map every ranked game), but when you offer one game type and no lane variances, then the amount of levels matter. I started wanting new levels immediately. Realizing that after two or three matches on each level, I had them memorized and by the end of the first night, already have played each level at least 15 times, they started to blend together and not matter.

One game mode – This is something that feels highly overlooked. When you have 26 different characters and six different levels, the next obvious step (I would think) is offering up different game modes. Being forced to play one game mode, especially if you don’t have many friends who play or at least non that are on at the moment, can get rather monotonous. Most other MOBA games at least have some casual modes to play periodically.

I am simply gushing over this game. Awesomenauts Assemble! takes everything I love about action platformers and mashes it up almost perfectly with the MOBA genre. Whether you’re playing online or you’re playing against bots, each battle feels fast and exciting. With just a few downfalls, which you will likely quickly get over, Awesomenauts Assemble! is a great entry level game to the MOBA category. Magnetic: Cage Closed coming to Xbox One in March