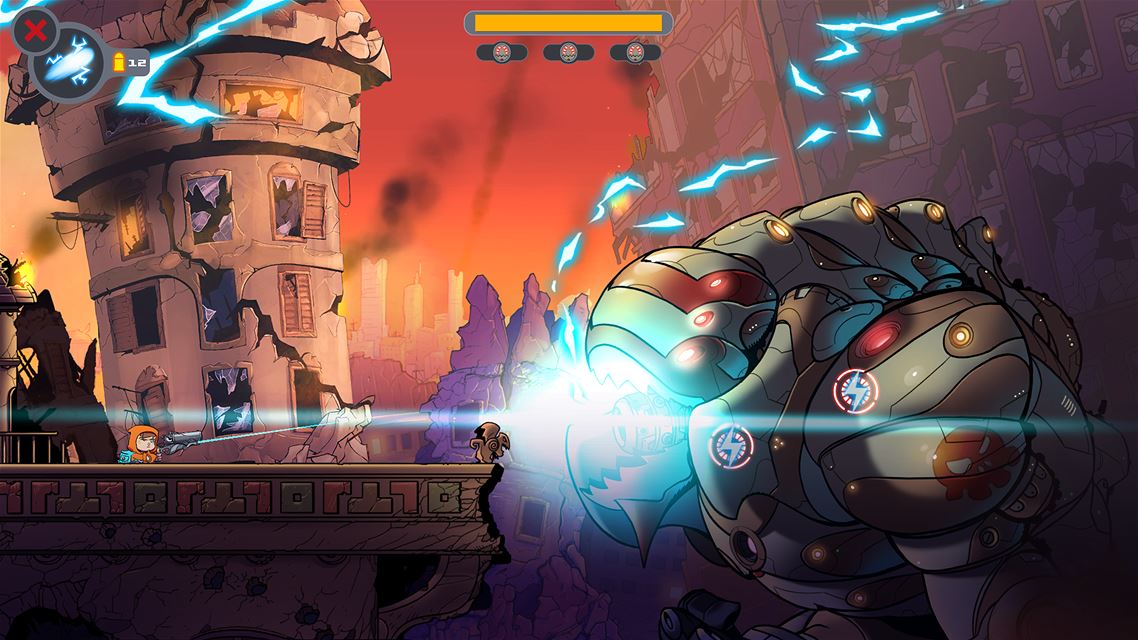 Super Awesome Hyper Dimensional Mega Team (SAHDMT) has no quips about what Rise & Shine is at its core. It knows Rise & Shine is a video game and takes every advantage of that. You Play as a young boy named Rise who has been given a living gun named Shine and must bring him to the king. Shine is a unique gun; he grants the carrier unlimited respawns and is the key to saving Gamearth, your home planet.

As you make your way to the king, you will learn several new skills that Shine can do. Shine has two bullets: standard and electric, he also has two alt-fires for each type: explosive, which gives you a handheld mortar that sticks to things when fully charged and bullet control, which allows you to control the direction and the speed of your shot with the right stick within certain areas. Each gun battle not only feels like an emotional heart pumping moment but also manages to feel like a challenging puzzle you have to solve. 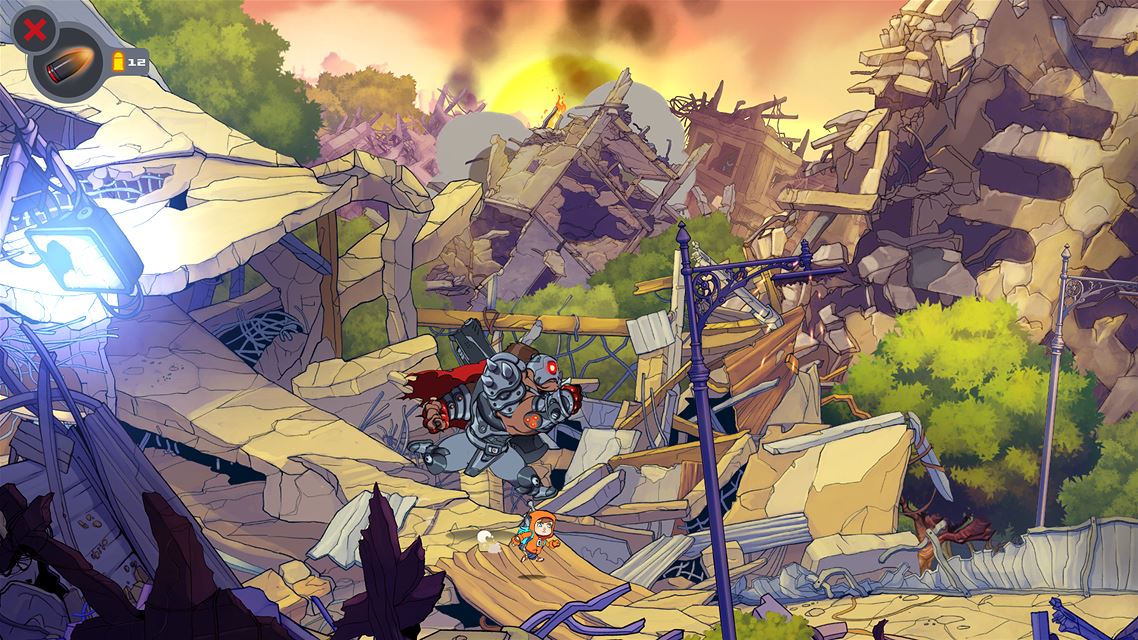 Tough love – So many games seem to have forgotten how to handle difficulty well. Many games baby you 90% of the way and then make the last 10% impossible, never giving you the chance to hone your skills to what you need them to be. Rise & Shine takes no time to hand you your rear-end and tell you to try again. Though no matter how many times I died, no matter how many times I was one shot away from victory just to be blown to a million pieces again, I always wanted to try one more time. I could feel my blood rising and palms sweating during almost every battle. But every time I died, I got that much further on my next go. So no matter how hard it got, I was always able to keep chipping at it until I won.

Not so fast – Although Rise & Shine seems nothing more than a nail-biting, edge of your seat 2d shooter, it feels much deeper once you dive into the game. You quickly realize that blasting your way through, no matter how much of a crack shot you are, won’t work. You will have to use cover as well as your ability to dash and jump to avoid gunfire, missiles and enemies. The enemy design is rather simple, but each one has a different attack, forcing you always to be conscious of who is on the screen and changing your tactics on the fly.

It’s so fluffy – Rise & Shine is full of blood, guts, death and destruction, yet still feels pretty and cuddly. I know that makes no sense, but that’s how it feels. Bright colors and an almost too cute art style will make you almost forget that you are in a war torn town battling for your life. 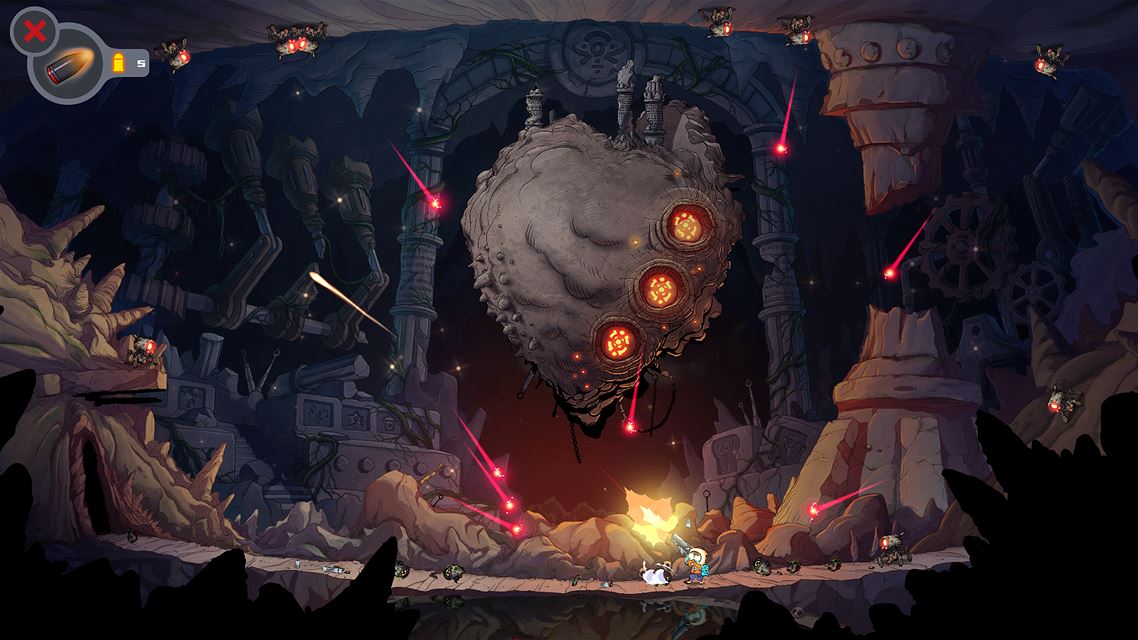 Too much is just too much – No time is wasted in establishing that not only are you playing a game, but the game knows you are playing it. It makes references to many other games and even has look-alikes for some characters. At first, it is funny and very entertaining, but that ends very quickly. Soon I was cringing at every game reference, wishing they would just stop and delete the story altogether and let me get back to the gameplay.

That’s not fair – Glitches happen, I do understand that. I can’t accept when a glitch happens after death that keeps me from using my gun. More so, it is an even bigger problem when the only way to undo that glitch is to reload the level. This particle problem only occurred in one spot, but it was a boss battle, so I had to reload many times. Another glitch I dealt with was the zombies only seemed to be able to be hit from one side. Using the dash, you could get past them as they rose out of the ground, and instead of turning around to chase you, they moonwalked backward at you. However, they don’t take damage from the back no many how many times you shoot them or what ammo you use. There are a few weird moments that just feel a tad unfair.

Games are too old for this – At this point in the gaming industry, there are two things I expect every game to have: decent load times and remappable controls. If you don’t have this, you are shooting yourself in the foot. I have quit many games simply because of waiting too long for a game that’s to load or not comfortably being able to play the game because the buttons were mapped awkwardly. Rise & Shine is a violator of both these rules and I can not find any reason why it had to be this way. 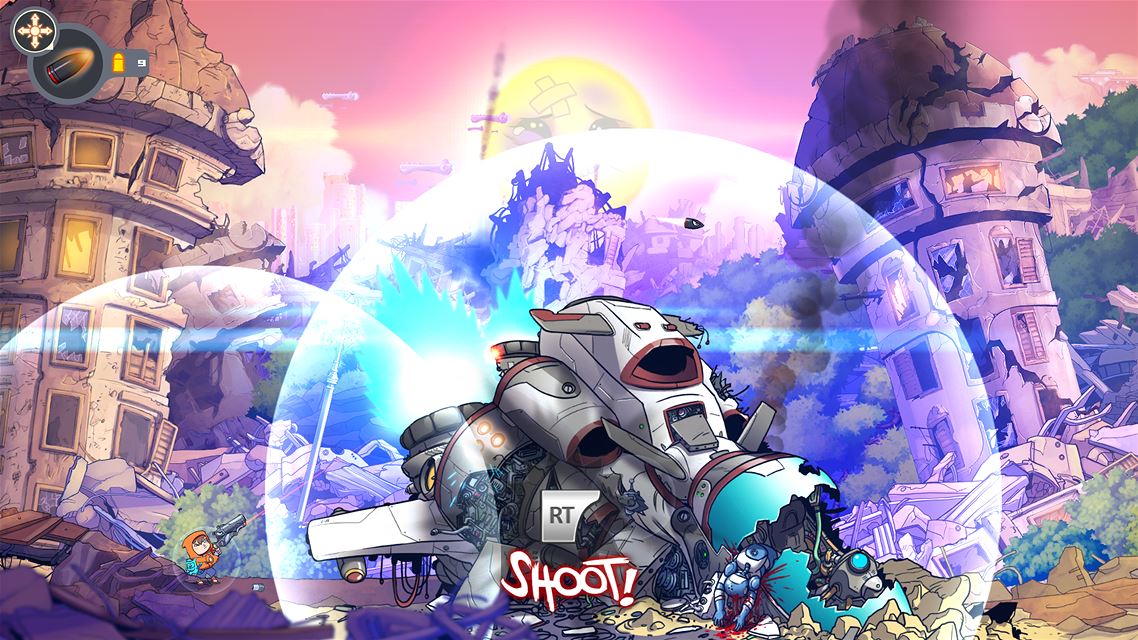 Once I defeated the final boss, I felt a sense of accomplishment and pride; my victory was well-earned. I had a great time playing through Rise & Shine, but sadly, I know I’ll never go back to it. I wanted to complete it; I very much so enjoyed the final twist of the story and the end “solution” even more. Enjoying the end, however, doesn’t change the fact that the glitches, bad button layout and overly annoying self-awareness, really make it hard to enjoy at times.

Rise & Shine was developed by Super Awesome Hyper Dimensional Mega Team and published by Adult Swim Games. It was released on January 13, 2017, for $14.99 and can be purchased HERE. An early copy of the game was provided for review purposes. 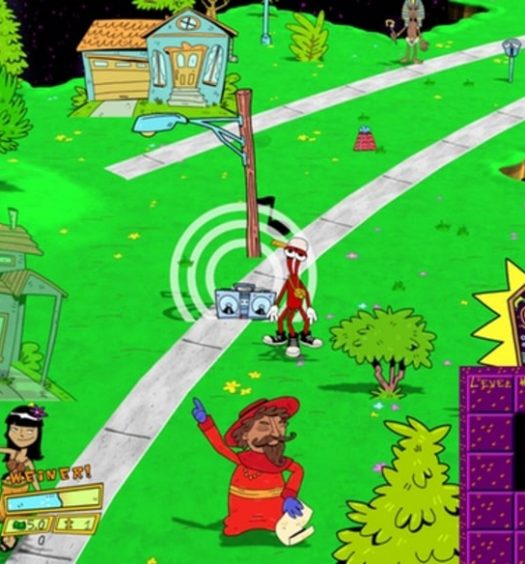