XBLIG Monthly Roundup features five of the best Indie games from the past month of releases on the marketplace. There’s a lot to sift through on the XBLIG marketplace, so let us tell you what we found during our daily rounds. These are some of the best games that XBLIG has to offer for the month of May, 2011: 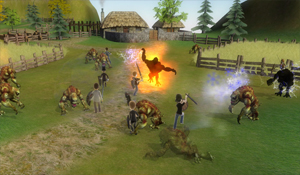 Avatar Legends is an RPG that features your Xbox Live avatar as the hero. A 10-hour single player campaign is included along with the ability to create and share your own single player adventures. Online multiplayer is also included with the ability for up to six players to drop-in and drop-out with no issues. Global high scores and unlockable titles will provide incentive to play for countless hours along with a never ending well of content due to the fact that sharing level creations has been seamlessly integrated. If you like RPG’s or games that implement avatar’s well, then Avatar Legends is your game. 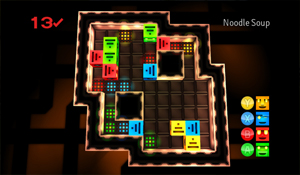 UpBot Goes Up is a puzzle game that has players trying to move each robot to their color-coordinated launch pads. The trick is that each robot can only move in one direction. The key to solving each of the 60 included levels is forcing each robot to work together as they are allowed to push each other in directions they normally couldn’t travel. A colorblind mode is included for all those who would need it, so there’s no excuse not to download UpBot Goes Up if you’re a puzzle game lover. 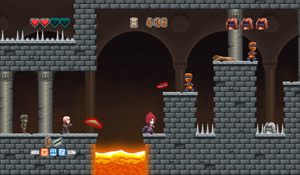 Akane the Kunoichi is an action/platformer where you take control of Akane, a Kunoichi secretary who is in love with her master Goro. Goro has been kidnapped and it’s up to Akane to rescue him. The game plays very much like Shinobi. Akane has the ability to jump, throw knives and slowly slide down walls. There are a few special abilities that can be cycled through so players can use the correct ability for a specific situation. If you like platformers with a bit more of a challenge, then Akane the Kunoichi is an obvious choice for only 80MS points. 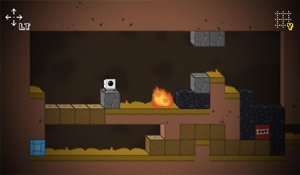 Blocks That Matter is a puzzle game where you control Tetrabot, who is on a mission to save his kidnapped creators. You drill trough various blocks and essentially collect them so that you can place those blocks somewhere else in each level. In order to reach higher areas, you’ll need to place blocks very strategically as you must place four blocks at a time. It’s a very unique mechanic that takes a few levels to get accustomed to. But once you understand how the game works, the challenges will perfectly ramp up with excellent pacing. For more praise about Blocks That Matter, you can check out our review if you need further convincing. 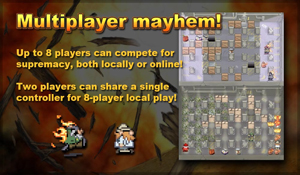 Explosive Gas is a clone of Bomberman with a twist. The twist is that there is two separate screens of action and players can warp between the two playable areas. Another great addition is the ability to run around while on fire when your character is killed allowing you 2-3 seconds to try to touch another player and light them on fire as a last act of revenge. This makes Explosive Gas twice as chaotic as a typical game of Bomberman, which makes it stand out as more than just another clone. The game includes up to eight player online and offline co-op and a full level editor. If you are a fan of the Bomberman series, then you might want to check this game out.