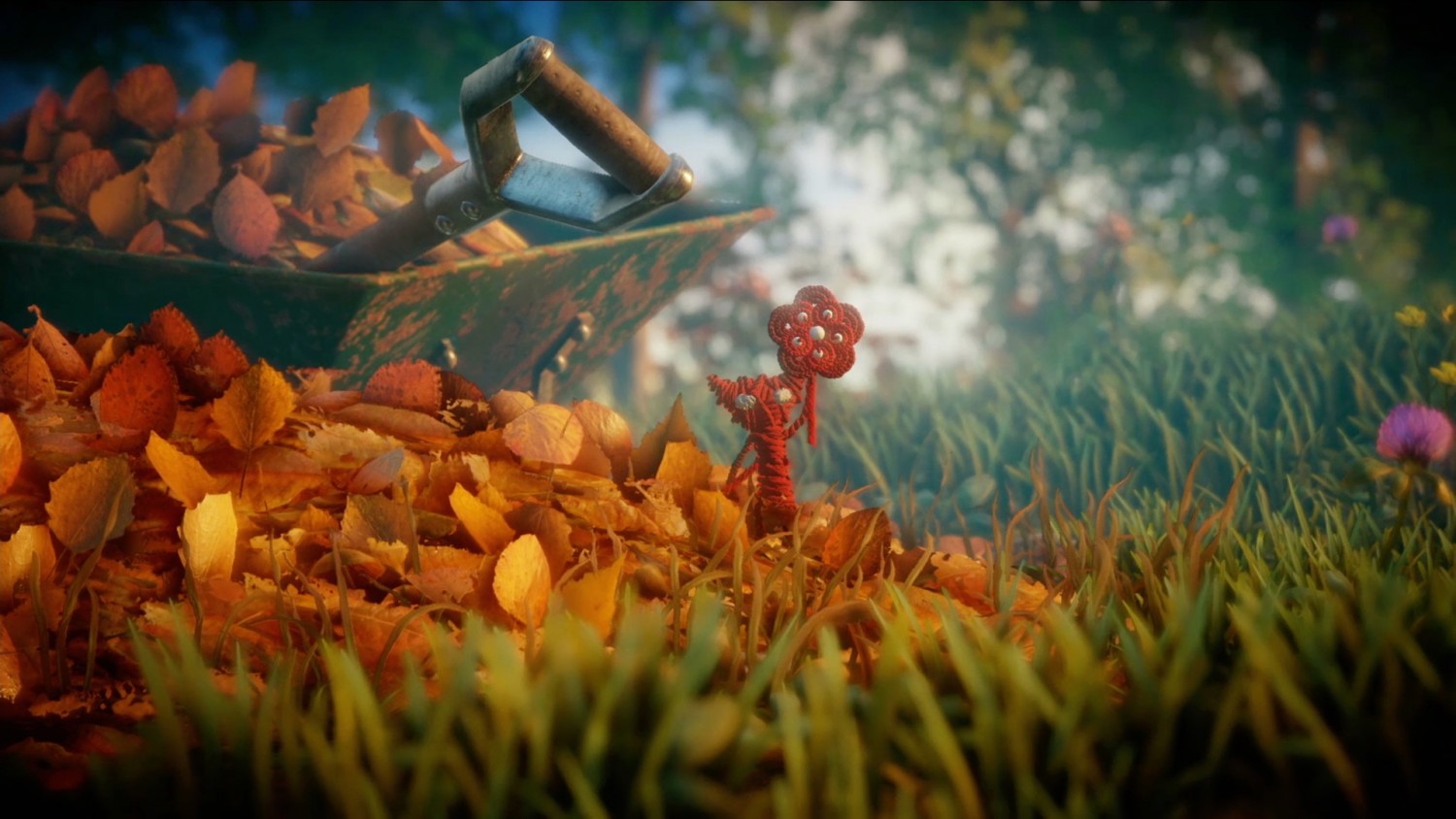 Unravel‘s unveiling at Electronic Arts’ E3 2015 media briefing made it the indie darling of the games industry’s biggest show. Coldwood Interactive’s puzzle-platformer may not have been able to live up to the massive hype that debut inspired regardless of how the final product turned out. Fortunately for Unravel, we don’t judge games based on how they stack up to fan, industry or media hype. Unfortunately, we do judge them based on how they play, and Coldwood’s first Xbox One release plays out about as exciting as unraveling an actual ball of yarn would be. Which is to say, not very much so at all.

Oh sure, the impression you’ll get as you watch those first strands of Yarny’s knitting unwind from his midsection and trail off behind him will undoubtedly be favorable. This is a game that is almost impossibly beautiful, its exquisite world being a feat of visual design so astounding as to inspire you to occasionally put the controller down for a moment and just marvel at its beauty; it certainly did for me. But part of what makes putting the controller down for a bit so tempting is the sad reality that the gameplay is so lacking. It would be unfair to say that Unravel is a game completely free of moments of entertaining and lively gameplay. But that’s just the problem — they are mere moments, and they are sprinkled far too conservatively amid the game’s otherwise monotonous and frustrating cadence. 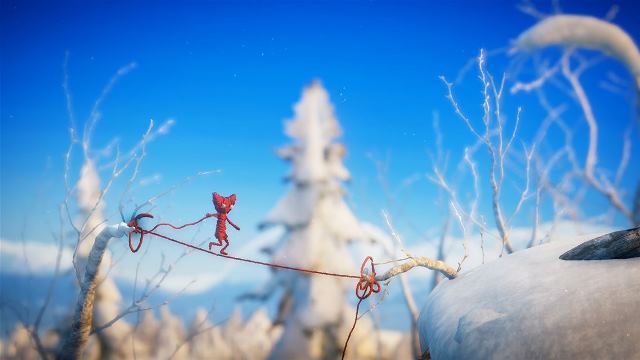 In all things, beauty — There is a vision of Yarny I keep going back to that makes the game seem more charming than it actually is. Emerging from waist-high snow, his red, fuzzy little body is half-covered in perfectly white powder, making him almost like a piece of Frosted Mini-StringTM cereal. It’s the smallest of details, but it never ceased to evoke a smile. Unravel is beautiful, and for more reasons than just a cold and soggy Yarny, of course. Verdant forests in spring bloom are a close second to the game’s winter wonderlands full of snow-covered treetops and acorns that roll into fluffy snowballs bigger than Yarny. Even more impressive are environments like a rainy toxic waste dump and a rusted-out junkyard. Under normal circumstances, these locales would surely be ugly or even disgusting, but Coldwood’s artists have magically applied a sort of grimy glamour that somehow makes you yearn to be surrounded by dead husks of cars or barrels of chemical sludge.

Set bits — Many AAA blockbusters rely on a handful of amazing set pieces to leave players feeling wowed by their worlds and the action sequences that take place within them. Yarny could fit in the palm of your hand, so having him scramble up an entire train dangling precariously over the edge of a giant cliff wasn’t going to work. Instead, the little guy gets bits of set that appear nearly as imposing and impressive as their AAA brethren thanks to the player viewing things from Yarny’s perspective. You might run right by a motorboat or old sedan were this one of the many other games in EA’s publishing portfolio. But being a diminutive string creature means you’re going to have to solve a puzzle around a series of knots to tie and strings to pull when you encounter bits of scenery like these, and doing so can be a lot of fun. 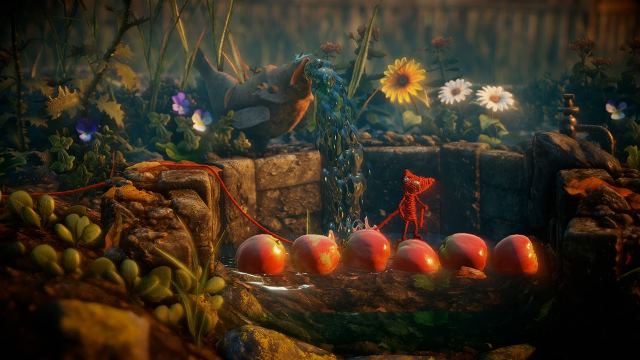 Wake me when it’s over — The vast majority of Yarny’s adventure is far less interesting than starting and captaining a motorboat. You’ll often find yourself stuck on tedious knot puzzles. Coldwood occasionally makes these puzzles interesting, but most of the time it just makes them annoying impediments to your progress. You’ll find yourself repeatedly tying and untying the same knots and climbing and swinging from the same points as you struggle to deduce just what the heck it is you’re supposed to be doing. Players are given just enough string to get from one checkpoint to the next, meaning you must use it in the exact right way at all times. Fail to do so, and Yarny will run out of yarn to unravel, leaving you stuck and forced to backtrack, untying and retying all those knots. It’s not much fun the first few times, and it’s far less so the umpteenth time. Being as this is the core of the Unravel experience, that’s a serious problem, and one that had me nodding off on several occasions.

Stop me before I break something — Yarny resides in a perilous world requiring the exaggerated and pinpoint-accurate platforming of a Super Mario. Instead, he has the plodding, weighted movements of a Sackboy. Puzzle-like series of platforms requiring knots be tied and/or strings be swung or flung from at precisely the right spot to allow Yarny to just barely make it to safety. Mess it up, and you will mess it up, and you’re dead. Worse, the controls often felt as though they weren’t even as responsive as Yarny’s rules of movement lead you to believe they should be. One area, in particular, resulted in repeated deaths because Yarny was not climbing atop the string bridge I’d made no matter how hard I pushed up on the analog stick. This caused me to continually fall to my death when it seemed as though I should have been easily climbing atop the string bridge and being right on my way. There also seem to be sections of the game, like one featuring lightning striking electrical wires, that were designed with the express purpose of pissing off the player. If so, mission accomplished. 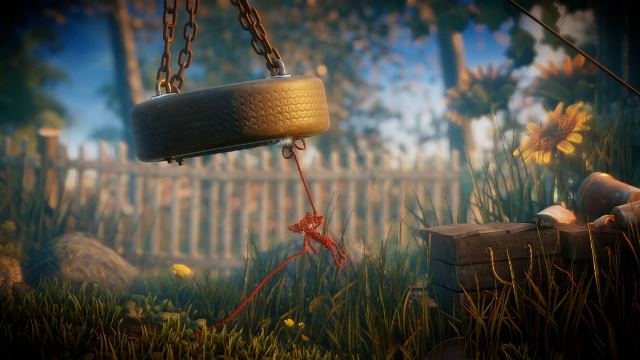 A yarn not spun — Creative Director Martin Sahlin has said he and his team “love” Unravel‘s story, and there’s no reason not to believe that. But there’s little reason to believe you’ll hold this story as closely to your heart as Coldwood does. That’s mostly because it’s not really in the game. Coldwood is trying to spin some sort of yarn about growing up and moving on and losing something or someone. These are extremely relatable themes for anyone, and yet I left Unravel feeling ambivalent about its narrative, which is told through the time-honored tradition of finding trinkets in the game world that unveil words and pictures to make up a backstory. The story is too threadbare (sorry, couldn’t help myself) to be of interest to anyone but its teller. If you can’t fully invest yourself in either a game’s story or its gameplay, no amount of pretty moving pictures can make up for it.

Come for the sights, not for the sounds — Unravel‘s sound is sadly unable to live up to the beauty of its visuals. Most of the music is just sort of there; it’s not remotely memorable or enjoyable, but it’s not awful either. There are a few tracks, that will have you reaching for the mute button, but the biggest offender is a single sound effect that is nothing short of infuriating. It’s not that the sound recording is of poor quality or that it doesn’t sound like the thing it portends to be. Quite the contrary, it perfectly mimics the sound of mosquitoes buzzing around your head. These little SOBs swarm around Yarny for the majority of what proves the most aggravating level in the game, only momentarily easing their otherwise non-stop assault on your aural senses when repeatedly flicked by your yarn. It’s just one sound in just one level — and the remainder of the game’s sound design is just fine — but it is excruciating while it lasts, which is far too long. 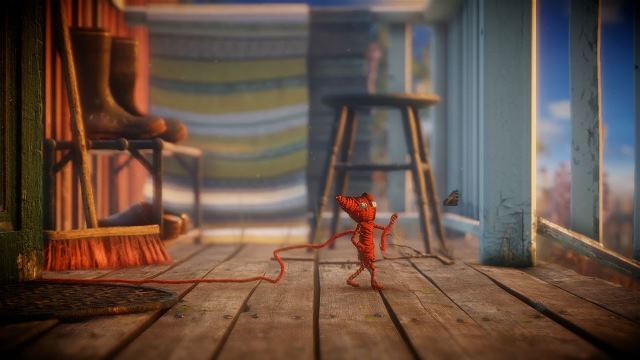 In a way, Unravel doesn’t just deliver on its E3 promise, it exceeds it. Yarny and the world he explores may just be the most visually pleasing things to grace the Xbox One to date. As a passion project for Coldwood Interactive, Unravel is a success: it is a thing of beauty and an original concept from a developer and a publisher long mired in franchise work. But there are far too many superior indie puzzle-platformers on the market to recommend Yarny’s occasionally enjoyable but mostly sleepy and frustrating adventure.

Unravel was developed by Coldwood Interactive and published by Electronic Arts. It released on February 9, 2016. A copy was provided by EA for review purposes.