Tembo the Badass Elephant preview: The love child of Rambi and Rambo

Tembo the Badass Elephant preview: The love child of Rambi and Rambo

If you don’t immediately think of busting through walls as Rambi in Donkey Kong Country (DKC) when you see someone playing Tembo the Badass Elephant, then you clearly were not a child of the ‘90s (and probably not someone I would want to be friends with… but that’s beside the point). Game Freak’s 2D side-scroller is pretty much one entire game devoted to Rambi with a little Sonic, Yoshi and other classic video game character influences mixed in for good measure. And you know what? I am totally OK with this.

Remember Rambo’s iconic red bandana? Really, what does that bandana do? I have no idea, but when you see it you instantly think of Rambo. Take a look at Tembo and you’ll realize the pachyderm is also rocking this trademark red headpiece. That’s because the game was inspired by ‘80s action films such as Rambo in both its art style and gameplay. Just like in these movies you will have to blast through the streets and rescue imprisoned civilians, all while battling the evil villain Phantom’s tanks, war machines and infantry. 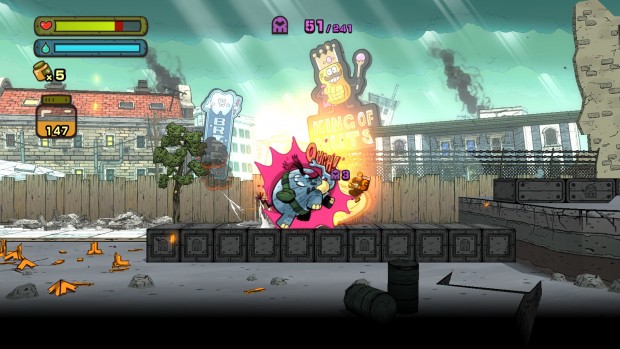 As a kid playing Donkey Kong Country I wished that Rambi could be in more levels. With the creation of Tembo, it appears that my wish has been granted. Just like Rambi, Tembo charges through walls, blocks, boxes and enemies to get to the end of each level. He even shoots out of cannons, similar to how DKC shot players out of barrels.

You don’t get called “badass” for just having some simple moves, though, so Game Freak has given Tembo some serious upgrades over the original Rambi. He can ground pound, uppercut and do a flutter-type jump reminiscent of Yoshi’s signature move. Of course, since you’re an elephant, you also shoot water out of your trunk to put out fires blocking your path. All these skills are available to you from the beginning of the game, so there are no unlocks along the way. 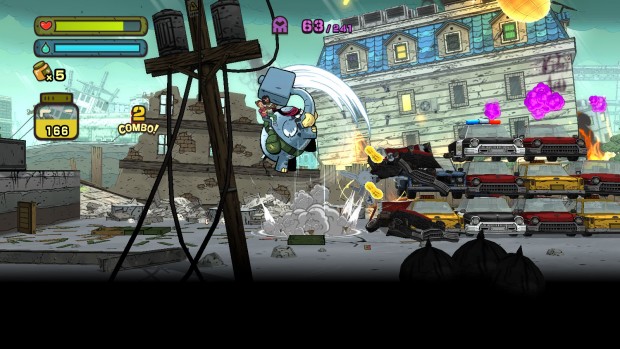 Of course, no elephant game would be complete without peanuts. Similar to Sonic’s rings or Mario’s coins, Tembo has peanuts to collect, and once you reach 300 peanuts you’ll earn an extra life. Each level contains one super peanut that will earn you 50 peanuts if you find it.

When it releases this summer on Xbox One, Tembo the Badass Elephant will feature 17 levels full of box-bashing, peanut-collecting and boss fights, all of which will come complete with cheesy ‘80s overtones. 10 years ago
What we are playing

Read More
What we are playing: Week of May 22nd
Top