If you’re reading this, you don’t understand. You can’t understand. I can’t either, of course. I’m not blind. Beyond Eyes‘ Rae is, and that must make life terrifying and confusing, doubly so when the game takes her outside of the familiar confines of her home. 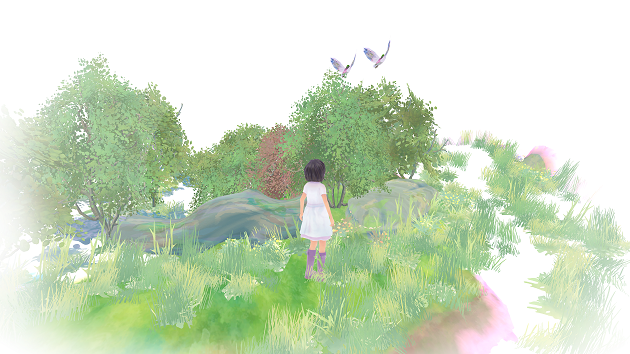 Rae, who is 10 years old in Beyond Eyes, lost her eyesight when she was just a toddler due to a fireworks accident. Agoraphobic and phonophobic as a result of the accident, the girl has lived a sheltered life and rarely left her home since. But when her cat Nani goes missing, she has to overcome her fears and head into the great outdoors.

Though everyone can sympathize with the idea of being blind, most cannot empathize with it. Sure, you could close your eyes or put on a blindfold for a bit, but being permanently blind just isn’t something you can simulate in real life. You can always open your eyes or shed a blindfold; you’ll never know what it’s like to have your unobstructed eyes wide open but not see the light your brain processes as vision.

Beyond Eyes does its best to overcome that and to simulate a complete lack of vision through, perhaps a bit ironically, the use of limited sight. You’re only able to see a few steps in front of you at any given time, so what’s beyond that is a great mystery represented by empty white space. Even when you can see things, those things may, upon closer inspection, turn out to not actually be what you’re seeing.

As a blind person, Rae must rely on her other senses to make educated guesses about how the world around her looks. Most of the time those guesses are right, and what looks like a fence, for example, turns out to indeed be a fence. Other times, however, Rae’s senses may deceive her. At one point during the E3 demo XBLA Fans played through this week, the sound of flowing water in the distance paints a picture of a pleasant fountain. Approach the “fountain,” though, and you’ll discover that it was just a mirage created by Rae’s brain based on the limited stimuli her senses give it to work with. The fountain is actually a leaking sewage pipe. Gross.

Other times when the world around Rae draws in you’ll discover that it’s exactly the way her senses made it out to be. It takes excellent audio work to pull this off, and Beyond Eyes has just that. Pristine sounds of birds chirping playing through headphones guided me straight to the birds’ location, which usually seemed to be in the same direction Rae needed to go in order to make progress toward the end of the level.

But because of her fear of loud noises, some birds are frightening to the young girl. The shrill squawk of crows so terrifies her that she covers her ears and refuses to move close to them, which forced me to find another route during my play session. Taking other routes can sometimes feel a bit tedious due the incredibly slow pace at which Rae walks, but it makes sense within the game world. Of course a blind, introverted little girl would walk slowly and purposefully with every step. 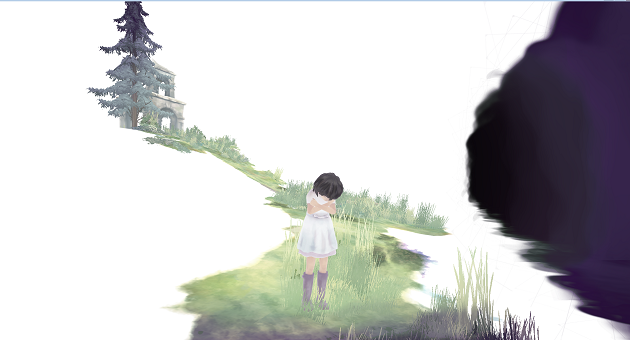 Dirt paths ran throughout the sole level on display, naturally informing the player of which way is the way forward, but it was frequently possible to color the world outside the lines, and the temptation to do so is hard to ignore. Giving in to that temptation, however, led to me having to ask the game’s designer, Sherida Halatoe, for a bit of direction back toward the path near the end of the level.

With her help I plodded toward a huge dark cloud obscuring everything beyond it. Approaching the cloud revealed a traffic light with a pedestrian crossing button, and pressing that button caused part of the cloud to open up like the Red Sea, giving way to a busy street and the end of the level.

I wasn’t able to see what else was out there, but I can’t wait to hear it.