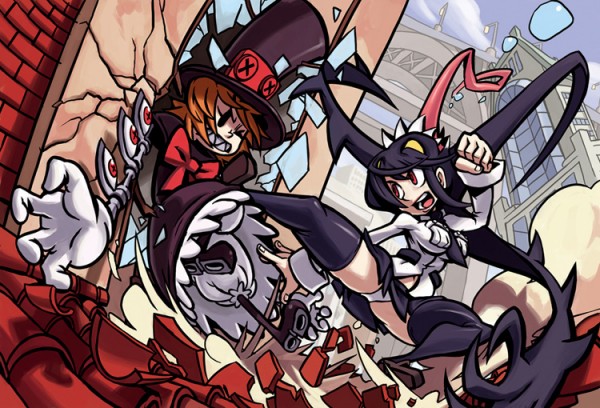 Mrs. Victoria’s tutorials – The tutorials actually teach not only Skullgirls but the whole of fighting games. The basics are covered thoroughly, with the beginner tutorials explaining how Skullgirls works. Blocking, special moves, “Blockbuster” (super) and “Ensemble” (team and assist) moves are all explained and the player is challenged to prove that they understand. Chapter 2, the intermediate tutorials, lay into the nitty gritty of fighting games dropping terms likes “mix-up” offense and defense, punishing and hit confirmation. These are all middle-tier concepts, the understanding of which are necessary to competency in any fighting game, let alone Skullgirls. The final sets explain combos and outline what is possible in Skullgirls.

While players don’t have to do the tutorial, we thoroughly suggest anyone who has only played very few or no fighting games, or only 3D fighting games, completely finish the tutorial. It’s helpful, it’s thorough, and completing each lesson gives you a firm idea of the concept in question. We used to say RTFM, but in this case, it’s CTFT. Complete the f… well the tutorial.

Depth of character – Skullgirls may have only eight characters, but each of them are incredibly unique. The amount of polish that’s gone into each character, the attention to detail in design and in gameplay, all of it is just ridiculously thorough. Most of the Skullgirls cast is built around a certain playstyle like rushdown (Ms. Fortune, Filia), grapple (Cerebella), or zoning (Parasoul, Peacock). From there, some sort of interesting idea or gameplay mechanic works its way in, like Ms. Fortune’s ability to dislodge her head or Double’s utilization of other characters’ discarded moves.

The normal attacks, special moves, supers and difference in handling are vividly present; no character feels the same. Beyond that, they all look really different. They’re different sizes, have different themes, and some aren’t even human! 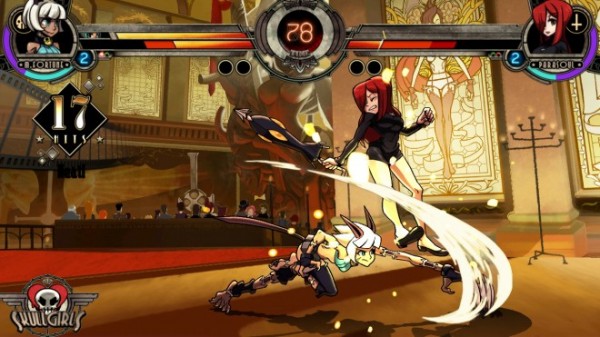 The Skullgirls engine – The engine created for Skullgirls by Marvel vs. Capcom 2 and BlazBlue veteran Mike “Z” Zaimont is fine tuned to the sharpest of… tunes. For fighting game vets, Skullgirls is really, really easy to get into. The combat is quick, recovery time is short and attacks fly out at a breakneck pace. The back and forth is palpable, and as health bars drop you’ll feel your hands tighten up, every combo getting more and more important.

Unlike many other games with juggling combos, the amount of health you have and recovery that can be accomplished makes for multiple combo opportunities. Team sizes vary and don’t have to be matched, so one player can pick to go solo and one can be pick a team of three, and the game will be balanced accordingly. While it can be daunting for one character to take on three, it’s still an even match both in terms of damage an health. The engine for this game is simply on another level of polish and frenetic fun, especially for 2D fighting game enthusiasts.

60 frames and hand drawn – Maaaaan is this game good looking! Somehow, through some sheer force of will and love for all things artistic, Reverge Labs has managed to hand-draw every single frame of animation; that means no sprites. Each character is beautiful and flawlessly animated. Characters of different themes are accompanied appropriately in the animation. For instance, Painwheel’s moves thoroughly look like they hurt her, and Peacock’s whimsical fantasy style violence hearkens back to old-timey Disney cartoons. To top it off, all the various stages are deep and full of background elements, some of which have strange character in the back, all of which pop visually. 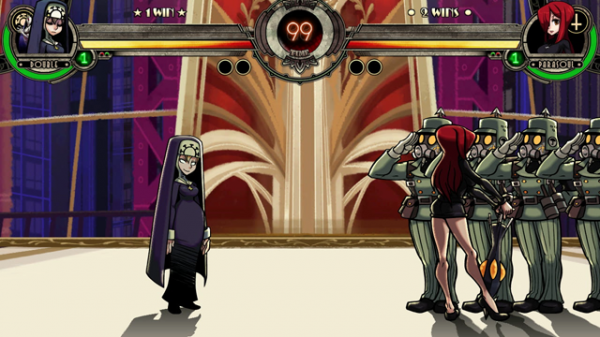 The final boss – For all the talk of avoiding the trappings of the past twenty years’ worth of fighting games, Reverge sure did put one of the most irritating and infuriating pieces of fighting game history into their game: the boss fight. Without spoiling anything, let’s just say this boss has all the trappings of super freaking annoying fighting game bosses. It’s not a playable character, for one, so isn’t subject to normal balance procedures most likely. It’s three-tiers and the transformations actually do massive damage to you if you get caught. And lastly, projectile spam! The spam! THE SPAM! It’s difficult to overstate how frustrating this boss is. At least it’s not part of the main course (the versus).

Quarter circle… what? – Why is there no command list? The training mode, sparring mode, tutorials and such are all awesome, very useful things, but… why is there no command list? The fact that there’s some gallery stuff missing from the extras shows evidence of a bit of a last-second rush. The main menu has a message telling players to check the Skullgirls website for move full move lists (it’s a rather nice PDF, actually), but it’s just not the same. Hopefully this gets patched in. 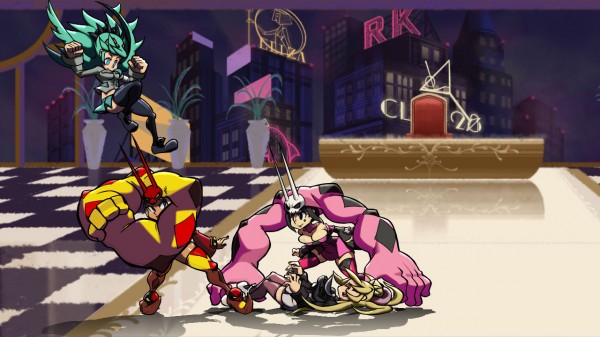 Fighting games are all over the place, but there really aren’t many new ones fighting each other to release, especially not on XBLA. Skullgirls thankfully is a fighting game lathered in polish, despite not matching the bloated rosters of some retail fighting games. The modest eight character cast of Skullgirls is very thoroughly defined and warrants hours and hours of play before mastery. Beyond that, the variable team sizes means you can have your favorite solo character, or your favorite team of three or two or just love the whole set!

Skullgirls fails to dodge all the fighting game frustrations, but it gets the closest to truly providing a fresh fighting game experience, especially in recent years. The game is almost worth it just for the tutorial, which all those wishing to learn fighting games should complete. Yeah, the final boss might be absolute crap, but in the grand scheme of things you’ll only have to fight her a few times (more if you want all the color palettes) so it’s not too big of a deal. If you like fighting games but aren’t sure what the next game to pick up is, make Skullgirls your next purchase.