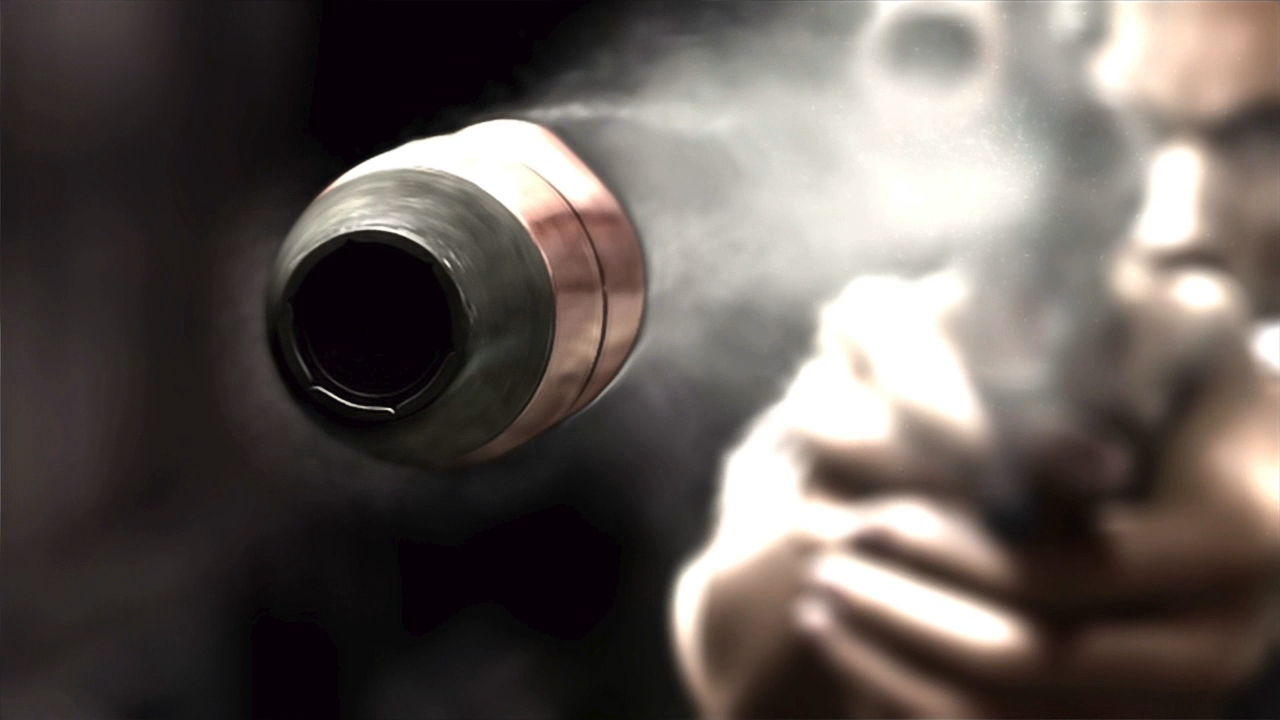 The Resident Evil series has seen many iterations over the past twenty years. Some of the earlier titles were released on consoles that are obsolete that many of us don’t have anymore. A few days shy of a full year ago, Resident Evil was remastered and released for Xbox One and Xbox 360. Having the opportunity to finally play the game that started it all, I was pleasantly surprised to hear that Resident Evil 0 was also being brought to Xbox One and Xbox 360. The time has finally arrived to experience the journey of Rebecca before her time in the Spencer mansion. 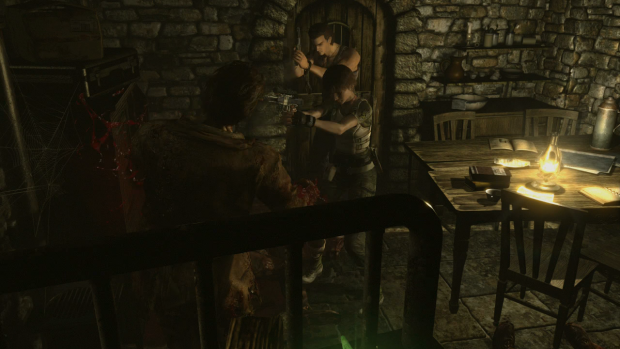 Well done remaster — The graphics and sounds have been updated for modern times — rather well, in fact. There were no noticeable slowdowns or input issues, and there were no instances of getting snagged on the environment. I don’t typically like remastered games, but if I had to count on a company to actually touch up their games properly and with care, it’s Capcom.

Compliments about a game from 2002 — Everything has been set in stone a long time ago, so there isn’t much I can say that isn’t just commenting on history. That being said, I’m going to mention the parts of the game I liked the most.

Likable protagonists — Billy and Rebecca are the kind of protagonists I like to see. They both ooze a sense of inner strength and determination without having to display it to the audience every five minutes. Billy doesn’t have to punch a boulder to display his physical strength. Rebecca doesn’t have to remind us that they’re partners. Capcom was willing to take a risk back then, and made it so that Rebecca still has her own character flaws. She isn’t very good with the piano, and she isn’t strong enough to push some heavy objects. Rebecca and Billy also have their own specialties that the other character can’t do. While this can be a nuisance at times, it’s better than being carbon copies of each other. Great environments — While I can’t say I’m a fan of how many different environments this game takes place in, the atmosphere itself is very creepy. From the leech eggs, to the blood splatters and rusted look, there is always a feeling that something sinister is lurking in the background. The payoff to the sinister feel is very mixed though, and will vary from person to person.

Leech Hunter mini-game — Other than having a silly name, I found this mode to be quite enjoyable. It’s an item hunt of up to 100 leech charms that takes place inside the Umbrella training facility, which is filled with many monsters. The rewards for completing the mini-game are very beneficial including a top prize of infinite ammo. Weapons and ammunition in this mode are plentiful, but hidden and scattered. Players will have to plan out which rooms to visits, what to carry and what to use. It reminds me of my time spent playing Resident Evil Outbreak: File 2 with friends playing the three Elimination levels. The main difference is Leech Hunter doesn’t have a time limit. It’s a great mode for those that want to fight enemies without dealing with the puzzle elements of the game.

Wesker mode — Having unrealistic expectations of Wesker mode, I felt that it fell short of its potential as an over-the-top experience. Wesker has death stare and his shadow dash for special powers. The death stare feels very out of place, as Wesker has never fired lasers from his eyes before. Disappointment set aside, it’s nice that this is available in Resident Evil 0, as I wouldn’t recommend it as a standalone DLC add-on. Battle Suit Rebecca looks amazingly stylish, especially with the glowing red eyes. I would go out on a limb and say Battle Suit Rebecca looks better than Battle Suit Jill from Resident Evil 5. While cutscenes still have Billy voices coming from a Wesker stand-in, Capcom has brought in Wesker’s voice actor to authenticate the actual in-game sounds. Wesker Mode is a nice way to replay the game again. 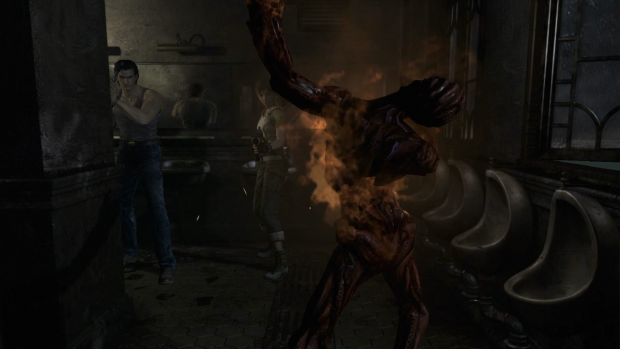 Complaints about a game from 2002 — Other than one short instance where the voices played before the subtitles could catch up, remastering efforts have been spot-on and I have nothing negative to say about that aspect. So all that’s left is to talk about are problems for a game made in 2002, which is expected due to hardware limitations and general game design theories at that time. I end up saying a lot, but all of these issues below are very minor.

Switchable players — I actually like this idea, but I find the execution isn’t as strong as it should be. Switching between teammates feels clumsy, as there is a second delay between each change. As such, it becomes a bit of a chore having to do some puzzles or picking up specific items as it feels like an eternity going back and forth between each character.

Inventory space — Having six inventory spaces for each character is great. Having major items like the hookshot key item, the shotgun, or the grenade launcher take up two inventory slots is terrible. Gone is the cheesy idea that a coin and a shotgun can take up the same amount of space in the Resident Evil universe. If a characters takes a major weapon and its corresponding ammo, then they are left with three slots. Now factor in heals, key items, and stronger monsters and suddenly there isn’t much room to work with at all.

The non-spooky big baddies — Bosses fall short in memorability compared to its predecessor. While Resident Evil did a fantastic job in introducing its bosses as imminent looming threats before their fateful encounters, Resident Evil 0 simply surprises the player with a boss fight. Resident Evil 0 bosses are not very threatening either except for the final boss, and their look reminds me more of bosses from SEGA’s House of the Dead series. For a specific example, while trying to bring back the success of the Yawn boss fight from Resident Evil, the Centurion boss is an ineffective replica with its wide open room and very telegraphed movements and attacks. 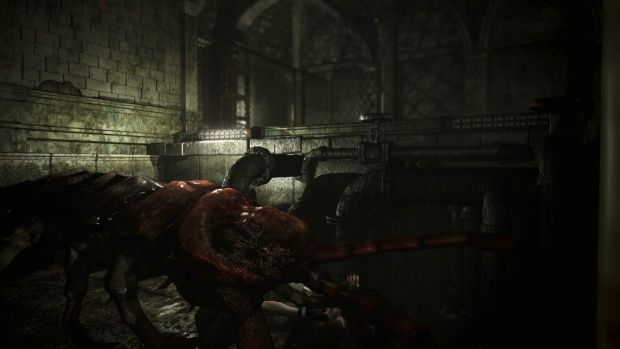 Action packed — While some people aren’t a fan of avoiding enemies and would prefer to deal with most enemies head-on Resident Evil has always given people non-lethal ways to avoid situations. Resident Evil 0 entangles players in very small rooms and hallways while populating these rooms with monsters. As such, many of them need to be dealt with more forcefully. This is great for those looking for more action, for the 1% out there, it does make it very difficult to do specialty runs such as knife only.

Memorability — Heavily inspired by Resident Evil, Resident Evil 0 tries to simulate many of the good features while leaving out the bad features. Unfortunately, it’s a little too similar to its predecessor in every way and not for the better, which will always make it seem inferior. Oddly enough, I still like this game more than most of the games I played in 2015.

Duration — In modern standards, this game is very short. Playthroughs are about two to four hours, and maybe more if its a first playthrough. The play time sits in an odd location where it feels too long for a one sitting game, but too short for a multiple sitting game. Some parts of the game drag-on, and one could wonder if the game could be condensed a little bit. Despite my lengthy likes and dislikes for this game, my opinion of its worth is very simple. If you have not played Resident Evil yet, play that first. Resident Evil 0 tries to emulate many of the qualities of the first title and does it less effectively. If you have played Resident Evil, get this game. You won’t regret it. It’s filled with many minor gameplay flaws, but holds up better in modern times than the time period it was released for. It’s a solid title for a great price.

Achievement Notes: While daunting at first, the Achievement list is fairly simple. It’ll require multiple playthroughs of the game, but most of them can be done on easy difficulty. If that isn’t enough, perform well enough on the Leech Hunter mini-game (which also has Achievements), and you can unlock infinite ammo for your save as well. The disappointing aspect is that special unlocks are only applied to that save, meaning you can’t get infinite ammo on easy and use it to stomp on Hard difficulty.

Resident Evil 0 was developed and published by Capcom on Xbox One. It was released on January 19, 2016 for $19.99. A copy was provided by Capcom for review purposes. 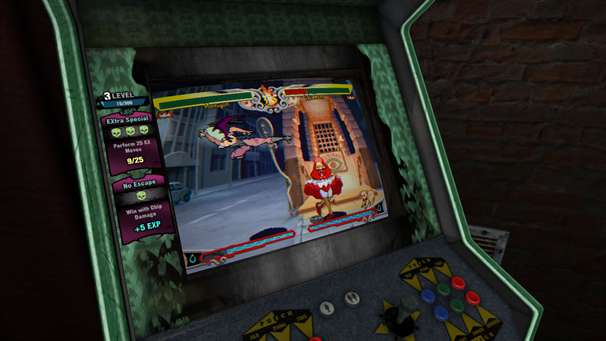