Science Fiction has always been one of my favorite genres in media. When I saw Planet Alpha screenshots, I was instantly intrigued, having grown up playing mostly platformers. Planet Alpha seemed like it would be something I needed to try out. The closest of the genre I can compare this to is Inside and Abe’s Odyssey. Maybe a combined version of the two. While you can’t directly kill the enemies, you can use traps or night/day shifting to make time work against them. While only really able to move left or right, the perspective and interaction within three dimensions are still present. The game is fairly short, and you’re able to complete it within a sitting if you decided to do so. You’ll constantly be dying, but there are checkpoints everywhere. You can keep failing, but will usually be placed right before the area you failed in. It’s mostly easy, but at the same time avoids being a pushover. Some spots can be very difficult because you aren’t sure what to do or how to avoid certain enemies. There is a weak plot, but I wasn’t sure if I didn’t like it because there wasn’t one, or because I didn’t get it. Time to “jump” to what I liked most. 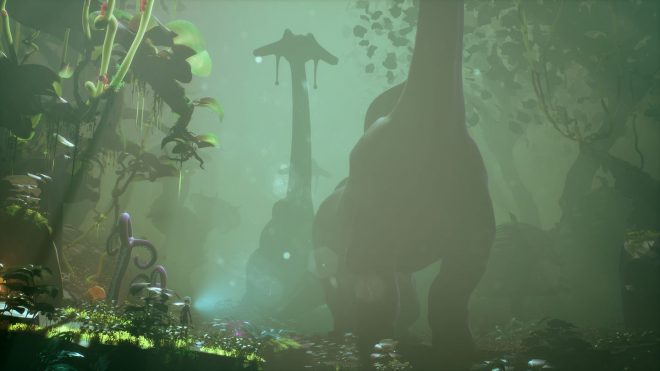 The Planet— From the start, you’ll realize you’re on a beautiful planet that’s extremely dangerous. Besides a lush environment filled with extraordinary wildlife, there are also mean robots that shoot at you with lasers. You’ll feel very small on this planet. The huge almost dinosaur looking creatures are mostly in the background but do interact with you somewhat (in good and bad ways). They can destroy your robot foes, or you if you get in their way. It’s like you’re in the middle of a war at times, where you’re just trying to pass through while death surrounds you. I also love how much depth there is with the landscape. Even though you’re in a side-scrolling game, the world often gets in your line of sight. This can help with enemies trying to get you and adds a bit of problem-solving to use your surroundings to block the view of enemies or even their attacks. I admire the creative use of science fiction. 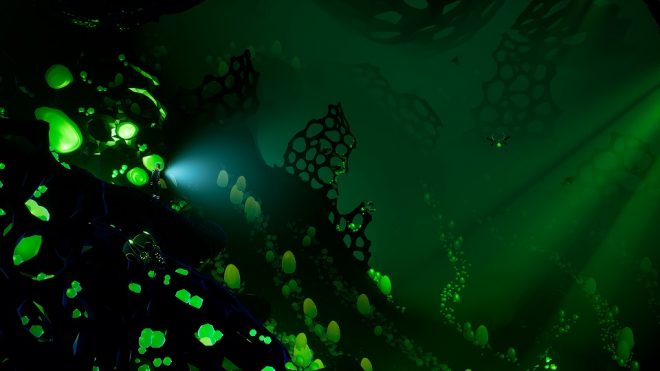 Time Shifting — You’re able to shift time from day to night. It adds a lot more thought and flavor which puts a nice shine to the chapters. There are quite a few times that you will need to adjust the time of day. You can make mushrooms grow to jump onto, or exotic plants to raise from the ground to help you conceal yourself from the robotic enemies. There is a use of it for certain puzzles too, allowing you to align certain things from the solar system. It really brought the environment to life.

Movement— Accuracy can be difficult for a platformer to get right. Alpha Planet has done it right. The movement is excellent. Times I thought maybe I wouldn’t make a jump; I did, barely hanging on for life and then pulling myself up again. The best use of jumping is within the other dimension after going through a portal (at least I think it’s another dimension). The physics are impressive and fun. Many games fail to make jumping with low gravity feel good. It’s hard to describe how well done it is in Planet Alpha, you really just have to try it to understand how well they nailed it. The momentum from a moving block that propels you forward in a high velocity is perfection. Being Blocked— Unfortunately, not everything seems to have been done well with the physics. There are times an enemy moves to a spot they can’t attack you, but you can’t progress through them. At that point you just want to die, trying everything to push them or let them hit you. It’s very annoying when this happens. I wish I could say this only happened once. Besides enemies, sometimes moving objects that allow you to jump on them actually get stuck. You can’t move them in either direction if this happens. There is no quick reload checkpoint option, so you’ll have to exit or get yourself killed in order to restart. It stood out to me as being a glitch, but the programming of the enemies stopping in certain areas seems to be the real issue.

No Climax — No narrative exists, and you find yourself moving from checkpoint to checkpoint without much explanation of what is going on. You have somewhat of an idea, but after you finish the game, you might not feel like anything really happened. There is also no climax, and each area could have been played in any order. The chapters seamlessly blend together, but they also offer no sense of progress. You can complete the game in one sitting. Even if the goal was to let the player create their own thoughts on the story in an artistic way of silence, then it was a missed goal. Gorgeous design quality, accurate controls and interesting use of shifting the time of day make Planet Alpha stand out amongst recent platform based games. It has quick load times, forgiving checkpoints and can actually be quite challenging in a lot of areas. It’s fairly short, but I believe the time spent is very enjoyable. I do wish there was a better soundtrack. At first, I thought there was no music at all, but I realized my volume was a little bit low. I didn’t really care for the music because I don’t feel it was exciting. It wasn’t bad, but it didn’t keep up with the action happening. Either way, it didn’t have any real weight on to how I felt about the game overall. While there is a little confusion with the story and no additional content beyond beating it, I believe the outcome of this title resulted in a pretty good experience.

Planet Alpha was published by Team 17 and developed by Planet Alpha ApS on Xbox One. It was released on September 4, 2018, for $19.99. A copy was provided by the publisher for review purposes.

Deadlight trailer shows us gameplay to save ourselves

Read More
Deadlight trailer shows us gameplay to save ourselves
Top