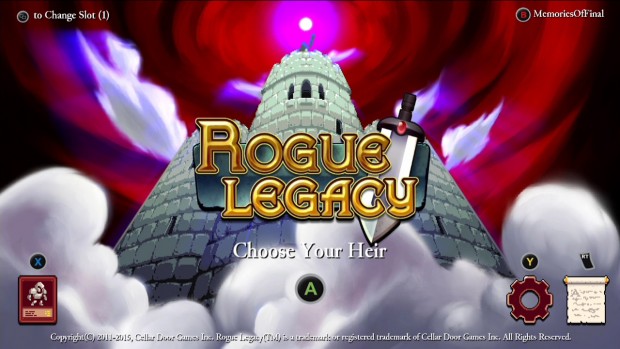 Have you thought to yourself that games have been too easy recently? If you answer yes, Rogue Legacy may be for you. Here is another throwback to the old school era featuring tough enemies with fair tells and many mean and sometimes unforgiving deaths. Levels are randomly generated with death undoing progress made by the player. Heralded as a “rogue-lite,” developer Cellar Door’s game undoes some of the frustrations of rogue-like games by letting players unlock skills and upgrade stats permanently. Many surprises are in-store for players, and you’ll never know what is around the next corner. Through trial and error, you’ll gradually grow stronger and wiser and eventually achieve success. Or not. Welcome to Rogue Legacy. 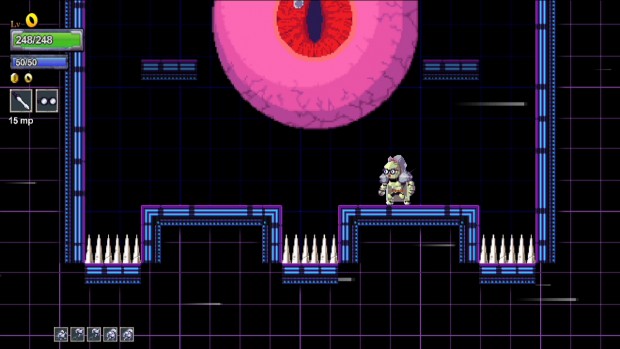 Rogue-lite — Rogue-like games can be very unforgiving. One mistake can wipe away a full game of progress with nothing to show for it since the player loses everything upon death. While keeping most rogue-like genre features, Rogue Legacy allows players to earn gold to upgrade after they die. Players may gradually grow stronger through their time in Castle Hamson. “May” is the keyword here, as any gold not spent before entering will be lost to the gatekeeper before retrying again. At first, all gold is lost, but through multiple steep upgrade costs, this percentage can be lowered to 50 percent. Another feature that tries to ease the rogue-like aspect is the Architect, which allows players to enter the previous castle layout for a cost of 40 percent of their gold on pickup during this current run. You could almost say the game isn’t a rogue-like when you take advantage of the Architect.

Upgrade system — The upgrade system is very detailed and expansive. At first, only a few things can be bought, but as more branches open up, more options become available, and the decorative manor background starts to grow concurrently with it. In this way, the manor becomes its own spectacle in the game. On the logistic side of things, each ability has a reason for existing, and the player is tasked with spending money wisely. Who wouldn’t want more health, armor or mana or a lowered mana cost? The spin is that every ability costs 10 gold more from its base price for every purchase. So expect to pay 150 extra gold than the original value if you’ve bought 15 other upgrades of the same type. It’s mean, but it’s also a nice touch on a game that features generations (every time a player-character dies, you restart as his offspring). As one more word of warning, maxing out upgrades takes a very long time, making the New Game+ playthrough more meaningful as enemies get harder and more money is required for upgrades.

Random references — Almost everything feels like a nod to something else. For example, the Barbarian King’s shout ability uses the phrase “Fus-Ro-Dah,” from the popular The Elder Scrolls V: Skyrim. The Shinobi/Hokage class character wears a Naruto-type headband as well as being the namesake of character types in that show. Your character stats are shown in the form of a Magic the Gathering card lookalike. I’d also like to believe the Lich King or Queen character ability called “Crow Storm” is another nod to the strange fascination/meme of the Storm Crow being a super powerful being in Magic the Gathering. In any case, Rogue Legacy features solid tributes without being invasive. Steep entry point — After a very calm and relaxing tutorial, players are left on their own in Castle Hamson. It doesn’t matter if it’s your first playthrough; you may very well get decimated on the first randomized room. Cellar Door Games could have done better in transitioning new players into the chaotic mix.

A bit too quirky – Cellar Door added a few too many optional annoyances that add no value to the game. Many fairy chests allow players only one try to obtain their contents or are blocked off in a way that requires another character to use the Architect on subsequent attempts. Many traits are a nuisance without actually hindering the player: Far-Sighted (blurry screen near your character), Near-Sighted (blurry screen away from your character) and Glaucoma (the entire screen is dark around your character). The Vertigo trait is equally as heinous — why would anyone want to play the game upside-down and mirrored? Rogue Legacy is great and difficult enough without these unnecessary distractions. 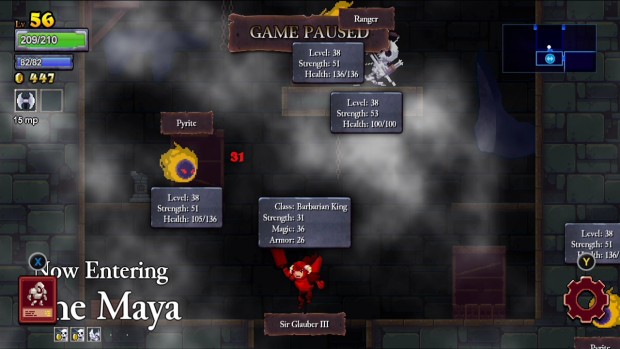 Prepare to die. A lot. Rogue Legacy is a tough game to recommend to the casual audience due to failure being a common occurrence. Much like From Software’s Dark Souls, players will find solace and joy in fighting that extra mile and finally persevering against a rough section. The game mechanics are well thought out and a joy to tinker with. If you like tough games, buy this one and you won’t regret it. If you want a peaceful way to spend a day, you might want to look elsewhere.

Achievement notes: The Achievements are somewhat difficult because the game itself is tough. Most are very straightforward, though, and lean toward exploration and progression. However, the remix bosses are fought using preset characters and may give players a run for their money. Thanatophobia is the major hurdle to completion, as players are tasked to compete the game on a fresh run with 15 or fewer deaths without using the Architect.