There isn’t a lot to say about Arkedo Studio’s upcoming game Hell Yeah! that you can’t tell just by looking at the name of the game. The art style, the crazy minigames, the twisted humor; all of that feeds into what is going to be without a doubt the most insane game ever to hit XBLA. Of course, this wouldn’t be much of a preview without talking a little bit about what we learned from the demo at PAX, so let’s get on with it!

First things first – the full name of the game is Hell Yeah! Wrath of the Dead Rabbit, which pretty much sums up the plot. You play as Ash, the Prince of Hell, a dead rabbit who is caught by paparazzi doing some rather obscene things with a rubber ducky. Naturally, this causes the whole of the underworld to lose what little respect they had for you, so in order to gain it back you have to kill, well, everything. Sound awesome? We thought so.

Hell Yeah! plays like a standard Metroidvania for about five minutes, and then things go completely, off the charts insane. You start off as a helpless bunny that basically dies if you are touched by anything sinister. This all changes as soon as you meet your ol’ pal Nestor (a zombie octopus, of course), who gives you a freaking jetpack with a chainsaw that completely encircles your body. Yeah, go pick your jaws off the floor. 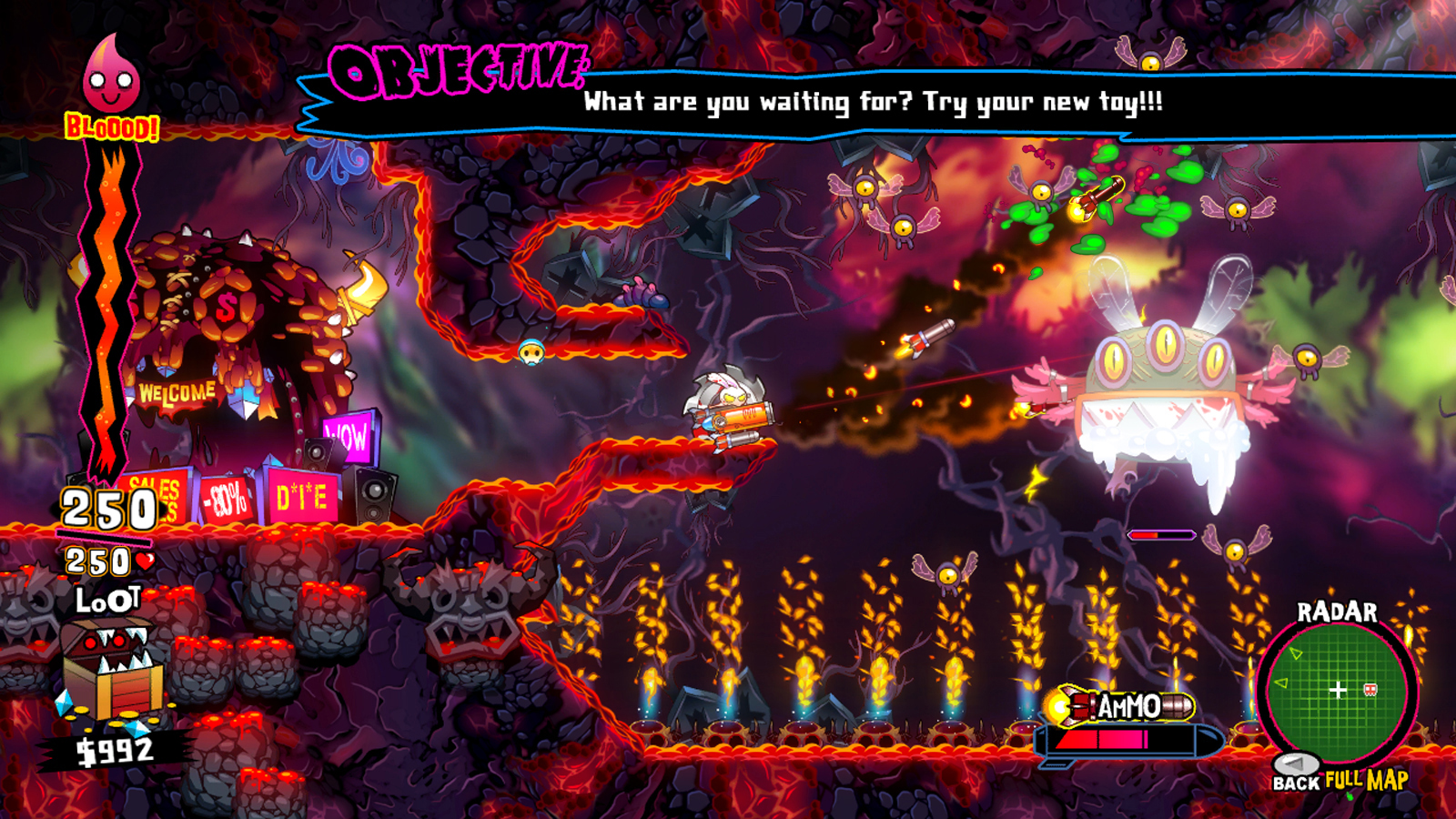 Here’s where things take an interesting turn. There are common enemies all over the place, but there are also over 100 unique, stronger enemies scattered throughout the game. Killing these crawlies launches you into a minigame, which can be anything from button mashing or timed presses to nonsensical trivia. I usually hate minigames, since they’re usually thrown into games to distract people from the rest of the mind-numbing gameplay, but these I actually enjoyed. They’re quick enough not to be a pain, varied enough to be interesting, and have enough of a payoff to be so, so worth it.

What do I mean by that? Well, failing to complete a minigame knocks you away from the enemy and returns a bit of their health, but succeeding launches you into a couple seconds of cutscene featuring some of the most extravagantly action-filled death sequences this side of a Michael Bay movie. For example, in one you turn into a rocket, shoot off the map, fly back, and explode the enemy into a fine bloody mist that covers 3/4 of the screen. In the one pictured below you’re turning some poor dude into a steak, which is by far one of the tamer ones. 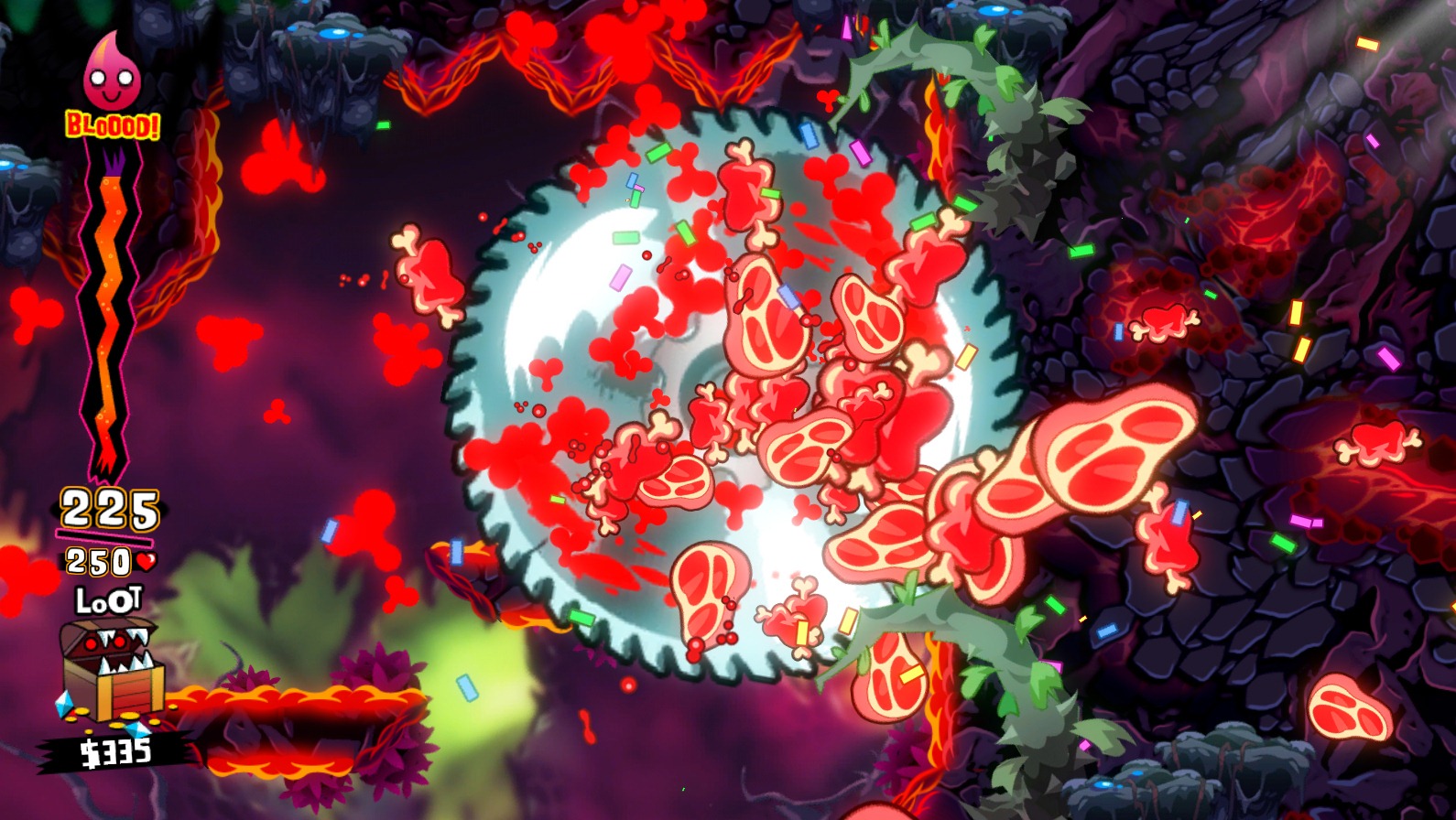 The world is filled with much more than enemies to kill though. Despite your awesome power you will get hurt, but you can recharge your life by visiting Madame Fontaine, who showers you with blood until you’re fully healed. There are also stores where you can buy new weapons, get upgrades, and unlock customizations for Ash. Jumping back to the monsters, as you kill them you will unlock them in sort of a Pokedex-type screen that fills you in on the often hilarious backstory of how they got to Hell.

All of this was enough to get us excited, but it’s still only the demo! Arkedo head Camille Guermonprez assures us that there will be more weapons, 35 different minigame styles that combine to form over 100 different minigames, larger bosses in addition to the unique monsters, secrets, easter eggs, and much, much more. You’ll also be able to customize your dear little prince with a combination of over 150 different masks, pets, and blades, giving each player their own little unique slice of the insanity that is Hell Yeah! All that’s left is to go out and get the game, which although was only finished the day before PAX will hopefully be available this summer.