Back in the days when men were men and XBLA was for arcade games, a beautiful little title called Geometry Wars 2 hit the marketplace. For many XBLA lovers it was the pinnacle of arcade-style gameplay, featuring six modes of score-attacking frenzy and leaderboards that to this day drive people back into the game’s depths to try and catch their friends. Unfortunately, as the production and development effort of XBLA titles increased, the platform has mostly moved on from games like Geometry Wars 2 – but there is hope. The launch of Kinect is bringing a whole new crowd of gamers into the fold, and developers are picking up the challenge in a big way, releasing amazing games like last year’s Fruit Ninja Kinect and (the reason we’re talking about this) the upcoming Wreckateer.

Wreckateer is a title that looks from a distance like it shouldn’t cause much of a stir. However, the second you see it in person you know it’s something special. The basic premise of the game is that you’re trying to destroy structures by launching things at them. Sound familiar? Even the folks at Iron Galaxy know that their game will draw comparisons to Angry Birds, but they’re fine with that. As they told us, Wreckateer is essentially a mash-up of the aforementioned pig crushing simulator, Boom Blox, and Burnout Crash, which to anyone keeping score means it is essentially a mash-up of some of the greatest quick-fix arcade games to come out in recent times. 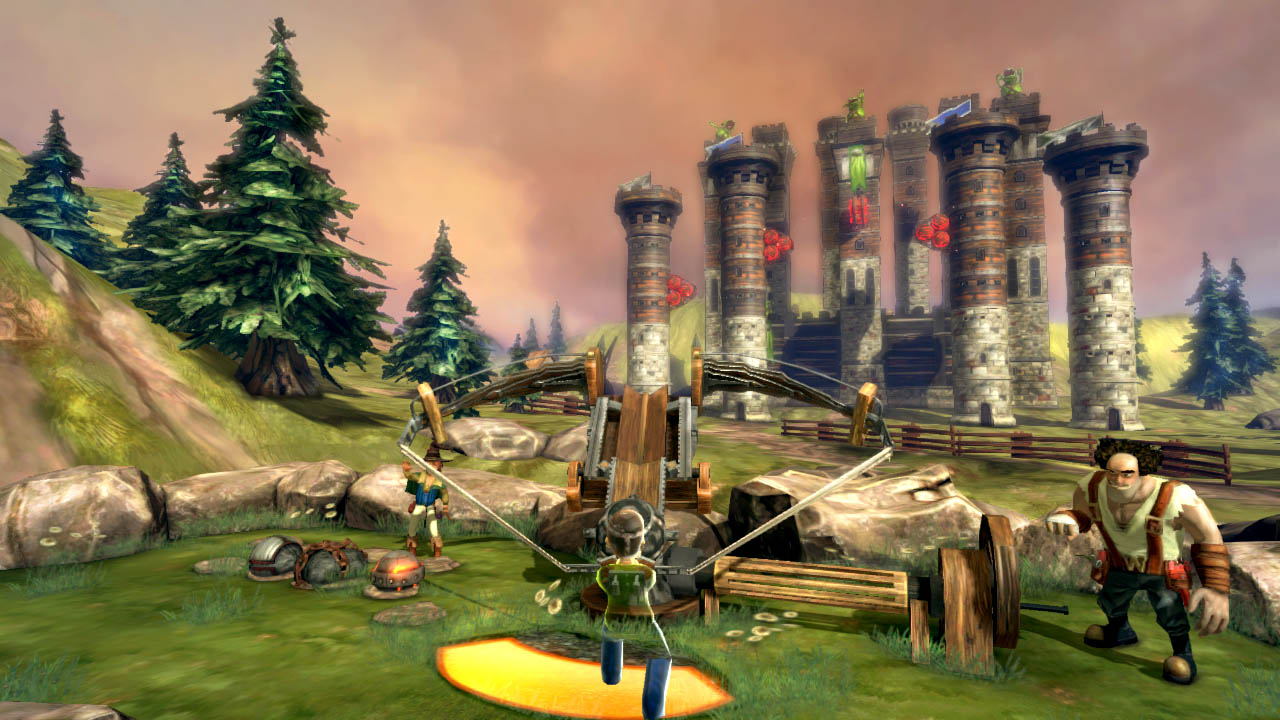 The gameplay of Wreckateer is deceptively simple at first glance. On each turn you’ll step up to your giant crossbow (virtually, of course), take a step back to get the desired power and angle, and then let fly. The game even highlights the score markers and buildings you’re peering through the sights at. Unfortunately, few things in life are so simple, and if you want to be any good at Wreckateer it’s going to take a lot more than just firing at the nearest tower.

First of all, releasing your shot is just the beginning. You can call your parents and let them know that those years of curling lessons they paid for weren’t a waste – Wreckateer lets you delicately guide your ball straight into your intended target by nudging it through the air as it flies. This is a skill you’ll need if you want to earn bonus points, which you get by doing stunt maneuvers like flying right next to a wall without hitting it or by crushing the orcs who populate the castles. You’ll also have access to one of six special shots on each level, including a flying ball that gives you the ability to use your arms as wings to guide it on home. 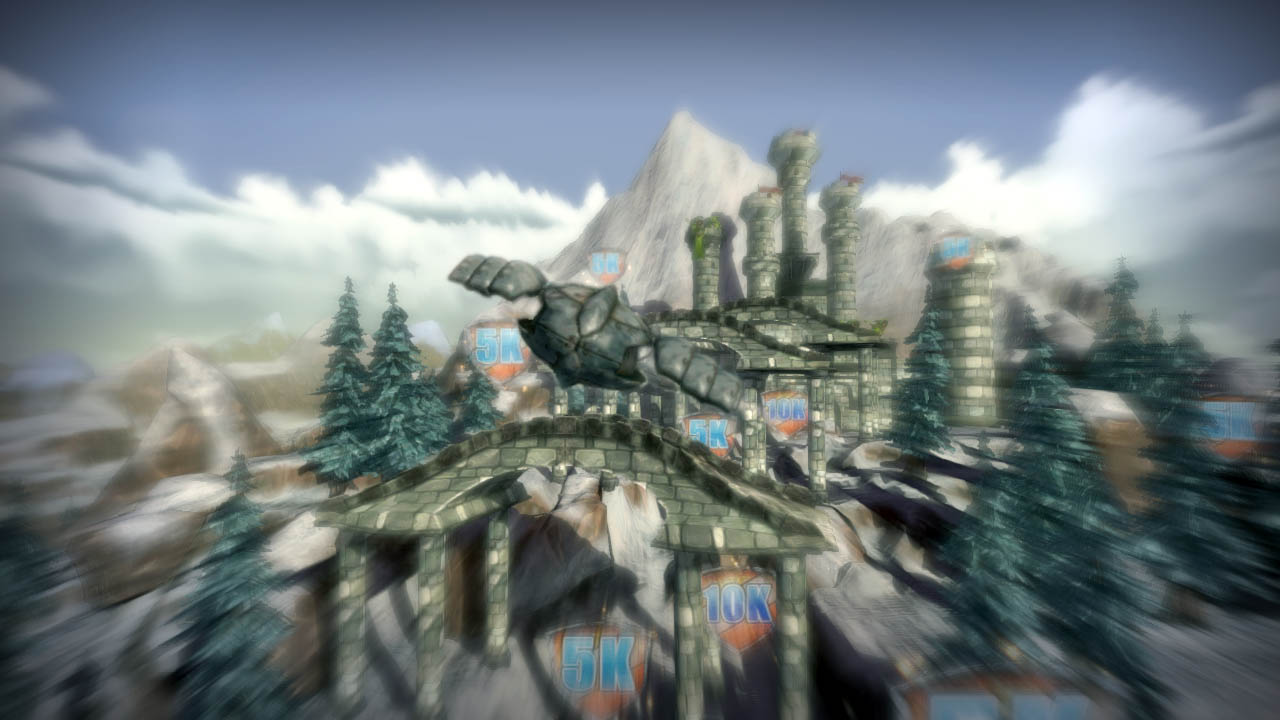 Why would anyone want to take the time to master Wreckateer? Apart from the fact that it’s darn fun, the scoring and leaderboards are set up specifically to make you want to play levels over and over in the hopes of defeating your friends, just like Geometry Wars 2 did years ago. A bar on the right-hand side of the screen shows you your score, but it also shows you the score of whoever on your Friends List is directly ahead of you. If that’s not intimidating enough, once the level is over the game will give you a shot-by-shot breakdown showing you exactly where you fell short. With the quick playtime of the levels, this is a game that is guaranteed to have you saying “just one more try” as you attempt to take over the high slot on the leaderboards.

With all this stuff crammed into it, Wreckateer would seem a perfect candidate for the developer to take the common path of delivering only a few levels to try over and over to perfect, hiding behind the complex mechanics as a substitute for content. Instead there are a total of 60 levels in the game, spread across worlds described as “summer”, “winter”, and even a “Mordor-like” area. As the game progresses, you’ll face increasingly difficult challenges, having to thread your shot through small holes or avoiding (or bouncing off) unbreakable iron towers to reach your targets. You’ll earn medals based on your score, but as the developers told us, you can’t expect to get a gold until you’ve taken the time to plan out every shot on a given level to maximize your points. 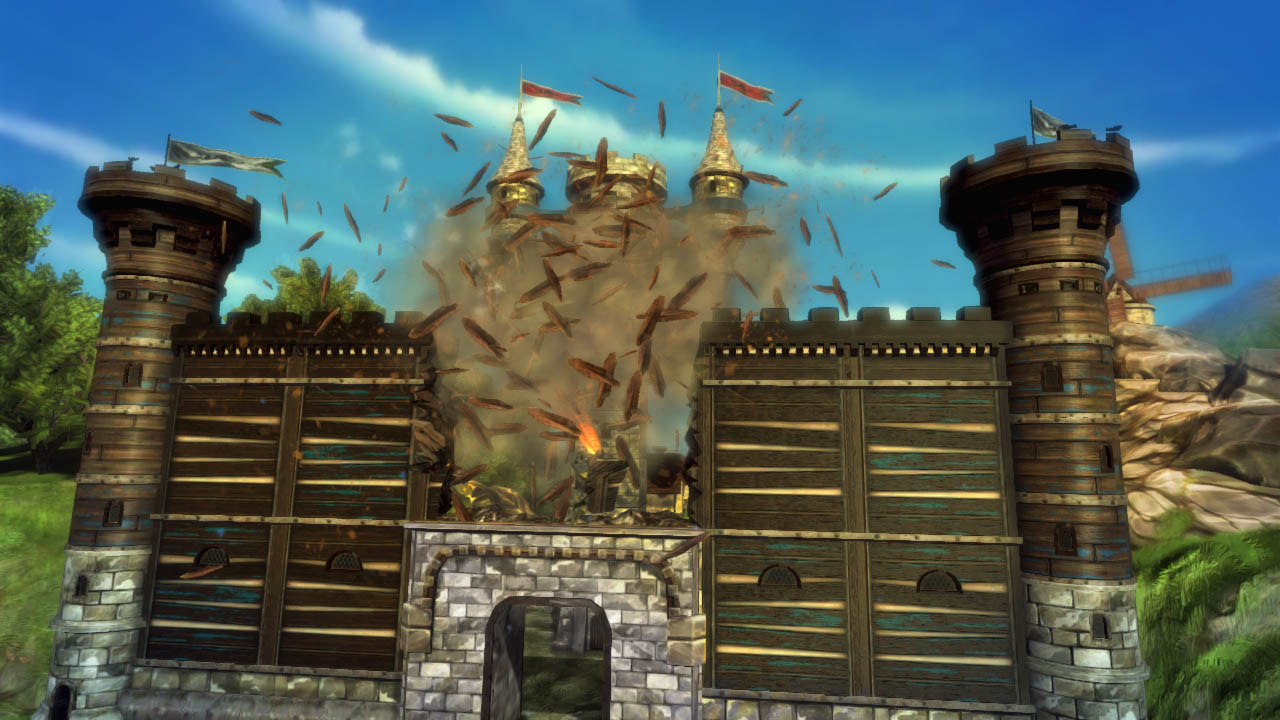 Wreckateer has all the pieces it needs to be a huge success – the fun factor of Fruit Ninja Kinect, the leaderboard-induced frenzy of Geometry Wars 2, and the massive content load of Super Meat Boy (which I can almost guarantee will never be mentioned in an article about Wreckateer ever again). Will it be as successful as those games? We hope so, and you should too. Iron Galaxy has crafted a Kinect game that takes the general aiming ability that the platform is so great at and found a way to integrate some real accuracy into it in a way that other titles could learn a lot from. It’s also a heck of a lot of fun. Luckily Wreckateer is on XBLA, which means that we expect the demo to be in each and every one of your download queues when it releases this summer so you can find out for yourselves.