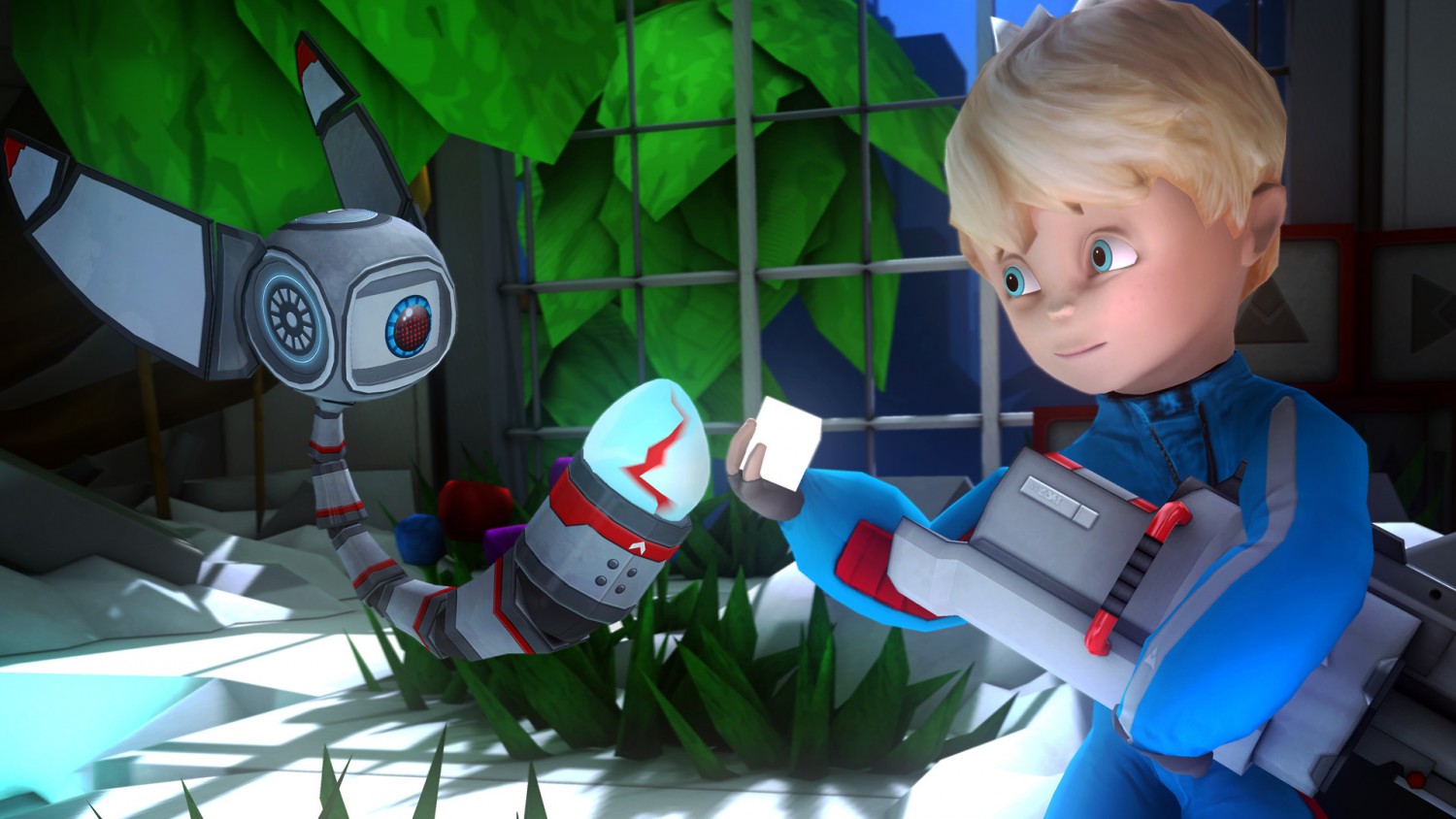 Kick & Fennick is the latest platform adventure to hit Xbox One but what’s different about this one is that it’s a platformer without a jump button. Instead, you use the kickback from a powerful rifle to boost through the various obstacles that lay ahead.

Players take on the role of Kick, who starts the game by waking up inside a stasis booth in a strange, deserted building. Kick meets a small, flying robot named Fennick who protects him from a menacing guard robot. Unfortunately, Fennick’s battery is broken in the fight with the robot, so together the duo embarks on an adventure to the Core Tower to find Fennick a new one. 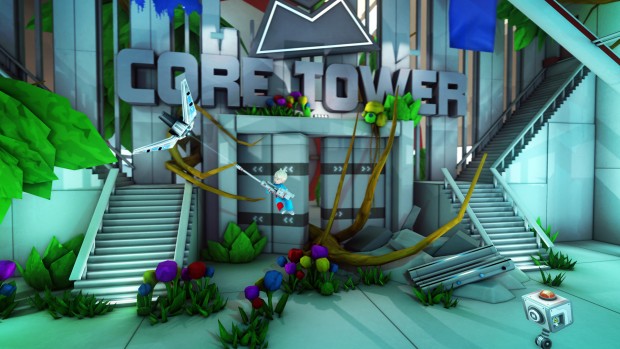 Great gameplay — Since Kick can’t jump you’ll need to use the recoil from his gun to propel him platform to platform making for some interesting and fun gameplay. Using the right stick to aim your gun brings up a helpful dotted line to show which direction you’re headed. It also temporarily slows down time, allowing you to get the right angle and for firing. You’re given two shots of the gun per jump, meaning that you can experiment with some fancy mid-air turns. Platforming veterans will be pleased to hear that the physics and controls are pretty tight, and I always went in the direction I thought I would; any failures were down to my own miscalculations and not the game. The gun can also be used in a more traditional way: shooting various angry robots who try to get in your way. This is also done in slow motion, which allows you to pull off some pretty badass moves.

Nice learning curve — A lot of platformers these days aim to punish the player rather than elicit any sort of enjoyment. Kick & Fennick, however, eases you into the gameplay with a gentle learning curve. That’s not to say the game is easy; it does get progressively more difficult, adding bounce pads, laser beams, water sections, speed ramps and some very clever portals later on. However, these are introduced gradually in a manner that teaches you how to play rather than serving to frustrate. If you do fail, Fennick jumps in to take you back to a previous platform — literally acting as the game’s checkpoint system — but fail too often and you’ll have to restart the level. There are three levels of difficulty (Easy, Normal, Hard) to choose from if you do want more of a challenge or want to tone things down a bit. 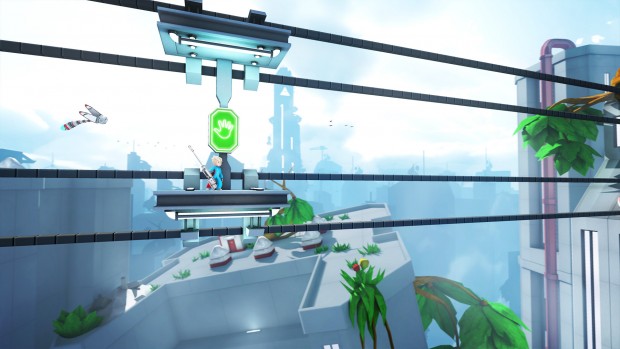 Plenty of puzzles — Kick & Fennick comes with 45 levels set across five chapters, which gives you plenty of content to puzzle through for your entry fee of 15 bucks. Though some of the later ones are more extensive, most levels are fairly short, but I enjoyed the nice pick-up-and-play vibe this brings. The whole game can be completed around 7-8 hours but if you want to search for every collectable and unlockable costume, or go for the Hard difficulty achievement, then it is likely to take longer.

Bang up bosses — Woah, a boss fight that’s actually fun? Normally I put these in the negatives section, but the boss levels in Kick & Fennick are a real highlight. At the end of each chapter players come face-to-face with the giant robot from the start of the game. Rather than hitting a weak point X number of times, Kick & Fennick continues the puzzle theme with Kick having to outsmart the dog-like robot using the skills you’ve been honing throughout your quest almost like an end of term quiz.

Bright graphics — Jaywalker Interactive originally designed its game for the PS Vita, but the studios has done a nice job porting it to the Xbox One. The clean and bright graphics look great on a large screen, and the game’s pallet of primary colors against a clinical white background really catches the eye. The main characters, too, are cute and appealing, especially Fennick and his massive ears. 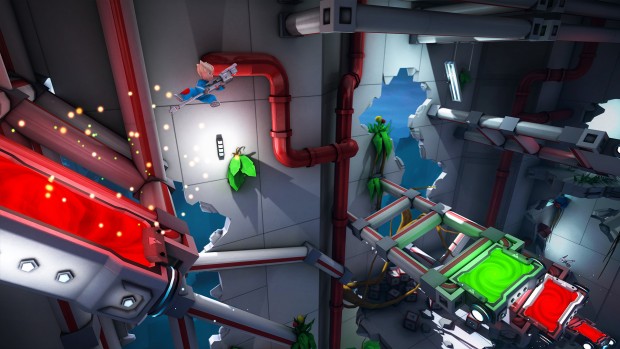 Maybe a bit too bright — As much as I enjoy the crisp-looking graphics, problems arise when the developers place white direction queues against a mostly white background. I frequently struggled to see where my gun was aiming as the dotted lines disappeared against the bright screen. Hopefully Jaywalker can eventually patch in a new color to solve this.

Something missing — Whilst I enjoyed my time with Kick & Fennick, it was missing a bit of personality. Kick himself is a fairly bland protagonist, a generic blond, blued-eyed child with no dialog. I wasn’t quite sure why he was in a stasis pod at the start of the game, and neither did I care. His adorable sidekick Fennick, on the other hand, is much more interesting but is criminally underused. Whilst there were some cuddly moments towards the end, I would have loved to have seen more interactions between the two and a bit more humor and heart injected into the game.

I’m not the biggest fan of modern platformers, many of which take great pride in frustrating players. However, I thoroughly enjoyed my time with Kick & Fennick. Its tight controls, fun physics and progressive pacing made this a real joy to play through, and when the game did get challenging, pushing through felt more like a punch in the air than a kick to the groin. I’d have loved to have seen a bit more personality added, but Kick & Fennick was an overall entertaining experience.