The humble platformer is one of the oldest and probably still one of the most prolific genres of video games on consoles today. So for one to stand out from the crowd, one needs a good hook. Luckily Hue from British indie developers Fiddlesticks, has one heck of a hook with its ability to shift background colours to change the game’s environment, manipulate objects and solve some frankly devious puzzles.

The premise is that our titular hero Hue has set out on a journey to solve his mother’s disappearance. Through her discarded research found in letters, Hue discovers the ability to see the world’s hidden colour and change it to alter reality. As we unlock each new colour, they are added to a special ring which players can access by turning the right stick. Changing colour also slows down gameplay, allowing some on the move changes and often hectic platforming that we come to expect of the genre.

Fun gameplay – Well colour me impressed because this colour changing mechanic had to be one of the most interesting concepts I’ve seen in a platformer in a long time. The basis of the game is that Hue’s universe has lost all colour until we set about restoring it by finding each one throughout the world. Once a colour has been found, you are then able to manipulate the background to show or hide various obstacles. Each game level consists of a room with an entrance and an exit. Players must get to the exit using only the colours that have been unlocked so far. It’s a fairly simple process, but the puzzling is the perfect balance of challenging yet achievable. There is some slippery platforming which can frustrate during faster-paced sections, but the majority of the gameplay can be done at your own pace. The game also has a slight Metroidvania style, where it is possible to backtrack and take different routes, but this is only necessary for hunting down the game’s collectible science beakers which are hidden throughout the game. I was able to complete the game without backtracking once, though I didn’t find all the extras. However, it is possible to go back through the various areas in the game after the credits run to pick up anything you missed using a handy map screen.

Colouring outside the lines – Far from being a one-trick pony, developers Fiddlesticks manage to come up with some fairly ingenious uses of the colour change mechanic. In the early stages, this may be a simple as changing the colour to reveal a hidden crate that you can jump on or using the colour ring to hide something more dangerous like a falling boulder. However, as the game progresses, we are introduced to paint sprays, deadly lasers and colour changing bounce pads to keep things interesting. Additionally, the platforming itself becomes more complex as each colour on the ring is unlocked, and you may have a few rapid mid-air changes to navigate which can challenge your reflexes alongside the brain-busting puzzles. Each of these mechanics are introduced at a good pace so whilst Hue does become more difficult, the knowledge you’ve gained throughout the game should keep you from becoming stuck for too long. Similarly, your death count is likely to mount up, but since the game checkpoints as you enter each room, none feel particularly frustrating or unfair.

Beautiful like a rainbow – Since Hue is a game about colour, I was expecting the game to look good graphically, and I can happily report that the presentation is certainly top notch. The game’s solid black foreground, similar to cult hit Limbo, is eye-catching enough, but where Limbo is designed entirely in greyscale, Hue’s background colour can be changed to a bright, almost glittery shade of the colour depending on the puzzle requirements. Its simplicity is eye-catching and really helps Hue stand out from the ever busy platforming crowd. I should also point out that Hue has a handy colourblind mode, which when activated uses unique shapes to distinguish between each shade on the ring, ensuring that everyone can still enjoy the game’s beauty. 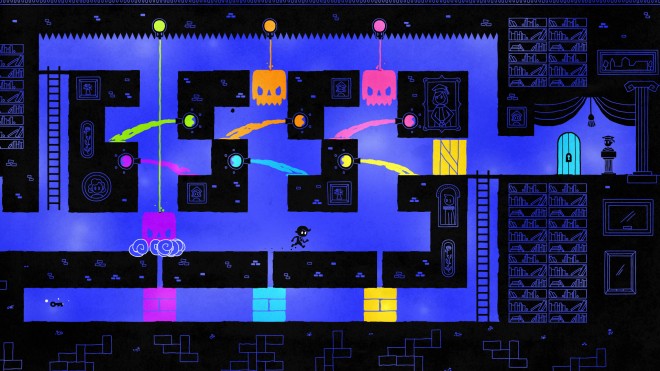 WTF story – Platformers are not renowned for their complex storylines but Hue takes it a step too far with overly perplexing narration. Throughout the game Hue finds letters from his mother who rather than give any useful advice, instead, chooses to tell him some philosophical gibberish about colours. From what I gather her disappearance was something to do with a magic ring and an experiment gone wrong, either in the past or another dimension, or maybe both. I’m sure it’s fascinating, and if I had a clue what was actually going on this might be in the positives section, however despite completing the game, I’m no clearer on Hue’s storyline. Perhaps if I was able to pause the game and reread each of the letters, I might be able to get my head around it. Sadly there doesn’t seem to be the option which seems like a missed opportunity as a nice collectible reward. 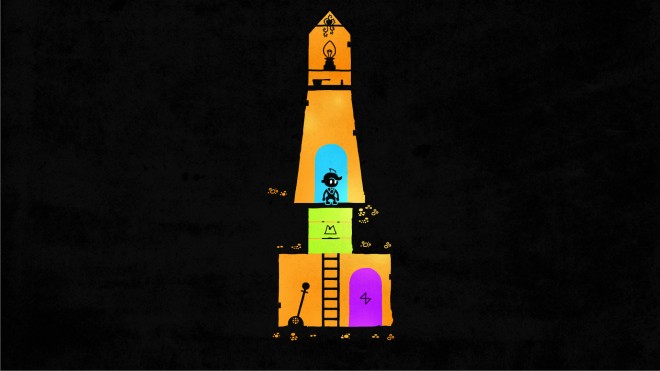 Hue is a challenging puzzle platformer, but it’s one that serves to teach and reward the player rather than frustrate as so many modern platform games do. The puzzles certainly had me scratching my head on more than one occasion, but the leisurely pace of the game allowed me to sit tight and have a good think before making my next move. It was such a rewarding feeling to solve a puzzle you were stuck on, and since the answers were so logical once you see it, you wonder how you were stuck in the first place. Aside from an iffy story, I couldn’t fault the game and even after spending 10 hours on my first run, it’s one I’m keen to replay outside of a review deadline just for fun.

So this is what Limbo looks like with the lights on 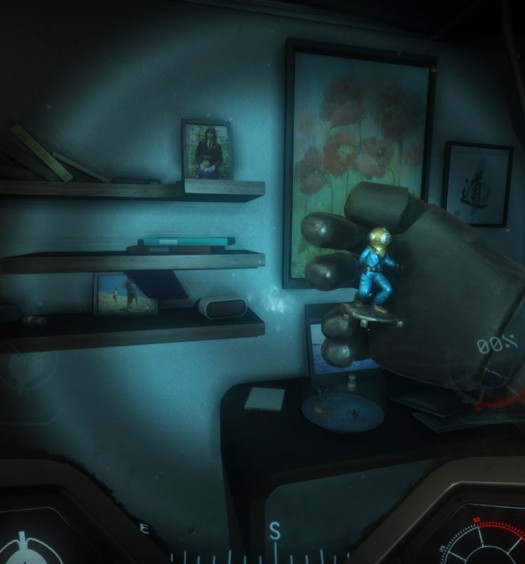