Haunt was developed by developed by NanaOn-Sha and Zoë Mode and was published by Microsoft Studios. It was released January 18, 2012 for 800 MSP. A copy of the game was provided for review purposes.

Haunt is the latest Kinect enabled game to hit XBLA, and with PaRappa the Rapper creator Masaya Matsuura at the reins we know we’re in for something a bit different. You play as a “kid” who wakes up in an old mansion when a mysterious painting calls you over. It turns out to be the mansion’s owner, Benjamin Muldoon who has been trapped there by ghosts. He asks you to explore the haunted mansion and collect “Phantaflaks” (regular orange soda just won’t cut it) that can be used to free him once and for all.

If you’re expecting something along the lines of Silent Hill then you’re going to be disappointed. The scares in Haunt are more on the campy Ghostbusters level. Playing like a cross between an old school point-and-click game and a Haunted House amusement ride, there’s about as much frights as there is rapping but that doesn’t stop us being thoroughly entertained. 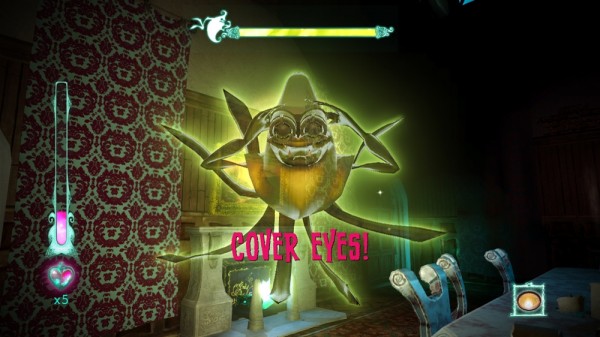 Controls – On starting the game you’re given a quick tutorial: to walk, just walk on the spot. To turn, you move your hand as if holding a torch in the direction you want to go. To open a door, mime opening a door etc and that’s pretty much all there is to it. Selecting an object is easy too, just hover your torch over it for a few seconds and the animation kicks in and does it for you. The controls are wonderfully executed and feel like second nature, giving the game a level of immersion that makes you feel like you’re actually there. The design also allows good room for error so you don’t need to worry about being directly in front of an object or door, as long as you can touch it with your torch light the game will zoom in over reasonable distances for you. A few niggles around maneuvering corners aside and the controls in Haunt are some of the best we’ve seen for Kinect so far.

Sound FX – You’ve probably already heard that Double Fine’s Tim Schafer makes an appearance as the game’s narrator and guide but we can confirm he puts in a stellar performance. Poor voice acting can often ruin a good game and it’s great to see such quality acting in this one. Like a good Pixar movie, the script is clearly aimed at kids but with the odd underlining joke for the adults to enjoy. The background music is fairly unobtrusive with mostly just your footsteps for company. All the classic haunted house effects are here too with creaky doors and manic laughter from some unknown source.

Artwork – The scenery in Haunt warm and colorful and though the ghosts might look like long lost relatives of Slimer, the game’s designers strike the right balance of being spooky without keeping you up at night. Think lots of candelabras, shadowy corners and eyeballs that watch you. The attention to detail is high and you may find yourself just standing around looking at the paintings on the wall or admiring the decor. There’s a cartoony feel to the game but it’s certainly an expensive looking one.

Adventuring – The gameplay is good clean adventuring at it’s finest. Almost like an old school point-and-click adventure, you gather items and join them with others to progress through the story. There’s also the odd ghost for you to battle, each one with different attacks for you to avoid such as covering your ears or eyes at the right moment or ducking down when a charging ghost attacks. There’s enough variation to feel you’re getting novelty use out of Kinect without appearing contrived. The battles and puzzles are a little on the easy side but they’ve got so much charm and innocence that it’s easy to forgive. 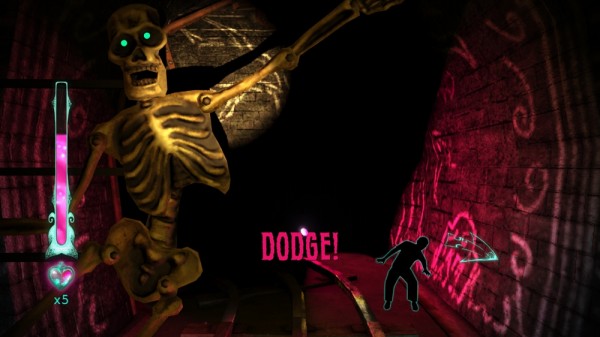 Over too soon – Each stage probably takes around half an hour to complete with the full game clocking in at around 4-5 hours long. You can replay each section but there’s often not much reason to as it’s easy to get most of the achievements on your first playthrough. Of course you’ll be wanting another shot on that awesome ghost train ride! There is a section for downloaded content in the main menu hinting that addons may be available later, but for 800 MSP we’d have preferred another couple of levels included. Isn’t that the case with any game you like!

Not enough side questing – Again this really amounts to us wanting the game to be longer but other than collecting newspaper clippings, there’s nothing else to do other than follow the main story. More collectables or the addition of some mini-games might have helped pad it out a bit and give you a reason to replay. 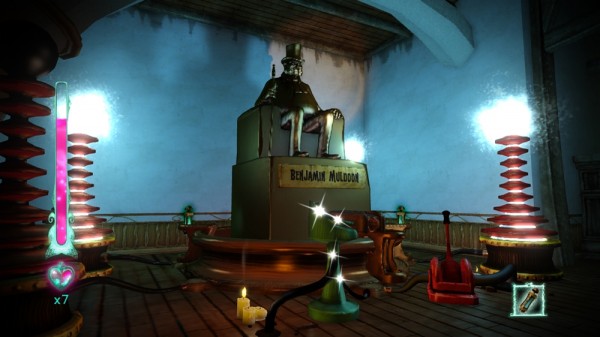 The game is clearly aimed at a family friendly audience but if you’re happy to throw caution to the wind and re-live your youth Haunt could charm the pants off anyone. The game has a classic feel to it and although Kinect is a new concept you might find yourself reminiscing of old adventure games. It’s also nice to play a Kinect game that’s a proper “game” and not solely designed to burn calories! That said the game is still too short and a bit easy. If you’re still looking for a reason to by Kinect, this might not be it however if you’ve already got one then this is a must own title.