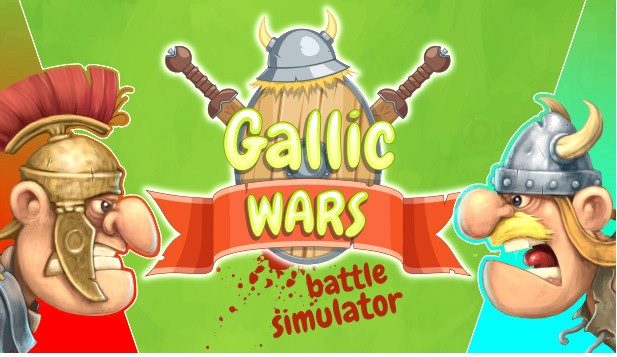 Gallic Wars: Battle Simulator is a battle simulator where you position your troops and traps, then let the simulation play the battle out for you. You can prepare and set traps to gain the upper hand. Your main goal is to take Rome, but you must fight your way there while gaining as many troops and items as you can for the final battle. As you defeat enemies you will gain generals (hero characters). They will lend you different benefits in battle. You can set traps, create suicide troops, and even unleash a fireball onto the enemies. Destroy them all or make them retreat to win. Once you take over Rome, what will you do? Well, do it all over again of course!

Interesting Battle Sim — There’s a lot of good ideas that I actually liked in Gallic Wars. It’s almost like a brainstorm that never had any real conclusion. Being able to change the color of units and position them is really cool (though not needed). They have some items you can use to help on the battlefield but most of them are also not needed. I enjoyed unlocking leaders to make the game easier. It was actually the only reason I played for as long as I did. It almost felt like a roguelike genre (as advertised) with how I was failing a lot at first only to become an unstoppable force later on. So, yes, there are interesting ideas for sure.

Bare Bones — There isn’t much to do. You play one campaign over and over while you gain new heroes. These characters will give you a boost, however many of them do the same things. It’s quite the grind to get them all; and after you unlock everyone, there’s nothing to do so you won’t even use them. Almost everything seems limited. You get only a few different units and a small selection of random traps and items. After struggling for a little bit, suddenly the game becomes incredibly easy. I must have beaten the game 30 times. I would just spam all my units and attack, barely using any of the items or trying to strategize. You can place units in different positions, assign them a group, and face them in various directions. None of this matters. You can throw them all in a pile and win every single battle. That’s all you do. Nothing is too interesting, not even the environments. They are bland and you’re only allowed to place your army in specific areas. This takes away any extra strategies and makes the one campaign you can play very repetitive. It feels like a demo instead of a full release.

Controls — The tutorial was the hardest part of the game. It makes you do specific things before moving on. This is because they don’t make any sense. I don’t know how to explain it but, even after several hours, I was still struggling to do certain things that should have been easy, like canceling a placement. Maybe this would be better on a PC but using a controller is awkward and annoying. As a bonus annoying feature, the sounds when placing units are extremely loud and once you run out and still holding the trigger, a violent controller vibration happens. I thought it was going to explode! Just really a bad decision to add. You can’t just add “all units”. You have to wait while you place them. Needs a ton of work.

It was terrible at first but the game got a tiny bit better as I played. However, there is absolutely nothing to do besides the one campaign. It’s extremely limited. There’s so little to do that it’s hard to even talk about it. After gaining a few of the generals, it becomes a mindless dump and fight. You dump all your troops absolutely anywhere, then just start the battle and win. Sure, there are a few good ideas but they were barely scratching the surface. The controls are so difficult to master that even after more than ten hours of playing, I was still struggling at times to figure out how to do specific actions. And there really aren’t many to know. At least the game doesn’t come with a big cost associated with it, so if you’re an achievement hunter it might be worth your completion.

Gallic Wars: Battle Simulator was published by Ultimate Games and developed by MadGamesmith on Xbox One. It was released on June 16, 2021, for $4.99. A copy was provided for review purposes.