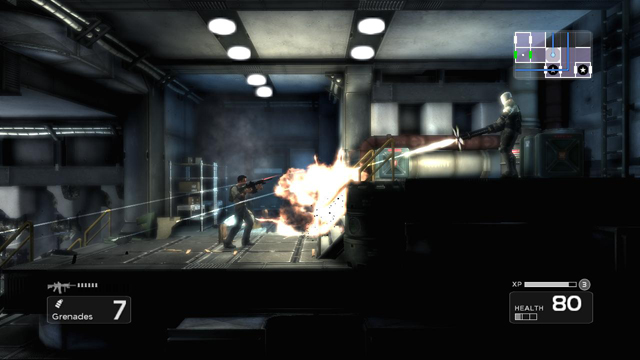 The progression of Jason Flemming from concerned spelunker to fully-loaded cyber god was one of the best experiences on Xbox Live Arcade to date. Not only was it sleek, shiny and accessible, but the progression system created by finding new gear to eliminate a small army of private mercenaries and unlock new paths meant you were constantly returning to previously unreachable portions of the map. Shadow Complex was loaded with content, and for those dedicated enough to exploring every nook and cranny of the titular shadowy complex, you could spend days uncovering the secrets contained therein.

Unfortunately once you’d acquired the arsenal of gadgetry scattered throughout, there wasn’t a whole lot of incentive to return. Sure, you could speed run it, trying to knock out a few of those punishing achievements, but for those players that really sunk their teeth into the core experience, Shadow Complex likely left you wanting more.

There’s been talk of a sequel ever since the game dropped back in 2009, and while Chair Entertainment has since moved on to focus on the Infinity Blade mobile series, every once in a while some combination of the words “shadow” and “complex” pop up in an interview and remind everyone there’s still hope. The next chapter of Shadow Complex could go anywhere, but as long as that core mechanic of exploration, innovation and discovery remains intact, it’s hard to imagine a sequel that doesn’t deliver on the success of the first.