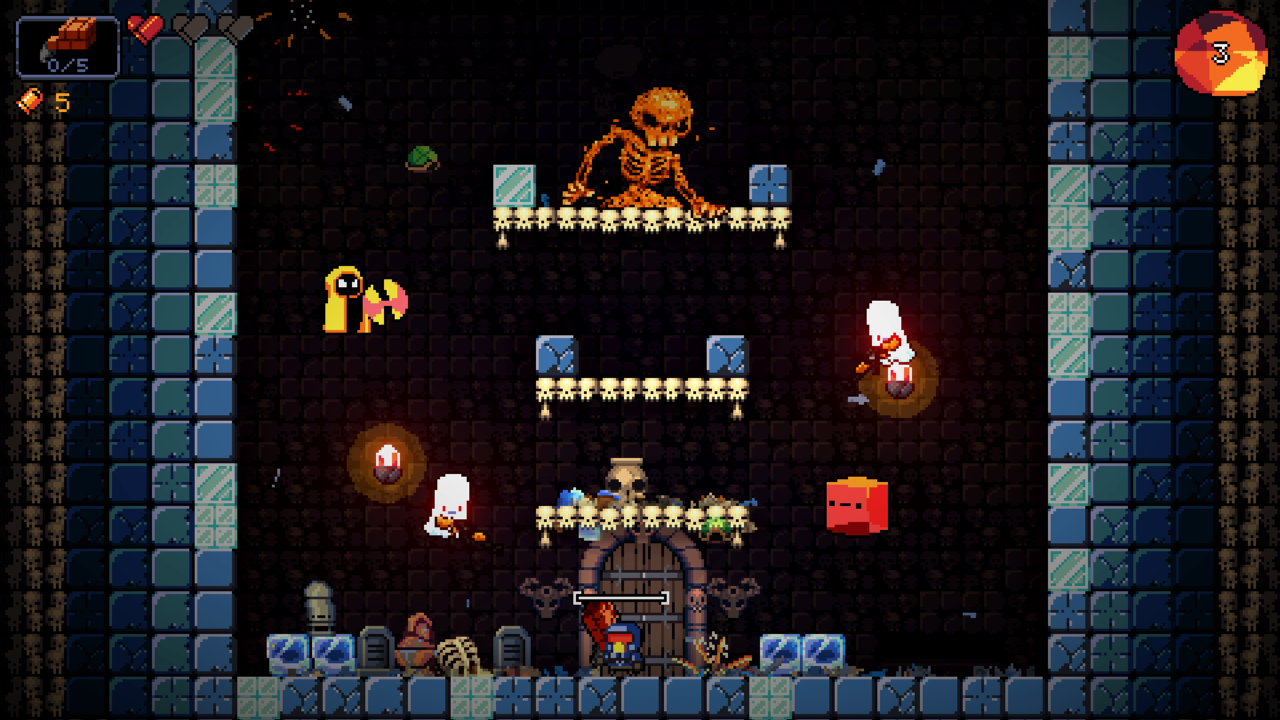 By Nathan Bowring  •  8 months ago

“Wait a minute, now we have to Exit the Gungeon?”, I hear you cry. “Entering it was bad enough, and after all those attempts we finally got that cool time-killing gun, so that means the adventure’s over… right?” Oh, if only it were that simple. Any self-respecting ancient temple isn’t just going to let robbers take its treasure, so why would it stop its assault because you got the goods? You’re deep inside, battered and bruised – now’s the perfect time to retaliate at full force. We’re not talking some simple trap like a giant boulder or buried undead army – The Gungeon’s going to destroy space-time and erase its very existence just so it can take you down with it.

A new look – Where Enter the Gungeon had you exploring labyrinthine systems of interconnected rooms searching for loot, Exit the Gungeon has you beelining to safety on high speed elevators, trolleys and other similarly fast-paced scenarios. The biggest change is one of perspective, as this game is a sidescroller where the original was top-down. The gameplay now moves at a brisker pace, feeling more akin to a wave-based shooter than its dungeon-crawling roots. Most levels are simple single-screen affairs, sticking you in claustrophobic arenas as enemies swarm in from every direction. While the endless stream of enemy bullets will make everything feel cramped, your nimble jumps and dodge-rolls will keep you from getting shot in even the tightest of areas. Most of the original’s roguelike trappings remain intact: randomized enemy encounters, an arsenal of crazy weapons and adorable bullets with faces.

Go your own way – The four playable characters from the original return, each with their respective strengths and weaknesses. The Marine is the best shot, the Pilot gets the best prices, the Convict gets a rage bonus and the Hunter has a helpful dog. Previously, their only differences were a few tweaks in how they play; this time the entire game is different depending on your choice. For example, everyone has a mineshaft level, but where the Marine rides through on a speeding cart the Convict is running on foot from a giant worm. While there’s some overlap, specifically the first level and boss fights, you essentially get four unique playthroughs. They’re all a lot of fun, and the ability to switch between characters whenever you want really fuels that “just one more run” addiction.

Hats off – The middle of each level takes a pit stop at the store, allowing you to take a breath to stock up on health and other useful items. You’re also given the chance to tackle some optional challenge rooms for earning cash and potential loot. These are mostly quick single-screen affairs, offering more fun combat, but it’s the non-combat rooms that are more interesting. Across multiple runs you’ll be able to rescue allies, who will show up again and provide help in later runs. The more captives you free, the more the game opens up and the higher the odds of escaping become. You’ll have more friends showing up in the starting area to sell you items, more aid hiding within levels, and even bonus mini-games with great prizes. Then there’s one that one guy who operates a hat store; his wares are functionally useless, but the way hats fly off your head when you dodge is downright charming.

Blessing and a curse – Randomization is key to the roguelike genre, but Exit the Gungeon may have the most aggressively random feature. In the standard mode you’re only given one gun with infinite ammo, but it’s magically replaced every 10 seconds. You always start with a pistol, but soon it could be a lame pea shooter, or a sweet shotgun that shoots smaller shotguns. If you can keep a good combo going without getting hit, the better your gun will be in the next refresh. It’s a neat system at first, but as the game gets harder you’re going to want more reliable gear; even if a gun is technically “better”, it’s not always better for the situation. Imagine a boss battle where you need to keep your distance; your gun could spontaneously become a shotgun and stymie your damage output. Surrounded by enemies? Too bad you’ve just been given a sniper rifle. Thankfully a more traditional “arsenal” mode unlocks before long, allowing you to find and collect weapons like any other game. Ammo in this mode is limited, so at least both modes have their drawbacks.

Exit the Gungeon is a smart remix of the original, streamlining its approach while offering the same intense shoot-em-up action. While it can feel smaller than its predecessor, in no way is it lacking in level variety, weaponry, or personality. Now that the series has a top-down shooter and a sidescroller under its belt, when will we be getting an Enter the Gungeon first-person shooter?

Exit the Gungeon was developed by Dodge Roll and published by Devolver Digital. It was released November 13, 2020 for $9.99. A copy was provided for review purposes.