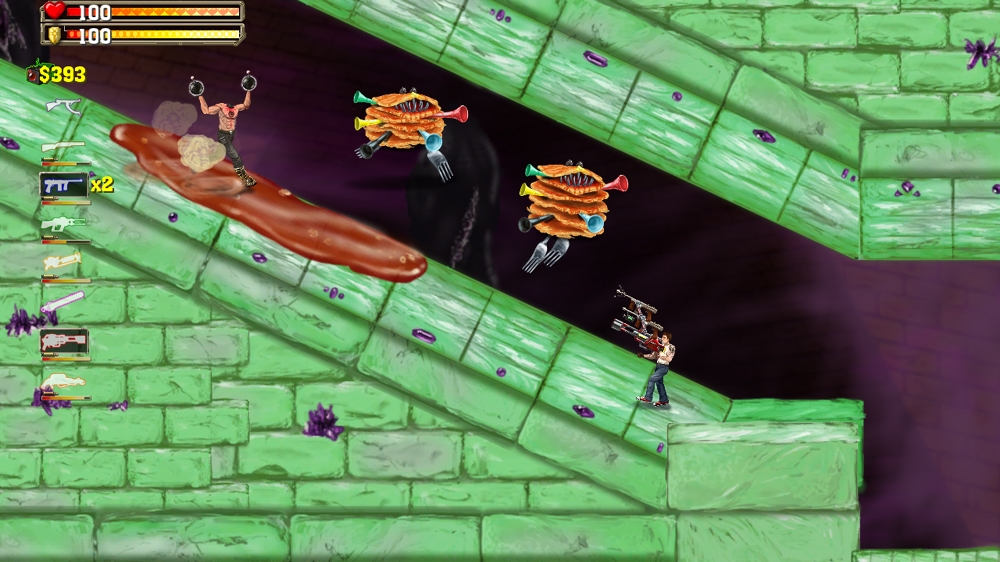 Stack ’em up – Like any shooter, SSDDXXL will introduce new guns as you go along. However, it will also hand you stackers to attach guns on top of each other. You can wield one gun at a time, but you get much more bang for your buck by combining your guns together to create a literal wall of death. As you press through the hordes of headless enemies, you are rewarded with additional shotguns, machine guns, rocket launchers, chainsaws, lasers, etc. all of which can be stacked to a maximum of 6 guns firing simultaneously.

Stack it your way – On top of stacking, your accumulated cash can buy upgrades that add special traits to your guns. All eight gun types have four different variations to unlock. Modify your grenade launcher to spawn a swarm of flesh-eating beetles, or your shotgun to freeze enemies in place. Some of these are simple damage boosters or homing shots, but you also get unique modifiers like a yo-yo chainsaw that can grind enemies around you. By mixing these up in your gun stacks, you can create your own killing style for the many wacked-out enemies you will encounter.

Not just target practice – Where most games will spawn enemies that attack, die, and then disappear, SSDDXXL instead keeps its corpses on the field to alter the landscape. Sometimes you will even need to use bodies as stepping stones to cross lava or spikes. Larger enemies become their own hills to climb up for higher vantage points. This litter of flesh bridges keeps the arena constantly changing, adding extra layers to jump off and duck under while you dodge incoming fire. It’s a simple mechanic that keeps combat unpredictable and dynamic.

Classic competition – SSDDXXL is meant to be explored and exploited. Its standard campaign is your typical left-to-right procedure, but the true value comes in swiftly racking up kills to advance in the leaderboards. You can even play at an accelerated speed to get quicker times if you can think and react quickly enough to survive. Then, you can attack the unlockable challenge levels which bombard wave after wave of enemies against you with one specialized gunstack, such as five chainsaws. Add in anytime co-op play and several difficulty levels, this game becomes surprisingly rich in content and challenge. 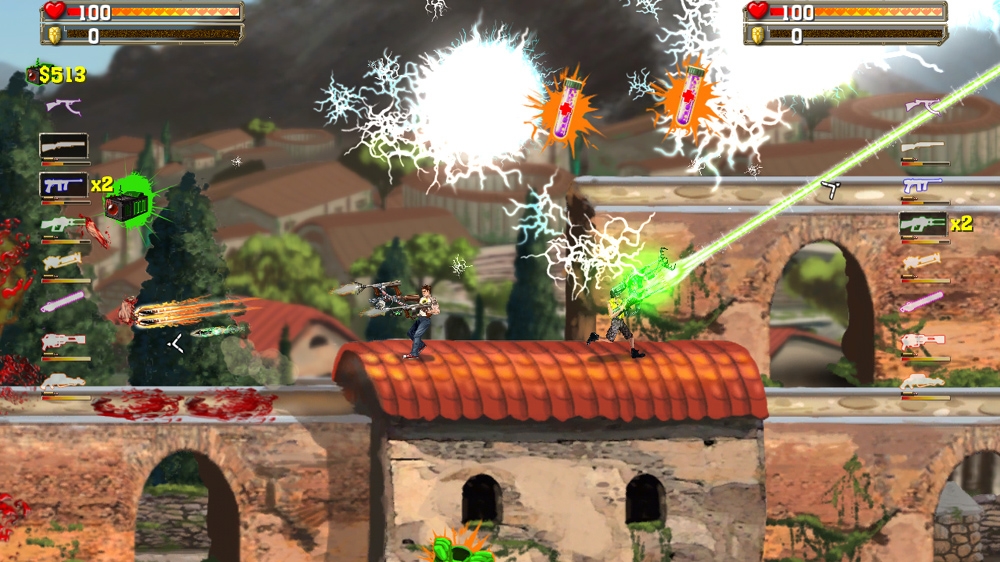 Seriously? – With a title like Serious Sam Double D XXL, you don’t need to play this game to learn (ironically) that it does not take itself seriously at all. If you’ve played previous entries, you may care to see the story continue, but it’s really nothing more than stupid banter earnestly trying to elicit a chuckle. Sam is a dumb brute with guns, his assistant Netricsa is condescending and impatient, and the mysterious merchant spits out random one-liners with no context. It does at least give some reason for killing stuff, but most of it is just filler.

One size fits all – Despite all the customization options available, for the most part you will be all set occasionally modifying one or two combinations. Enemies’ behavior doesn’t get much more advanced than a kamikaze blitz or a barrage of projectiles. Some upgrades will penetrate armored enemies, some guns will help you traverse the environment, but fighting generally boils down to pointing all 6 guns at whatever is biggest and closest. To replace a valuable stack position for a jump-pad launcher seems counterproductive, despite the creative possibilities.

However, even with these gripes, Serious Sam Double D XXL is a riotous testament to the classic style celebrated on Xbox Live Arcade. Its simple premises open up a plethora of gunplay styles with stacks of possibilities. Its meaty 10-hour campaign is littered with secrets to keep you coming back for more upgrades and customized stacks. The game is especially suited for those who itch for leaderboard supremacy earned by creativity and skill, whether just among your friends or in the worldwide fanbase. Its irreverent style is certainly not for everybody, but its clever mechanics and tight gameplay deserve your attention for a trial.