The Cave is an adventure game of the 2D platform and puzzle variety wherein you guide three characters along a journey through a mysterious, question-answering cave. Seven characters — amongst them a Hillbilly, Knight, Scientist, Monk, Time Traveler, Adventurer and a set of creepy Twin children — each find themselves with a deep desire which they believe the cave can satisfy. Though they have an overt motive for venturing into the cave, Gilbert says there’s something deeper going on in The Cave. 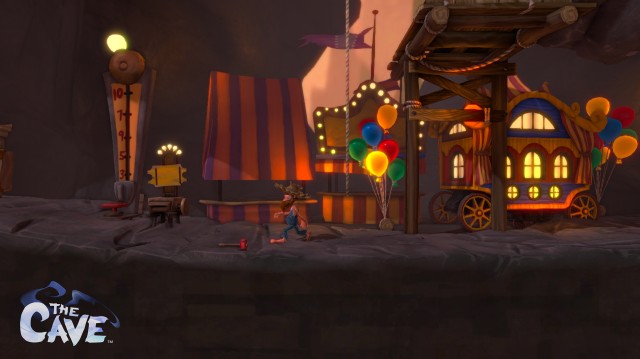 The intro immediately established The Cave as a “point and click” adventure game, and unabashedly so. You take three of the seven characters into the cave each time you play and swap control between them, or if you have two friends they can play with you, drop-in/drop-out style. Each character has its own bit of story, unique character presentation and a special ability. However, every character shares one thing in common: they can pick things up. Picking things up and placing them where they (sometimes don’t) belong never gets old.

In our demo we saw the Hillbilly, Knight and Scientist. Shortly after entering the eponymous cave, the crew encountered a massive, ornery beast adamantly guarded by a spike pit. Spikes. Why did it have to be spikes?

Dangling above the spike pit is a crane and rope, and since The Cave has a bit of platforming in it, our guide figured it’s a good idea to just swing over the pit by jumping onto the rope. Well, it wasn’t. The monster came out and wreaked havoc on our poor Hillbilly, but there was no game over or load screen. Instead, the Hillbilly simply reverted back to his position in front of the spike trap, scratching his under arm as though nothing had happened. All death and failure is handled in this fashion; either things don’t work, or you die and you return to the last point before they stopped working. 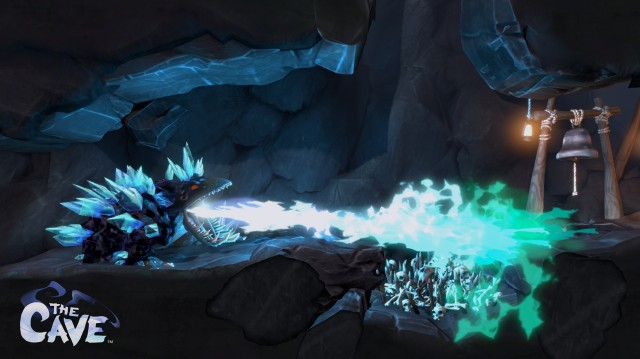 We solved the problem by baiting the monster with an oversized hot dog weiner from a vending machine (titled OMDog), then used the crane  to hoist the beast far out of the way. Though this one didn’t, the majority of the puzzles will require the use of some of the characters’ special abilities working in tandem to solve. As such, the solutions will change each time you play, or so we’re told.

Each character’s ability grants them access to a level tailored specifically to their story. Once inside the level of course the other three characters will be useful, but that main character will be pivotal to the success of the area. The Knight’s story involves a princess, a dragon, and his guardian angel ability which protects him from all harm for as long as he sustains it. We don’t want to spoil this part of the game, suffice to say the Knight learns a lesson in courtship he’ll not soon forget. 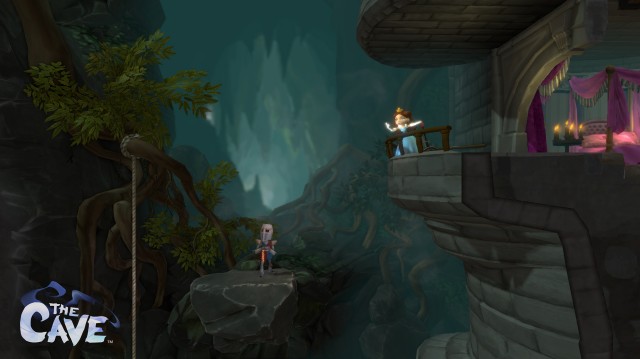 None of the characters talk, so Gilbert feels these levels are important milestones in elucidating the personality of these individuals. Each of the characters have very fleshed out animations specific to their character to give them a unique feel and demeanor. He said Double Fine “wanted to make walking around fun”.

While sitting in the demo room we insisted there must be some reason, some rhyme to this specific cache of characters. Why seven? Why a hillbilly or a time traveler? Gilbert told us he came up with tons of characters, then searched for those with a good gameplay hook to go with their quirk. Gameplay and theme here intertwined to create the character selection available for the full game, and much of the levels were designed with the same tenet in mind. A CIA Agent and a Movie Star were casualties of the design process, though here’s hoping that concept art makes it out of the Double Fine den. 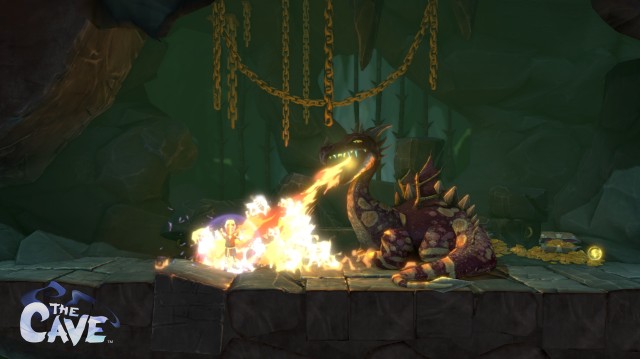 While The Cave is presented as one massive, seamless Metroidvania style world, this is an adventure game at heart. Double Fine’s sense of charm permeates all, from goofy characters, to humorous narration, to the natural flow of comedy that doesn’t insist. Double Fine knows you’ll laugh at it, they don’t have to insist.

We insist you gear up for this descent pending its release early 2013.