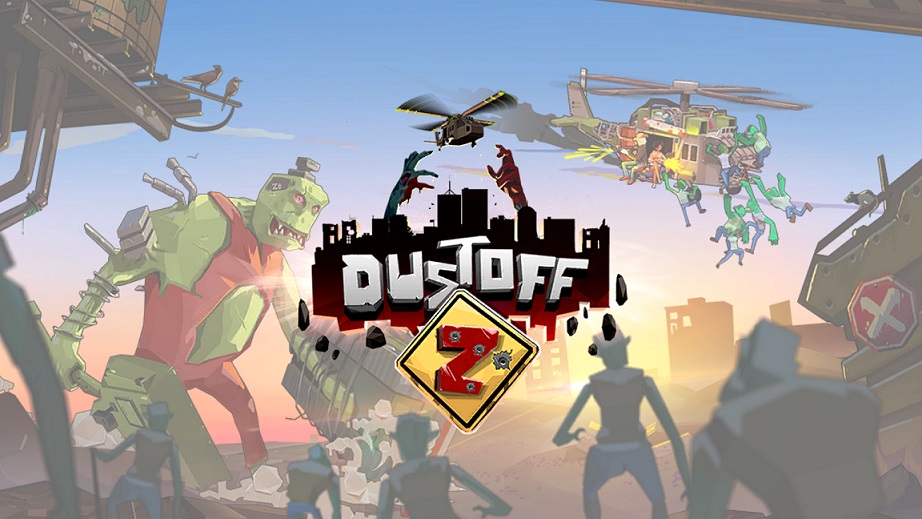 Oh no, there’s a zombie apocalypse! Whatever shall we do? Build a helicopter out of random parts and stock it with characters that might remind you of some movies you’ve watched, of course. That’s Dustoff Z. You fly a helicopter that doesn’t quite look right. Tasked with missions to save survivors, protect a base, and even destroy giant bosses, you upgrade your arsenal if you want to stand a chance. In a physics-based side-scrolling helicopter zombie game, you play various missions to earn money and parts to give you a more powerful vehicle. After a hard-fought mission, you return to camp to spend your points and choose new units. There are many types of zombies you’ll encounter and some as tall as buildings. Can you get all gold stars on the hardest difficulty? I can’t!

True Arcade Experience — There’s a lot to do and plenty to enjoy. You unlock helicopters, paint for them, and mercenaries to shoot from your rig. They can all be upgraded by gaining coins and materials. The best way to tackle upgrading early on is to do the daily missions. They allow you to play in short bursts. If you don’t have much time you can play for fifteen minutes or so a day and be able to max out all your stuff. It’s awesome to be able to drop into a game that quickly and get things done that make it feel worthwhile. Each mission has three difficulties as well as three stars to earn. Think of it like how mobile games such as Angry Birds took off. You play a short level and can replay it to get all stars that grant coins. It’s quick yet satisfying to complete the missions.

Some Kind of Zombie — Green grunting zombies? Check. That’s normal. There are also a ton of other versions to worry about. Take for example the red one which has a barrel of explosives on his back. He leaps at you like The Hulk! There are flying harpy-looking zombies as well as sharks that leap from the water trying to take you down. The more you kill, the more diagnostics you get. These lead to sweet awards and makes seeing the special zombies even more enticing. Besides a bunch of the smaller horde, you also have major boss battles where the creature is the size of a building. After your kill, you can take your trophy back to the base. Yes, there is some wackiness involved, but there’s no doubt the enemy types are pleasant to behold.

WMD — There aren’t any stats available for your weapons nor your characters. You can upgrade them and whatnot, but you have no clue exactly how effective they are against the zombies. Is the sniper better or the flamethrower? No clue here, I upgraded almost everything to the max and decided it’s more of a preference. It was just extremely hard to figure out what my damage output was. There is also auto-aiming, which got a bit annoying because the attackers never seemed to target the closest enemy. I like that there was variety, but I just need some basic statistics on my damage output in order to strategically choose my attackers. There was more randomness than I would have liked.

Handling — I suppose controls are supposed to be awkward in order to add a little bit of physics difficulty. It just seemed unfair most of the time. Trying to fly over certain objects was a mess. You bump into them while taking damage as you try to inch your helicopter over. Lacking skill dependency, it was almost like sheer luck. I oftentimes thought it was impossible to get over certain hurdles. But having nowhere to go, I would just hold up and right on my controller until I clumsily passed over it. There were times I had to restart the level because of a simple crate that stood in my way. There is a hook at your disposal, which you can use to pick up items or even bigger zombies. It’s often hard to see the hook and you’ll likely be pressing the button numerous times trying to get it to work. On the same subject, sometimes you must bring a zombie boss back to your base. The problem is trying to land if it’s underneath you. The body doesn’t vanish, so you have to move it again or nudge it enough to have room.

I was not overly satisfied or dissatisfied with my time flying a helicopter above leaping zombies. The graphics aren’t the best, but they don’t have to be. It’s all for fun. I would say it’s well worth a playthrough. The physics can be frustrating at times and ruin the speed of your run, and annoyingly cannot be mastered. There’s shortness involved with completing the game, but with all the unlockables, stars, daily missions, and difficulty options, there’s sure a lot to do after you’re done the first time through.

Dustoff Z was published by Zordix AB and developed by Invictus Games on Xbox One. It was released on October 15, 2020, for $14.99. A copy was provided for review purposes.